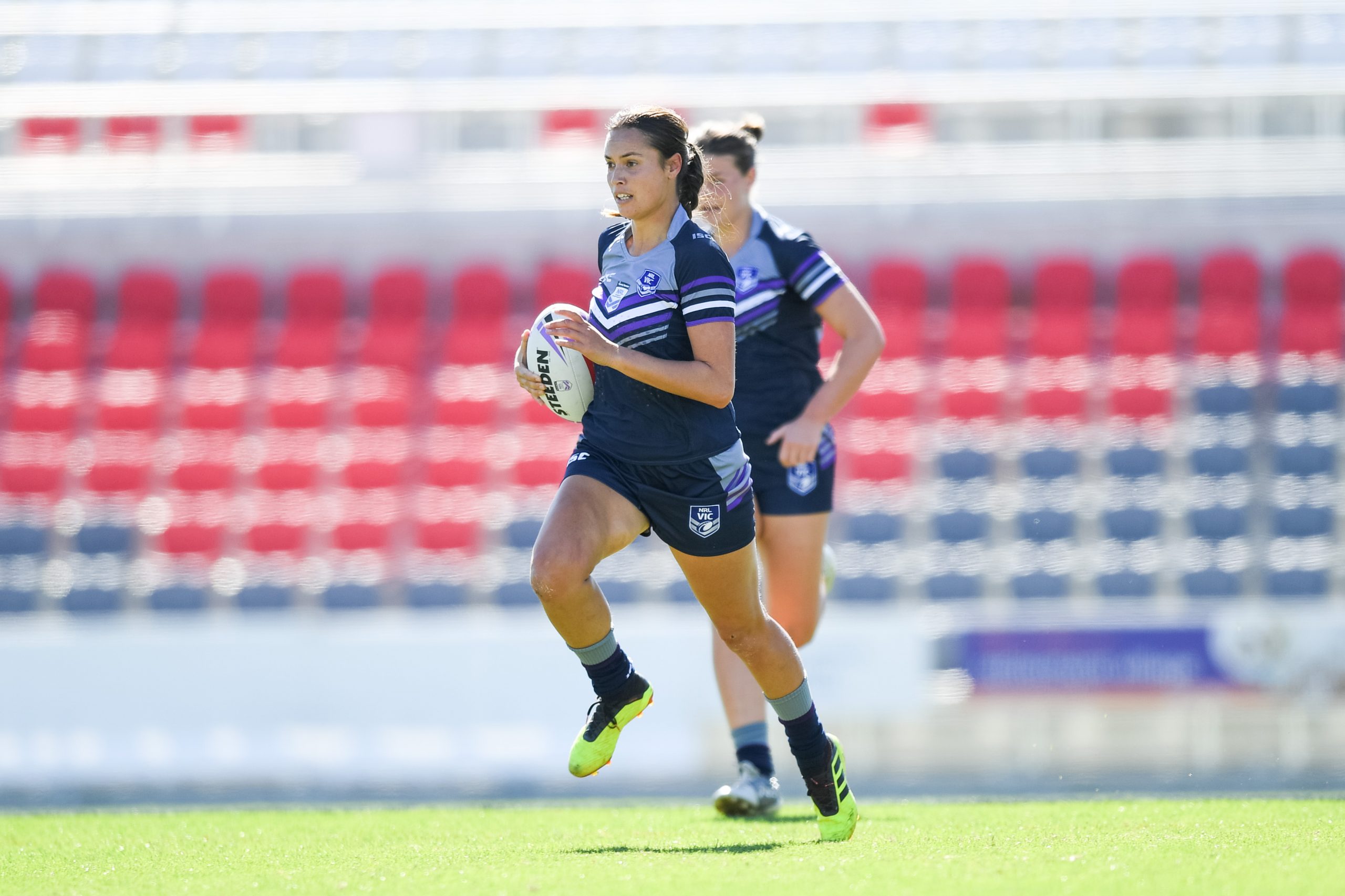 AFLW convert Brooke Walker needed one game of club rugby league to familiarise herself with the code before representing Victoria at the Harvey Norman National Championships this week.

The New Zealand-born five-eighth helped Victoria record back-to-back wins on day two with her light-stepping and agility on show in two strong individual performances against South Australia and Northern Territory.

Walker played for Carlton in the AFLW earlier this season but is now eager to turn her attention to rugby league and possibly become the first player to play in both codes at the top level.

“I grew up playing touch footy then I moved onto rugby sevens and was in their program for a while before AFLW started,” Walker told NRL.com from Redcliffe.

“Growing up in New Zealand, rugby league has always been quite big and when I saw the NRLW take off I’ve been in awe of the talent so wanted to have a crack in Victoria.

“It runs alternate to the AFLW competition so hopefully I can fit in both this year.”

The 26-year-old would be able to play in the NRLW if she’s picked up by a club given her AFLW contract expired in April.

She believes the National Championships acted as an important pathway step in enticing more players like herself to get involved in rugby league.

Female participation in Victoria is set to be boosted further following confirmation a $17 million rugby league state and community centre will be built in Melbourne by the end of next year.

The development will give NRL Victoria and Touch Football Victoria access to world-class facilities and enable the state sides to usher through the next generation of talent.

This year’s championships is the first time Victorian sides have featured as a standalone team at the event after previously being part of the Combined Affiliated States.

“Fingers crossed when the new facility is up and running we can have a clearer pathway for women and train with elite habits … it’s only going to do wonders for the game,” Walker said.

“The rugby league participation rate in Victoria is growing and a lot of women are looking to play more sport.

“Having two teams compete at these national’s is a great way show younger girls that you can represent your state and move your way up.

“It’s been a really fun couple of days so far. We were finding our feet a bit yesterday but today we knew what to expect and were better for the run.”

In the other matches in the open’s division, the First Nation Gems endured a mixed day, winning their first match before going down to Western Australia.

WA joined Victoria on two wins after beating South Australia, who showed improvement across their two matches in the morning despite the results not going their way.

In the under 19s draw, NSW’s City-Country sides and Queensland’s teams recorded comfortable wins with the quartet to face each other on Saturday ahead of the finals.

Among the other highlights of the day came through Northern Territory with a charging effort from Ciara Aigea getting the Titans on the scoreboard against the Rubys.