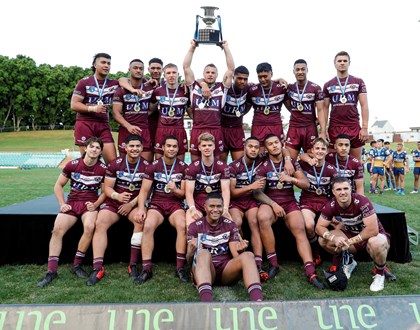 A masterclass performance from Manly Warringah five-eighth Latu Fainu has helped the Sea Eagles to a 24-12 win over Parramatta Eels in the UNE Harold Matthews Cup Grand Final at Leichhardt Oval.

Fainu was named both Player of the Match and Player of the Series after having a hand in four of the five Manly tries. The Sea Eagles took a 10-0 lead into halftime and it was a piece of Fainu brilliance that sealed the result when the Eels threatened to come back in the second half.

With Manly in front 16-6 in the second half, Fainu nearly poked his nose through the defence in his own end before backing up on the next play to throw a cut-out pass for winger Calvin Levy to score a long range try and put the result beyond doubt.

“Firstly, I’d like to thank all the coaches, we wouldn’t be here today without you,” Fainu said.

“I’d also like to thank all our family, friends and fans for supporting us.”

The Sea Eagles headed into the Grand Final as the form team of the competition, having remained unbeaten to finish the season as minor premiers.

The Eels had also been strong after dropping only one game all season, a 22-14 loss to Manly in the opening round back in February.

Both sides tested each other early before an accidental offside from Parramatta while defusing a kick in goal handed Manly a penalty in prime field position.

The Sea Eagles made the most of the opportunity when five-eighth Latu Fainu slipped a short pass for backrower Roy Quiroz-Mapusua to score. Oliver Cummins slotted the conversion for a 6-0 lead.

The eels looked a chance to get their first points of the match when Blaize Talagi broke the Manly defence with a show and go but he ignored the support on his inside and opted for a long pass for winger Suliasi Aho.

Aho had to stretch to reel in the pass which allowed the Manly defence enough time to arrive and tackle him into touch.

While the Eels were unable to capitalise on their opportunities, the Sea Eagles made the most of theirs after Lehi Hopoate put winger Revelation Sio over the line out wide to extend their lead to 10-0 at halftime.

Manly picked up from where they left off when play resumed after Fainu turned a ball back inside for his brother and Sea Eagles prop Samuela Fainu to sprint past the goal-line defence and score virtually untouched. TJ Herring added the extras and Manly were well in control at 16-0.

The Eels gave themselves some hope of getting back into the conmtest when Joshua Alhazim put Declan Murray over the line and Ethan Sanders landed the conversion to reduce the margin to 16-6.

Fainu put the result beyond doubt when he sparked a long-range try for winger Calvin Levy before laying on a kick for captain and centre Josh Feledy to score to make it 24-6.

The Eels grabbed a try right at the end through Talagi to help make it 24-12 but the day belonged to Manly.