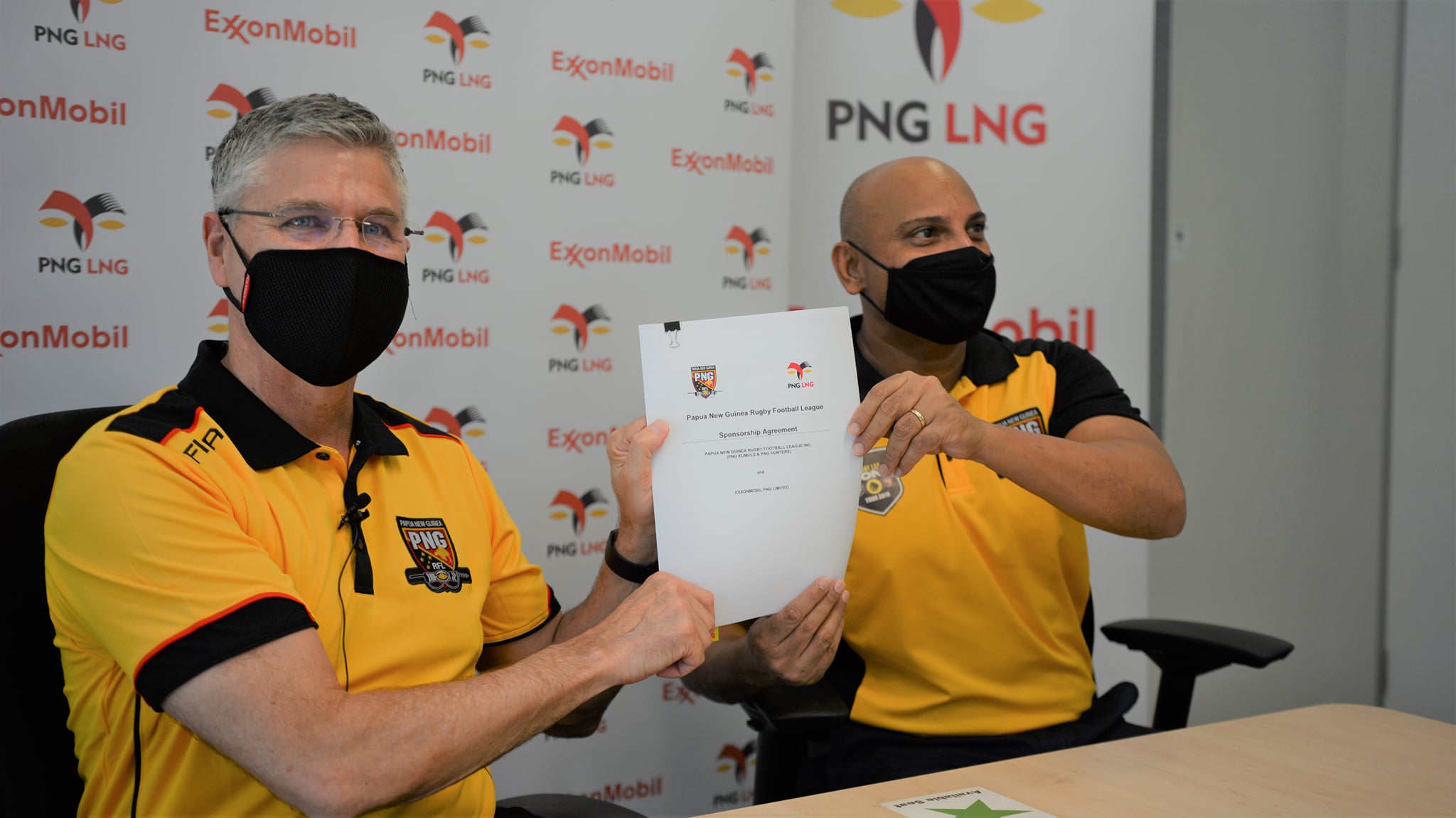 The PNG LNG Project, operated by ExxonMobil PNG, announced the renewal of its sponsorship of the PNG Kumuls Rugby League team and its domestic programs through a virtual signing ceremony in Port Moresby on Wednesday.

The sponsorship is for three years, 2021 to 2023 for the value of K5.4 million and allows PNG LNG to retain the Naming Rights of our national team, the PNG LNG Kumuls.

PNG LNG and ExxonMobil PNG started sponsoring the Kumuls team in 2013 to aid the development of rugby league in the country. The company is proud to see the team succeed in its various international competitions over the years and looks forward to the International Rugby League games starting in June leading up to the World Cup at the end of the year.

“We have had a shared goal with PNG Rugby Football League and the national government,” said Executive Director of ExxonMobil PNG, Keith Killian, “that is to support and develop the sporting code of rugby league in Papua New Guinea.”

“We value our partnership with the PNG RFL because we are two organisations that are committed to sharing our values of leadership, teamwork, respect, personal integrity and excellence.

“Rugby League is one aspect our support, the PNG LNG Project is delivering sustainable, long-term benefits for all project stakeholders, contributing to economic growth and strengthening the resilience of communities across Papua New Guinea,” Killian said.

PNGRFL Chairman Sandis Tsaka welcomed and was grateful for the continued partnership with PNG LNG and Exxon Mobil.
“This year all international fixtures look promising and are on track to commence in June leading up to the greatest rugby league showdown, the World Cup at the end of the year,” Tsaka said.

He said the tentative schedule for the PNG LNG Kumuls will see a Pacific Test against Fiji in June in Port Moresby and the PM X111 fixture against Australia in September also in Port Moresby.

“These schedules are being closely monitored in line with the pandemic protocols and travel restrictions,” Tsaka said.

The Chairman added that as part of its Naming Rights Sponsorship, PNG LNG has agreed to not only support the PNG LNG Kumuls Test Team but also the technical development and ‘Kids to Kumuls’ domestic programs.

“Since 2013, PNG LNG has not only backed our National team, they have been supportive in the development of coaches, referees and juniors from the grassroots, National Schools Rugby League Competitions, all affiliated leagues throughout the country and hosting the annual Senior Mens, Senior Womens and Under 20 Mens National Championships,” Tsaka said.

“We plan to have these programs started soon pending approval from the Pandemic Controller’s Office and PNG Sports Foundation following the success of the Digicel Cup competition in 2020. And play our part together in promoting important messages and awareness on this global pandemic”

“On behalf of all our stakeholders, valued partners and the passionate rugby league families throughout PNG and abroad, we extend our sincere gratitude for your valuable support and contributions to the PNG LNG Kumuls and PNG Rugby League for the next three years,” Tsaka said.