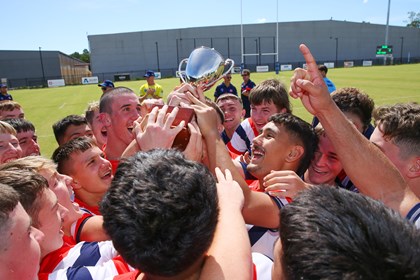 It was a low scoring affair in the Grand Final of the Andrew Johns Cup as Central Coast Roosters defeated Illawarra South Coast Dragons 14-2 at H.E Laybutt Field in Blacktown.

The scoring opened up after a late hit on five-eighth Caleb Hall gifted the Dragons two points after five minutes of play. From there, the Dragons started to build some momentum after gaining repeat sets and generating quick play the balls through the middle for their electric dummy-half Dextar Grant.

The Dragons defence was inspirational early although as they started to gain the upper hand, poor last tackle options hurt their chances at building pressure.

With points at a premium, the Dragons tried their hand down the short side and Roosters winger Amyn Hamilton scooped up an intercept. Hamilton looked certain to score until Dragons lock Kaide Pratt pulled off an incredible try saving tackle to keep his side in front.

After a high-quality start to the game, errors slowly started to creep in for both sides and the Dragons went to the sheds at halftime leading 2-0.

“That first half we were just hanging in,” Roosters captain James Miller said.

“We just had to be confident in ourselves and put a smile on our face and come back out and go after them.”

The Dragons looked to continue their dominance in the second half after their halves piled the pressure on with some brilliant kicking, keeping the Roosters pinned down in their own end.

In a bid to gain some field position, the Roosters quickly shifted the ball and put winger Jarrod Dan into space. Not to be outdone by Pratt’s previous try saver, Isaac Laughton chased down the Roosters speed man and bundled him over the sideline. From there, momentum slowly began to shift in the Roosters favour as the Dragons made error after error.

After finally finding themselves in attacking field position, Dragons Captain Clay Baldock had a kick deflected by Jake Elliott, who raced 95 metres to score the first try of the match for the Roosters and put them up 4-2 after 43 minutes.

The Roosters halves stayed composed and slowly started to build pressure on the opposition after a repeat set gave them ascendancy.

Points came in the very next after a brilliant long ball from Roosters Malachi Smith sent Tyrone Durrell crashing over. The conversion was missed and the Roosters led 8-2 with less than ten minutes to go.

The Dragons struggled to make their way back into the game after making three consecutive errors as the Grand Final started to slip away.

With one minute to go, Roosters half Zac Gillett scored a well-deserved try and Malachi Smith converted giving the Roosters a hard fought 14-2 victory.

Roosters skipper Miller was awarded man of the match honours following the game but admitted it was a whole team effort, even from those didn’t take the field today.

“Honestly, I give full credit to the boys,” Miller said.

“We had a good season where everyone had a hand in every game and every win that we had, no matter if they were playing or just training they still made an effort to help us out all the way.”

“When I got the man of the match trophy honestly I looked around at every other person that could have got it as well.”