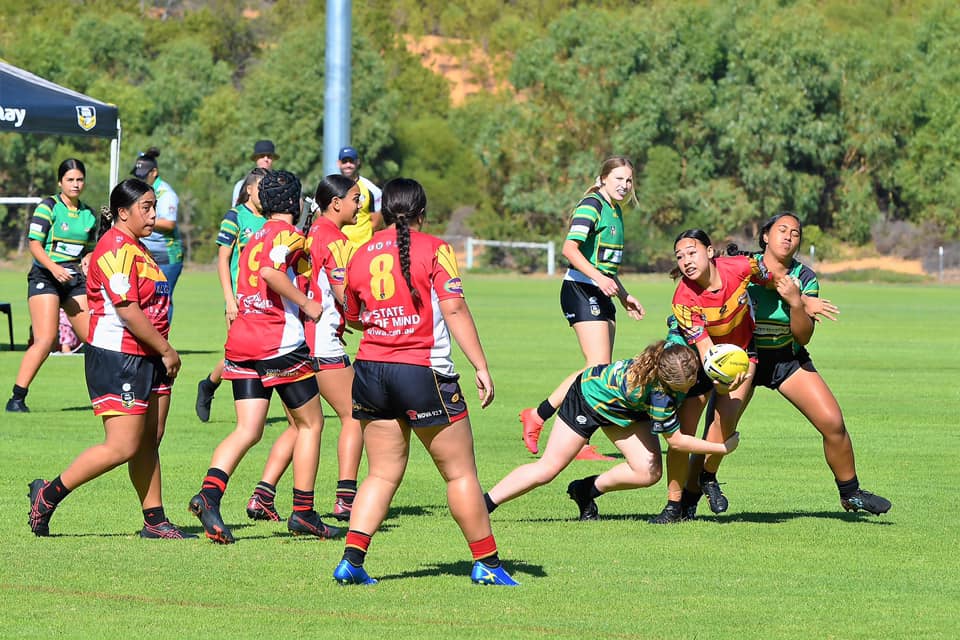 Southern Pride, through the heroics of their sharpshooting hooker Samantha Wood, scored a try on the hooter to win the first fixture for the Southern Pride 18-14, and while the second fixture was a 12-12 draw, the Northern Fusion would consider themselves unlucky not to have evened the ledger considering they scored 3 tries to 2.

Needing a dominant victory in the final fixture to secure the trophy, the Fusion girls burst out of the blocks in the first half, courtesy of tries to April Alan, Journey Kereopa and Keira Macaskill. Leading 18-10, plenty thought the Fusion would go on with the job in the second half, only for Lenoir Tairea’s Pride girls to turn up the heat in the second half. On the back of some silky offensive play making from Wood and the elusive Aliyah Tanonef, they rallied behind potent try scorer Shainai Proctor and scored 14 unanswered points to shut out the Fusion and take out the first ever edition of the Anneka Stephens Cup.

Southern Pride, who had won the John Moore Shield every year since its inception, Led in all 4 games they contested at halftime. Unfortunately whether through injury, fitness and fatigue, or maturity, they were unable to get the wins required and ended up with a win, a draw and 2 losses in the games they contested. Behind captain Trent Therkelsen, bookends Mathias Tomuli-Ah Khoi and Hugh McKay did their up most up front to get their side over the line, but alas they just weren’t able add the final touches.

South West Dolphins took a very young squad into the Under 17’s representative fixtures, and were incredibly gallant in their games, unfortunately just falling short of a victory in every game. They will however take solace from the performances of young Stacie Reweti and Taiatini Huriwai-Brown, who were more than capable playing against older competition.

Northern Fusion ended up going undefeated in this competition, counting 4 wins, with 3 of them being down at half time. Being the second half specialists they were, they came from the clouds in game 1, being down 18 points just after halftime to swamp the Pride. And soon every other game followed suit. After giving up leads to start games, they showed ruthless execution and a great free flowing style which allowed the likes of Bailey Millar, Tyler Ward and Ryan Woolley to run rampant when on the front foot. Deserved winners.

The Fusion, with a talent laden squad, were unable to gel properly in the short amount of time they were together and unfortunately proved their own worst enemy at times, with handling and unforced errors causing all sorts of issues for the ladies in green. Although they do have some promising up and comers such as Paihau Pomare, young Lillee Wearing and the talented Emysen Robinson.

The Pride ladies based their game plan on a very simple theme. Don’t give them the ball. And on the back of some forward dominant performances from Adalaide Faamausili Fala, Shiane Kani and Brianna Young, they played great simple footy and suffocated the Fusion during the games.

In all it was great to see so many young ladies showing off their skills and we hope they transfer that back to their rugby league clubs.

The “POD” as they are affectionately known, improved out of site throughout the series of games. Following a game 1 thumping 48-0, it looked to be a long month for the South West boys, but by the final fixture had improved immensely to record a 24 all draw. Fielding some impressive names in their roster, such as Brody Gilchrist and Kaelin Heremaia Phillips, it was a no nonsense forward Ross Lund and quick stepping fullback Te Putu Huriwai-Brown who caught the eye.

Southern Pride went into the Cash Converters Cup as heavy favourites, and it wasn’t hard to see why. A talented spine featuring First Grade heavyweights Tuakana Rangihaeata, Luke-David Wells-Talamavaio and Gethin Thomas, it was always going to be a task for the Dolphins to overcome. Eye catching performances from Nicholas Riggs really set the scene for the pride, who were to slick and powerful early on. All in all, a very succesful campaign for the Southern Pride sides.