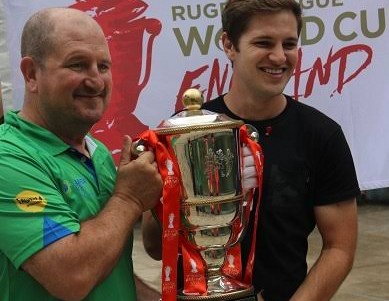 A Level 3 accredited coach who has proficiency in both Portuguese and English, Grundy is a frequent visitor to Brasil and has a son who has represented the Brazilian men’s squad.

Grundy has been a representative coach throughout Australian regional competitions, and to now has been the head of development for Brasil Rugby League.

He will replace Matt Gardner who, due to COVID restrictions and personal circumstance, has been unable to fulfil his duties as head coach.

“This has been an extremely difficult decision, but one made in the best interests of Brasil Rugby League for the future,” Chief Operating Officer Hugo Froes said.

“Unfortunately, 2020 has presented any challenges for us all and we sympathise that Matt has faced an exceptional combination of factors.

“Brasil is among the newest teams participating at the World Cup, and as time draws closer to the tournament, we are perhaps the nation with the most ground to make up in terms of player tuition, feedback and preparation.

“It is the opportunity of a lifetime and one we must grab with the fullest enthusiasm.

“We believe the strengths of Paul will improve the position of both the Amazonas national women’s team, and of Brasil Rugby League as a whole.”

Grundy has travelled extensively throughout Brasil, and has a son and grandchild that continue to live in the state of Minas Gerais.

He conducts online weekly mentorship courses in rugby league for those living in Brasil and will be present in the nation from the first round of selection trials in February.

“While I was looking forward to working with Matt through to the World Cup, it is a great honour to be entrusted in his absence,” Grundy said.

“I will give this role my everything, in the knowledge that a strongly-prepared Amazonas team will not only reflect well on the country, but also on the sport of rugby league, and the World Cup itself.”