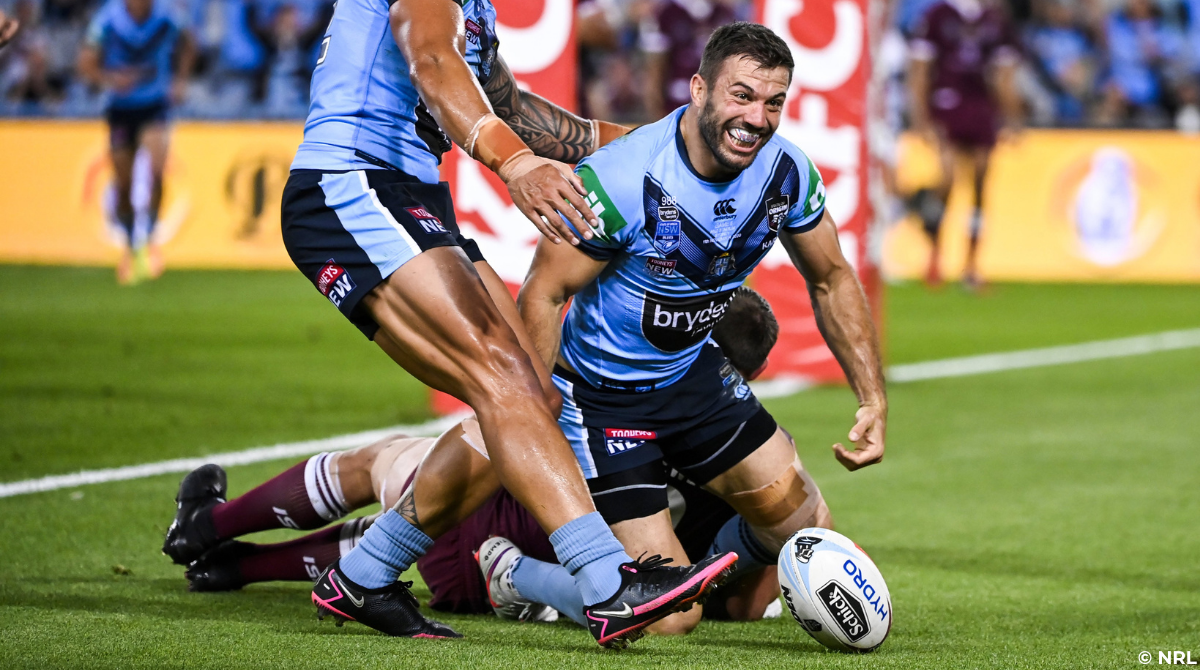 Kicked to the kerb for the past two weeks – with no less than Eighth Immortal Andrew Johns calling for him to be punted from the side – Nathan Cleary has booted the Blues to victory, a Suncorp decider and his finest hour yet on the game’s biggest stage.

Cleary came into game two branded a ‘flop’ by northern media, the donuts in his tries, try assist, line break and line-break assist columns from six Origin outings cited as just cause.

By full-time NSW had a 34-10 triumph and Cleary man-of-the-match honours.

The Panthers playmaker didn’t fill his boots in those standout stats, instead keeping a lethal right boot on the Queenslanders’ throat throughout.

Getting ahead of the rushing defence that has brought him undone more than once in big games, Cleary kicked long and early in the tackle count repeatedly, finishing with two forced drop-outs, a 40/20 and 473 kicking metres.

Johns, having called for Cleary’s axing after Origin I, paid his dues in commentary repeatedly throughout Cleary’s return to form, the 36,212 on h

and at ANZ Stadium doing likewise with every pinpoint punt.

“His kicking game tonight has been top notch,” Johns said.

“A couple of big plays with early kicks which changed the momentum but he is standing up, demanding the ball and they’re attacking to their right-hand side through Nathan.

“He has been super. Under all sorts of pressure and he’s really stood up.”

Coach Brad Fittler could only turn to a chuffed first-time skipper James Tedesco when asked if Cleary had silenced his doubters.

“What do you reckon?”

“He was good,” Fittler continued.

“His kicking was great. He made an error early where Munster caught it in goal and they scored off the back of that.

“Then he was faultless the rest of the game.”

For Queensland, their task was all-but insurmountable from the second minute when Cameron Munster’s head hit the ANZ Stadium turf heavily.

He did not return after undergoing his HIA due to his poor balance on the field after the incident, the Maroons reduced to 16 men as NSW’s dominance on paper transferred to the paddock.

It took some time though.

The Blues wore plenty before they got a true crack in Queensland territory.

It was Cleary splitting them open with a show and go for his first line break in the Origin arena.

His latest halves partner Cody Walker made the most of it and then some, dummying and spinning past Kurt Capewell as the Blues attacked his right edge for the first time, but definitely not the last.

No stranger to critics either, Walker’s recall to the sky blue scrumbase was his first since an infamous night at Suncorp last year saw him benched before his debut game was over.

More than once comparisons were made between the Cleary-Walker combination and the latter’s pairing with Adam Reynolds at Redfern.

Either way, Walker was a different man to the one that trudged off Suncorp 18 months ago.

“You can go back and he had a lot on his plate for his debut and he still had a big impact at the back end of the game,” Fittler said.

“I think he’s just grown up. He’s a real leader Cody. He wasn’t getting much luck. Patience.

“Adam takes a lot of the kicking. Cody just complimented Nathan, he had a couple of nice kicks again when they started to give too much attention to Nathan. They worked together really well.”

Up 6-4, Cleary then pinned Phillip Sami in his in-goal, earning a try assist a minute later for his troubles.

But the four-pointer was all James Tedesco’s.

A rather large left-foot step from the new Blues skipper split Ben Hunt and Felise Kaufusi after the latter stuck in his line to shoulder Cleary as he shovelled the ball to his No.1.

Another forced drop-out from Cleary – this time putting boot to ball on the second tackle – required a gutsy goal line shot from Gagai to keep Tedesco at bay.

When Coates was finally found wanting under the high ball – again courtesy of Cleary’s right boot – Josh Addo-Carr was stepping, then strolling over from the resulting scrum for an 18-4 lead.

Until the Storm speedster’s try there were shades of Adelaide in the Blues’ advantage, a mountain of possession and field position had not stacked up on the scoreboard.

Jack Wighton ensured straight after the break that there would be no more Queensland heroics, surging past Gagai to flip the script on their one-on-one duel from last week.

Another scrum at close range saw NSW exploit the Maroons’ backline defence once more, Daniel Tupou this time on the end of a slick Blues move.

Sandwiched between Tupou’s try and a consolation prize for Josh Papalii, a couple of sin-binnings from yesteryear for two enforcers of the future.

Payne Haas and Tino Fa’asuamaleaui traded punches as their teammates piled in at the 56th minute, Haas’s sky blue shredded in the scuffle before both were sent on their way.

Another four-pointer for Addo-Carr and NSW were too.

Steering them all the way to a live Origin III rubber, and a crack at three straight series wins on Queensland turf, Nathan Cleary and his right boot.