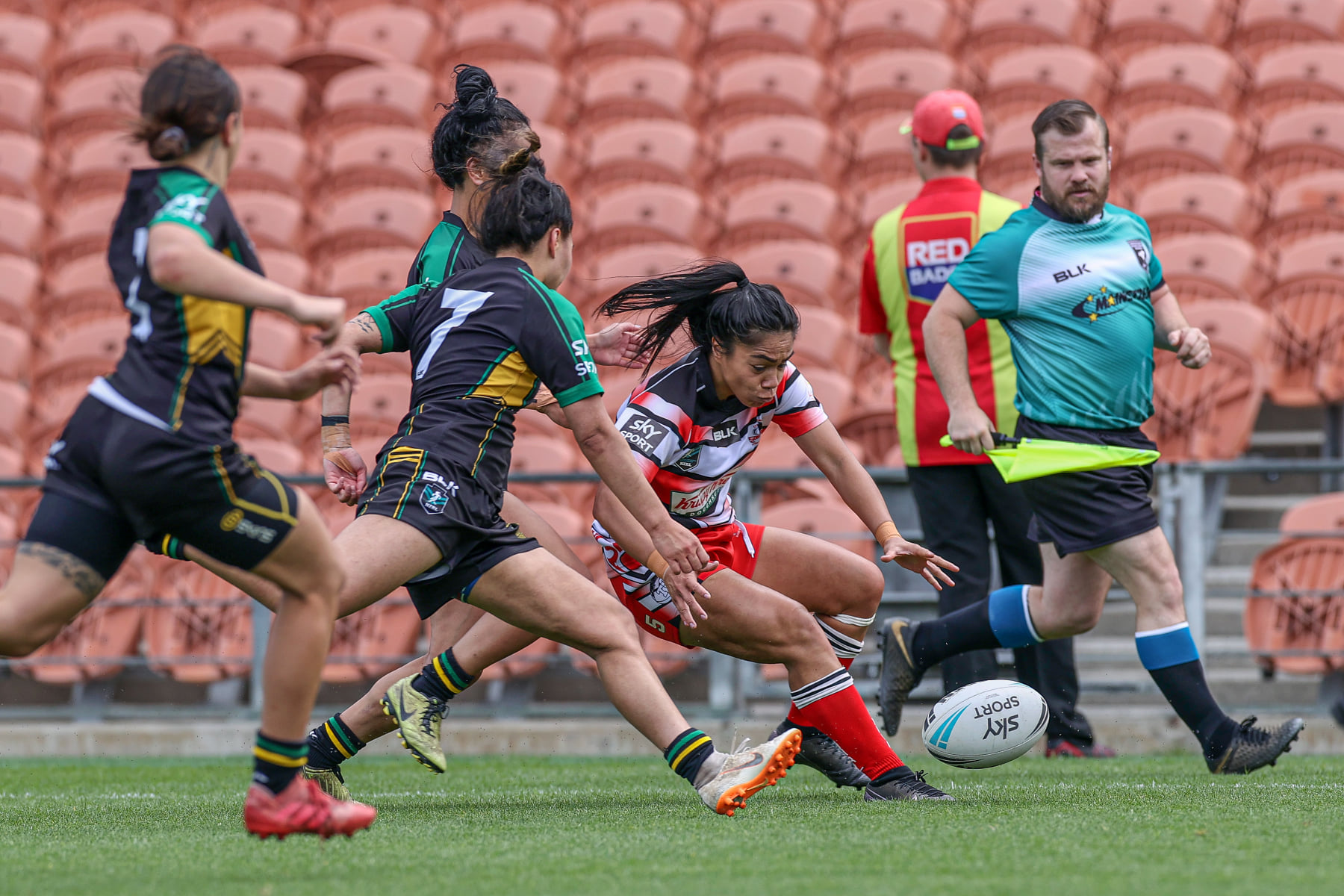 Taking on the defending Champions is always a tough task, especially for a team with many first-time league players but the Mid Central Vipers will have plenty to be pleased about posting 14 points against the experienced Stingrays side.

It was a messy start to the game and an error-ridden opening 10 minutes from both teams as they each tried to find their rhythm. Dropped balls and knock-ons prevented any sort of momentum for the Mid Central Vipers as they battled to match the physicality of the stacked Counties forward pack.

Fantastic go-forward from the Stingrays set Harata Butler up to put their first points on the board and it wasn’t long before the powerhouse prop crashed over for her second five minutes later, both converted by Kere Matua (12-0).

Mid Central struggled to get out of their 20 and when they did, the Counties defense proved too strong as they tried their luck with three attempts at the tryline coming out of dummy half.

Vipers half Corrineke Windle looked dangerous on many occasions and looked sure to cause some damage if she found herself in space. However, errors got in the way each time the side were able to get down into Counties territory.

Counties’ third converted try came on the back of a right-side sprint down the wing with Otahuhu Leopards centre Biddle crossing the line to extend their lead to 18-0.

Mid Central’s defense on the line held up well for several of the Stingrays try attempts but the footwork of Amber Kani and a pass to Malianive Taulanga had Counties add to their growing tally once again.

Unfortunately for the Vipers, the dominant Stingrays attack kept coming too with a hat-trick for Harata Butler in the 32ndminute and Matua adding to her near perfect conversion rate, 28-0.

But, just before halftime, Vipers hooker Paris Paul made sure their efforts didn’t go unrewarded narrowing the points gap to 28-6 with a successful conversion before heading into the sheds.

Only seconds into the second half, Butler stormed through a soft defense and it was Mary-Jane Finau who crossed the line for her side, try converted.

A hat-trick wasn’t enough for Harata Butler who minutes later, barged over the line for her fourth try and she didn’t look to be slowing down.

Mid Central’s perseverance was rewarded as they posted their second try of the game with nimble winger Naomi Hunt taking the opportunity out wide to close the gap to 40-10.

The Vipers’ error rate continued to drop as they looked to find some real momentum and it was Paris Paul who capitalised with her second try of the match as her team burst into celebration (40-14).

Although Mid Central’s attack started to find its form, their defense was left lacking and Counties exposed all of their gaps putting Kararaina Wira-Kohu through for another four-pointer.

Harata Butler was on the way to her fifth try of the match but selflessly passed to Taulaga who planted her second try of the day followed by another successful conversion to push the scoreline out to 50-14.

In a try that showed just why the Stingrays have made many appearances in the National competition’s finals, Kararaina Wira-Kohu cruised past the tryline as defenders took the bait being drawn wide in a beautiful shift play from the South Auckland side (56-14).

The defending champions’ 10th and final try came in the last minute of the match on the back of class act Krystal Rota’s kick chase for Marsters to pick up and plant. Counties Manukau sealed the deal with a successful conversion recording a 62-14 victory.

Despite the scoreboard, the Vipers will no doubt take a lot of confidence from the encounter scoring three tries against the powerful Stingrays who will progress to the final against the Akarana Falcons on 31 October at Trust Arena in Waitakere.

Counties will take on Akarana in the Sky Sport Women’s Premiership final on October 31st at Trusts Stadium.