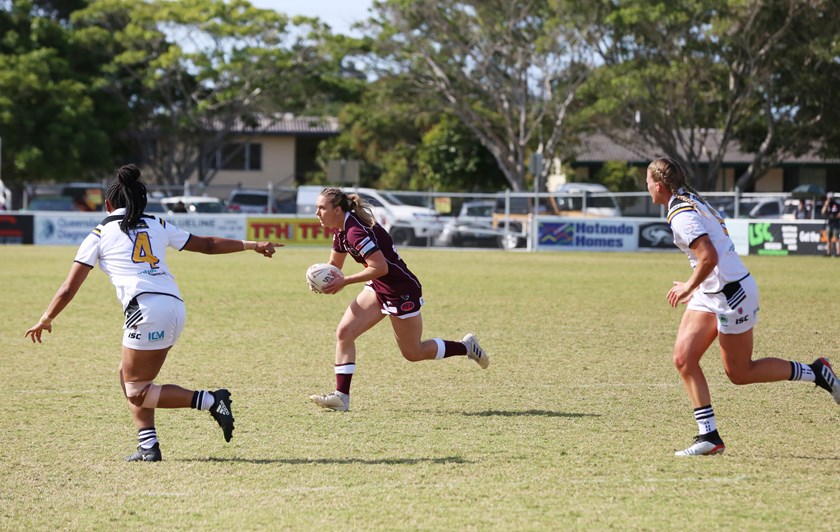 The Burleigh Bears proved too strong for Souths Logan Magpies in the Holcim Cup; claiming a 28-10 win in a physical encounter.

The Bears were physical from the get-go and once they hit an early lead, were never headed by the Magpies; despite a resurgence either side of halftime.

Bears coach Tahnee Norris said she was proud of the way her team had performed all competition and of the way they won the grand final.

“They worked so hard, ridiculously hard; and with all the changes throughout the season, they really committed to this year and even though with all the stoppages etc; I am super proud,” Norris said.

“I love defence, and I am always going to be one that puts defence at the top of the list, and I think that showed.

“The girls, they just really commit; you have to have a team of defenders, otherwise you are not going to win a game.

“(It was a) tough game, brutal actually, we lost a couple of players to injury and our captain (Jasmin Kemp) with a broken arm; but the girls just really fought through and I could not be prouder of them.”

The match started well for the Bears with the side regathering a short kick-off and working their way in over the try line through tough centre Tyler Birch, who was put into the space by five-eighth Lauren Brown in the opening moments of play to establish an early lead.

Souths attempted a counterattack with some set plays down their left side; but the Bears were full of intent in defence and were able to push winger Shae-Yvonne De La Cruz over the sideline. However, while the Bears gave away a penalty in the same play, they were still able to hold them out in the ensuing set.

Burleigh then furthered their lead with when winger Tarnisha Lyons scored the first of her three tries of the game, latching onto a pass from halfback Zahara Temara; a pattern repeated throughout the afternoon.

Although it was a defensively bruising match, the Bears found it easier than their opponents to make metres through the middle, with representative hooker Brittany Breayley’s touches helping push her forwards upfield.

The Bears went even further ahead on the scoreboard after some nice passing out the backline to Lyons who dove over for her second try with just over 20 minutes played.

Brown’s conversion attempt from the right sideline was a success to give the Bears an imposing 14-0 lead with halftime approaching.

The intensity from the Magpies then lifted as they knew a try before the break would keep them in the game. They were rewarded when Steph Hancock showed her experience to just charge over to score after the Magpies had found it hard to break the Burleigh line all half.

Meg Ward’s conversion was successful to put the scores at 14-6 at halftime.

As has been the case for most of the competition, the Magpies came out firing for the second half and scored their second try, thanks to a fantastic run from Ward.

However, that was the last of the tries of the game for the Souths Logan side who were well-contained by the Bears all afternoon; with the Burleigh defence able to nullify the attacking skills of player of the competition Tamika Upton, experienced half Ali Brigginshaw and hard-running forward Elsie Albert.

The Bears ran in three more tries to close the game, with Birch notching her double, Lyons her triple and Temara touching down for a well-deserved try of her own.

As well as Temara played, she was edged out by her halves partner Brown for player of the match, with the former rugby sevens player enjoying a successful tournament.

“Lauren and Zee they just did a fantastic job for us in sorting out those tries and those really wide tries; they did very well,” Norris said.

“I knew Lauren from rugby sevens and it was a bit of a score for us I think (for her to sign up with Burleigh), she’s got a lot of skill and she’s a really good chick too, so I think that was a really good plus for us, both on the field and off the field.

“She’s got a fantastic kicking game and she’s a local junior; her father and grandfather played for the Burleigh Bears, so there is that history there, it’s just great to have her and I am so proud that she’s actually come through unscathed for starters and actually loved it and played really well on that final.”