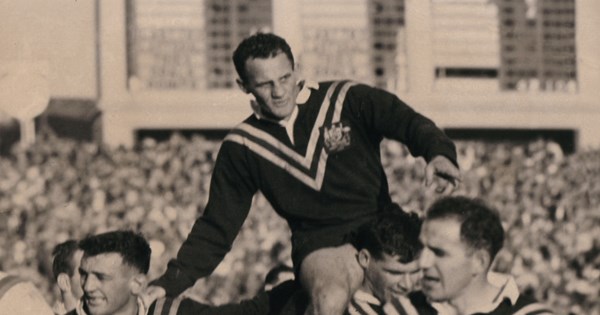 The aura around Arthur Summons shone so brightly because the former Western Suburbs and Test captain represented “not only everything about rugby league, but being Australian”, according to ARL Commission chairman Peter V’landys.

Summons, whose image makes up half of the NRL Telstra Premiership trophy with Dragons Immortal Norm Provan, died on Saturday night, aged 84.

“He wasn’t a man of tall stature … but what he lacked in size he had in heart, brilliance, and fierce determination,” V’landys said on Sunday.

“The most important thing for me from what he had was that he represents the great Australian mateship. He’s the mate we all want to have.”

Summons was a dual international having played rugby union for Australia before his nine Tests for the Kangaroos. He also played seven games for NSW Firsts in his four seasons with the Magpies and had the distinction of playing for both NSW City and Country sides.

In 1962 he played in all three Tests against Great Britain, including being named captain in the Third Test. In 1963-64 he was captain-coach of the Kangaroos that won the Ashes in England for the first time since 1911.

“He was a brilliant player. He won all five Test matches when he was captain – a remarkable effort. He was before my era but I didn’t realise how good he was until I saw some footage of his matches scoring length-of-the-park tries,” V’landys said.

“So for me it’s a very sad day not only for his family but for every rugby league fan. To Arthur – thank you very much for your great contribution to our game. You’re a man that will never be forgotten, especially considering you are on the greatest prize of all – the premiership trophy with your great mate Norm Provan.”

The bronze statue is named “The Gladiators” and is based on the iconic photograph of the pair leaving a muddy SCG after St George beat the Magpies in the 1963 grand final.

“Every time I saw him he had a great wit,” V’landys said.

“They were like a comedy act – Norm was the straight man and Arthur was the comedy man. I really enjoyed seeing them come together time after time to celebrate their great trophy.

“Arthur wasn’t a man who showed great emotion but deep inside he was exceptionally proud of being on that trophy. And really he was a great ambassador for the game. You couldn’t ask for a better role model to be on the trophy. He really portrayed class.”

The Dally M people’s choice award for the player showing sportsmanship and courage on the field is known as the Provan-Summons Medal.

The most recent winner was Bulldogs skipper Josh Jackson, but others on the esteemed list include Darren Lockyer, Nathan Hindmarsh, Jarrod Croker, Johnathan Thurston and Immortal Andrew Johns (five times).

The Wests Tigers issued a statement on Sunday morning to extend their condolences to his family.

“On behalf of all at Wests Tigers, I’d like to send my condolences to Arthur’s family,” Pascoe said. “We have lost a true giant of rugby league.

“Summons was a wonderful man and player in his time and helped to celebrate our great game for what makes it the best. He epitomises the importance what our game expects on and off the field and he will be remembered as for that.

“On behalf of all at Wests Tigers, Western Suburbs and rugby league as a whole, this is a sad day for rugby league but one that will also allow us to celebrate a wonderful part of our game’s history and the role Arthur played in that.”

A private service for Arthur will be held in Wagga Wagga later this week.