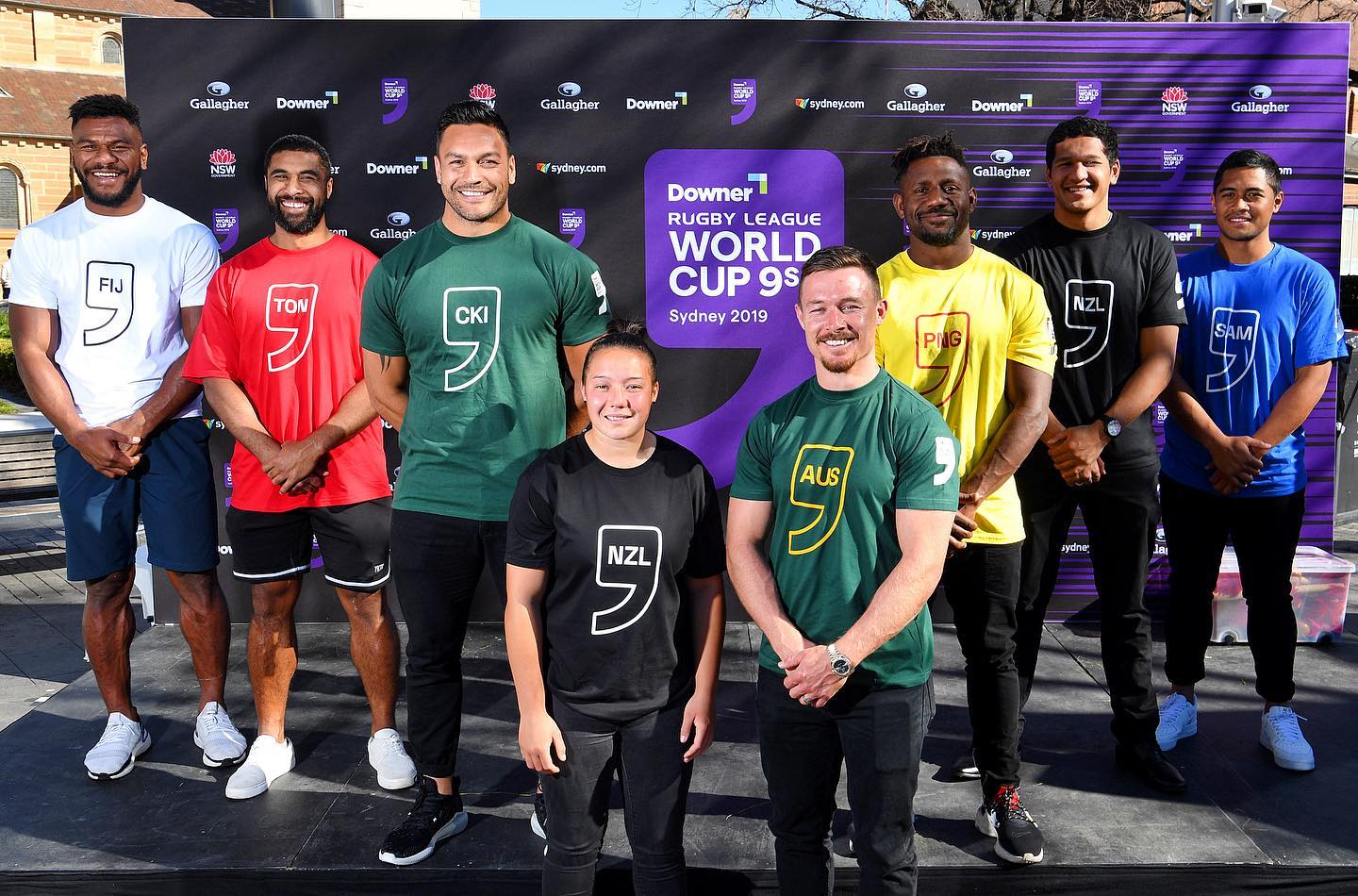 The RLIF has confirmed the three pools which will make up the inaugural Downer Rugby League World Cup 9s Sydney 2019, to be held at Bankwest Stadium in Parramatta on October 18-19.

RLIF Board Member and NRL CEO Todd Greenberg said today the format of the pools would ensure key rivals face each other in the fast-paced, action packed short form of Rugby League.

During the official launch of the tournament today in Parramatta, it was revealed that:

Mr Greenberg said the two highest-placed teams from Group A would progress to the semi-finals, alongside the winners of Groups B and C.

The two highest-placed teams from the Women’s pool, which features Australia, New Zealand, England and PNG, will feature in the women’s final.

He added all teams would play one match on Friday and a minimum of two matches on Saturday.

“The World Cup 9s will feature the most exciting players to watch in the game, representing their nations and their cultures,” Mr Greenberg said.

“It will be a festival of Rugby League and the fast-paced, frenetic nature of Nines will be fantastic to watch.

“This is Rugby League rebooted – a unique and exciting way to showcase our wonderful athletes.”

Mr Greenberg also detailed some of the key rules which will be in place during the Downer Rugby League World Cup 9s:

– A Bonus Zone, giving teams the chance for a five-point try, will be included
– A 20-40 rule, in addition to the 40-20
– A 25-second shot clock on drop-kicked conversions
– Golden Try in the event of a match drawn after regulation time

The Downer Rugby League World Cup 9s Sydney 2019 has been secured for Sydney by the New South Wales Government.

“What a moment for Bankwest Stadium to host this world-first event, and we expect more than 50,000 fans will be on the ground to enjoy it,” Minister Sidoti said.

“NSW is the proud home of rugby league in Australia, and the Nines will reinforce why teams and spectators flock here for the big games.”

Mr Greenberg said the support of Government as well as the RLIF was significant in allowing the Nines concept to prosper on an international stage.

Mr Greenberg also thanked both Downer & Gallagher for their partnership of the event which allows the NRL to stage this historic tournament.

The Chief Executive Officer of Downer, Grant Fenn, is thrilled that Downer is continuing its support for rugby league.

“When you bring together the game’s best players, international rugby league’s greatest rivalries and the excitement of the Nines format, you will get a great weekend of footy,” Mr Fenn said.

Sarah Lyons, Chief Executive Australian Broking at Gallagher, said: “Gallagher has been protecting Rugby League in Australia for more than 30 years and we are proud to lead the field as the game continues to evolve and grow.

“We are delighted to be a partner of this year’s Rugby League World Cup 9s competition which reinforces our longstanding connection with rugby league and our commitment to creating a safe, risk-aware environment for grass roots through to elite players and the clubs that support them.”

Two-day passes for the Downer Rugby League World Cup 9s went on sale today for Members, and will go on sale for the General Public on Wednesday (July 24).

Single-day passes will be available to purchase for Members from August 5 and for the General Public from August 7.

Tickets will be available via ticketek.com.au.

The 12 teams in the men’s competition and four teams in the women’s tournament will compete across 28 matches and 12 hours of action. FOX Sports will broadcast every men’s and women’s match live nationally across the two days of competition.