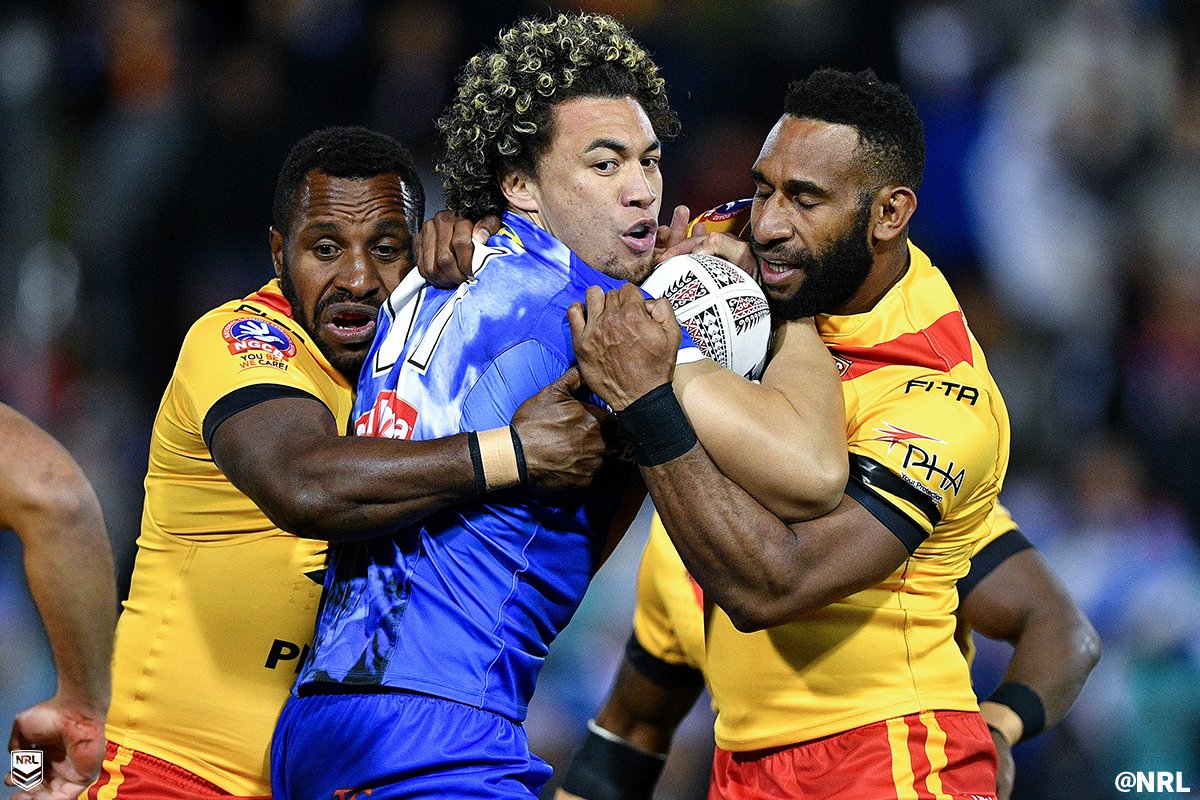 Toa Samoa have held their nerve late to secure their first international win in three years with a 24-6 win over Papua New Guinea in front of 8408 in Saturday night’s Ox & Palm Pacific Test at Leichhardt Oval.

A try to Junior Paulo with 14 minutes remaining killed off any chance of a Kumuls comeback after both sides arm-wrestled their way through the second half following a 12-6 halftime lead to Samoa.

Boasting the likes of former Kiwis representatives Marty Taupau and Jamayne Isaako for the clash, Samoa came out of the blocks fast but struggled to put the away the Kumuls through errors and ill-discipline.

The Kumuls were denied a four-pointer through Rahdly Brawa with the bench forward failing to regather a James Segeyaro grubber in-goal.

Samoa won the physical encounter but the Kumuls’ second phase and footwork troubled Matt Parish’s side throughout the contest.

Isaako had a shaky night under the high ball to spill two at fullback but Taupau’s impact in a Samoan jersey could be felt with the Sea Eagles prop churning out 157 metres.

Penrith utility Jarome Luai had opened the scoring to finish off a Josh Aloiai offload and weave his way past three PNG defenders to score next to the posts.

Samoan captain Anthony Milford showed some sharp footwork to go close to scoring shortly after but was hammered in a tackle by Enock Maki and Edene Gebbie.

There was no stopping Aloiai though in a strong opening stint as the starting prop linked with Luai again to run a strong line off the Samoan No.9 to race 15 metres and score.

Kumuls winger Terry Wapi took it upon himself to cross for the side’s only try, skipping past Anthony Milford and Herman Ese’ese to burrow his way over.

A freakish try to Chanel Harris-Tavita put the icing on the win when his field goal attempt hit the posts and the Kumuls let the ball roll around and the Warriors playmaker swooped.

In bad news for North Queensland, hooker Kurt Baptiste was helped from the field with what appeared to be a serious knee injury and Kumuls coach Michael Marum said post-match that the early diagnosis was not good.

“From medical advice we’ve received he’s probably done his ACL at this stage but we probably need to have proper scans in the next 24 hours and come up with exactly what the injury is,” Marum said.

I thought the boys did well in a tight game. We got off to a slow start to allow the Samoans to score two early tries but then we had control, we scored a try there.

“There were a lot of new boys in the side and for us we were looking at how they could handle the pressure at this level.”