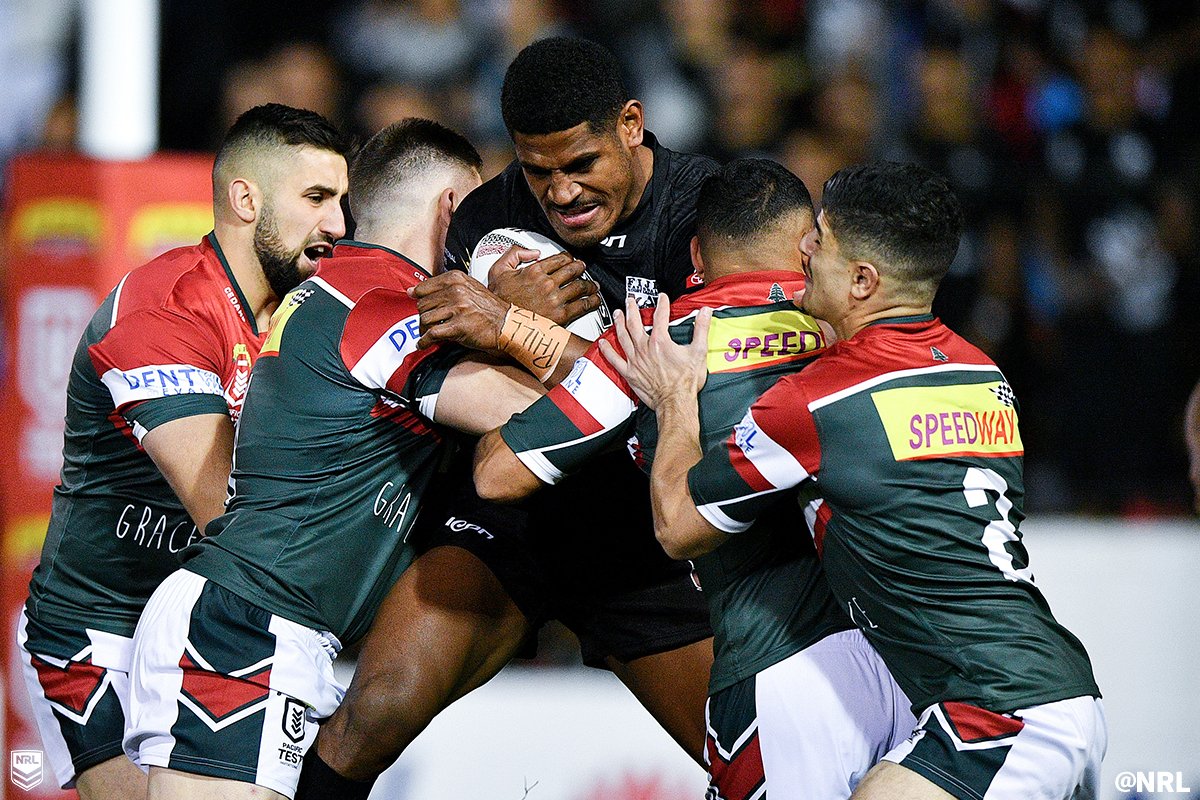 Maika Sivo and Suliasi Vunivalu scored entertaining doubles as Fiji Bati cruised to a 58-14 thrashing of Lebanon in the the Ox & Palm Pacific Test at Leichhardt Oval on Saturday night.

After a week of turmoil between the playing group and the Lebanese Rugby League Federation, the Cedars had no answers for a dominant Fijian side that produced six first half tries in a 24-minute blitz.

Two tries to Vunivalu and a four-pointer to rampaging forward Viliame Kikau set up the win with a 34-4 lead at halftime.

The Bati side were over for their second of the night nine minutes later when Brandon Wakeham delivered a crisp pass for Vunivalu to dive over in the corner.

Sivo had a night to remember in his maiden Test appearance with the Fijian flyer acrobatically collecting a Siti Moceidreke cross-field kick to plant the ball down for the first international try of his career.

Fiji Bati were over again four minutes later with Viliame Kikau tippy-toeing his way to avoid the sideline down one end to then using some late footwork to dive over untouched.

The scoreboard continued to keep up with the clock when Joe Lovodua split through the middle to find Wakeham in support for a dominant 28-0 lead.

Points continued to flow as Vunivalu dived over for a double despite a hint of double movement.

Lebanon finally crossed in the 38th minute with Canterbury hooker Michael Lichaa burrowing his way over the line from close range to get the Cedars on the board.

Our start won it for us. We were on right from that opening kick-off,” said Fiji back-rower Jayson Bukuya.

“It was a great effort from the boys and hopefully we can build on this. The goal is to eventually become a tier one nation and I think we’re moving in the right direction.”

Lebanon’s start in the second half started just as shaky as the first with Robbie Farah shanking a long-range kick to send it into the stands.

A hard-running Sivo grabbed a double in the ensuing set with the Fijian winger bulldozing Ahmad Ellaz to charge over the line.

The Cedars jagged a try back in the 54th minute with Manly winger Abbas Miski finishing off a well-placed Farah grubber to leap high and wrestle Marcelo Montoya to plant the ball down.

Lebanon enjoyed plenty of possession midway through the second half as Fiji lost their way with ball control and St George Illawarra junior Jacob Kiraz sent Miski over for a double just two minutes after taking the field in his first international.

Fiji quickly responded to the Cedars’ swing of momentum with Lovodua wrestling his way past Elie El-Zakhem for the side’s eighth of the evening.

Fiji were in on the action again shortly after to reach the 50 mark with newly-appointed captain Korbin Sims sending Bukuya over for a try with a deft short pass, before the Sharks back-rower finished off a long-range break on full-time for a late double.