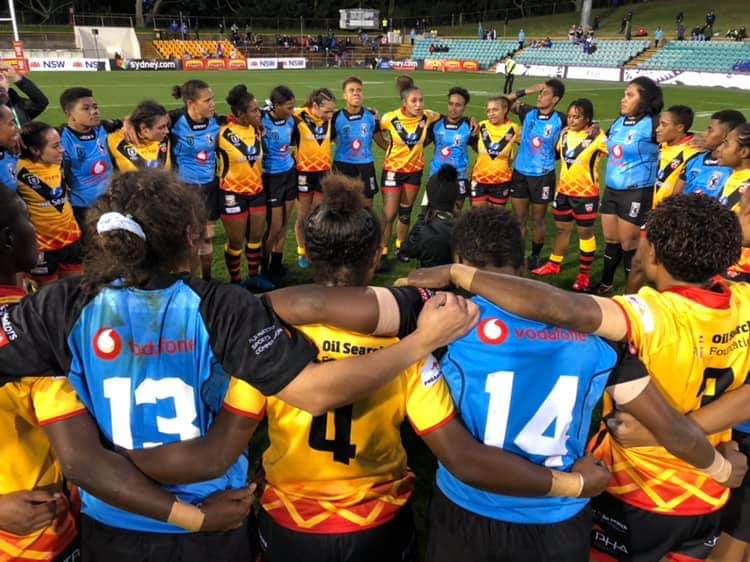 Fiji Bulikula have celebrated their maiden women’s international debut in style with 28-0 victory over the Papua New Guinea Orchids at Leichhardt Oval on Saturday.

The Fijian women’s national side, named after the golden cowrie shell, raced out to a 12-0 lead in the first half with two converted tries.

It was a disastrous start for the Orchids from the opening kick-off with confusion under the high ball handing Fiji an early opportunity to attack.

The Bulikula created a healthy overlap on the right edge to send Roela Radiniyavuni over for a 4-0 lead.

Fiji halfback Patricia Raikadroka made the sideline conversion look easy with a monster kick sailing over the black dot.

The Orchids muscled up in response and looked certain to score minutes later, when Jacobetha Wake danced down the sideline before being bundled into touch by a strong hit from Fijian utility Josephine Maejiirs.

PNG were into space shortly after through Wake again but the luckless winger had the ball stripped from her grasp by Raikadroka as she was brought down in a tackle close to the line.

Fiji’s strong defensive efforts were rewarded just minutes before the break with Asipau Mafi sending Asena Rokomarama over on the right edge.

Ateca Leiyamo ensured the Bulikula went to an 18-0 advantage when she burrowed her way over the line next to the posts.

Two brutal hits and a massive line break from Orchids prop Elsie Albert inspired the side with 12 minutes remaining. But the class of Asipau Mafi late helped extend Fiji’s lead out to 24.

A final try to Radiniyavuni just before fulltime, her second of the afternoon, ensured Fiji finished the game in a commanding fashion to make their mark as a nation that could potentially challenge for a women’s Rugby League World Cup debut in 2021.