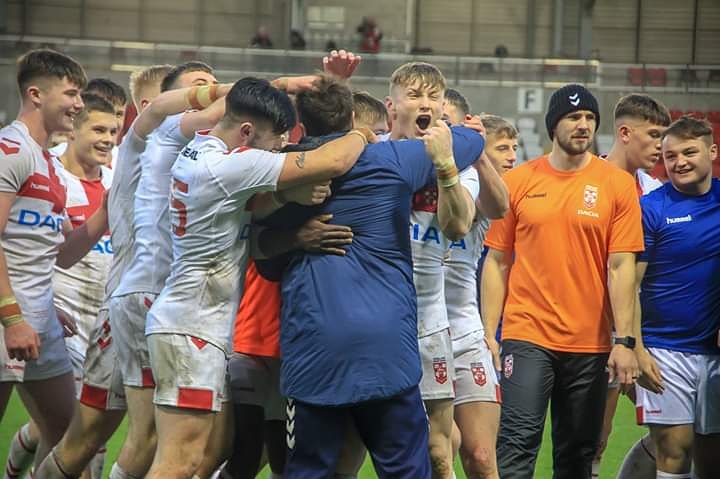 England Academy wrapped up a 2-0 series win over Australia Schoolboys following an 18-6 win at Emerald Headingley Stadium in Leeds this evening.

After stealing the show in last Saturday’s win at Leigh, St Helens academy player Jack Welsby impressed once again with a further two tries to his series tally.

But from one through 17, Dave Elliott’s side produced a composed and clinical performance to finish off a successful season for English Rugby League, following the Autumn International Series win over the Kiwis and the Women’s victory over France.

Harry Smith kicked England into a 2-0 lead on 11 minutes but the visitors took the lead eight minutes later as centre Star To’a got on the end of a deft kick into the in-goal area. Stephen Critchton added the extras for 6-2.

Then seven minutes before the break, Welsby bagged his fourth try in the two games against the Australia Schoolboys, to get the 1,557 strong crowd bouncing in bitterly cold conditions in West Yorkshire.

Minutes after Innes Senior had dropped the ball metres short of the line which would have been a certain try, full-back Welsby pulled off a moment of magic as he darted past the Aussies’ back line. Smith then knocked over an excellent touchline conversion for an 8-6 advantage.

Smith once again kicked the conversion and then a minute before the break, knocked over a superb 40m penalty to give England a 16-6 advantage at half-time.

The Wigan Warriors half-back stretched the advantage to 12 points with another penalty kick on 48 minutes as England edged closer to securing the series win.

England continued to dominate proceedings in the second half, and superb stubborn defence when required ensured the visitors were kept out for the remaining half an hour.