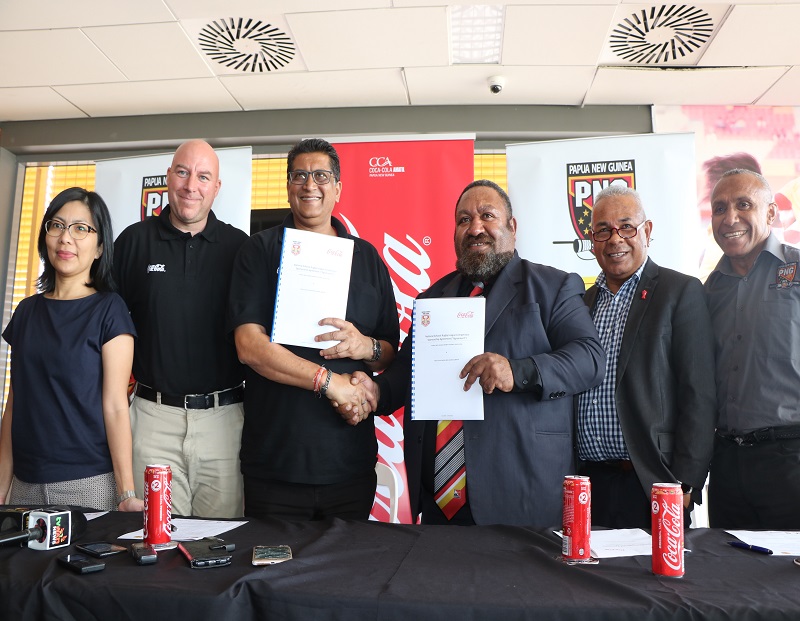 PNGRFL Chairman Sandis Tsaka said the PNGRFL was grateful to the world’s leading soft drink brand for their support towards this vital link in its pathway program.

“Today we formalise the Memorandum of Understanding (MOU) signed with Coca-Cola PNG Ltd in September as Naming rights sponsors of the NSRL competitions throughout the country,” Chairman Tsaka said. “This signing with Coca-Cola PNG is significant because investing into our young boys and girls is our future,” he said.

Tsaka said the NSRL program provided a pathway for young players both male and female between the ages of 14 and 18 in three divisions – Under 14, Under 16 and Under 18 – who must be in school, opportunities to aspire to becoming a Kumul or an Orchid and represent PNG at the International stage including the World Cup in England in 2021.

“Not everybody will make it to the top level but we must use the popularity and passion Papua New Guineans have for rugby league to encourage our young people and youths to embrace education and become better citizens and leaders of the future,” he said.

PNGRFL CEO Reatau Rau said his office is preparing the necessary documents and programs for the schools now in preparation for 2019. “As soon as the school year begins in 2019, we will send the necessary registration and affiliation documents for the schools to fill out and sign so all paper work is in order before they start their competitions,” Rau said. “And the plan is to hold the Coca-Cola National Schools championships during the Term 2 two weeks break in July,” Rau said.

He said prior to this, the Regional Championships in the four Confederates – Southern, Highlands, NGI and Northern – are scheduled to be held in June to select their teams.“And I can assure you it will be an experience for those selected to represent their schools and Confederates.”

Rau said the signing today ended months of negotiations and adherence to strict processes to meet the global requirements set by this renowned international company. “It was meticulous. The Coca-Cola National Schools Rugby League competitions in PNG will be tastier,” he said.

Rau said there will be further announcements of other partners joining the Coca-Cola National Rugby League Schools in the coming weeks. “We invite those Corporate organisations wishing to be part of this exciting Junior development program to get in touch with us,” Rau added.

The signing of this five-year agreement for the Naming Rights of the National Schools Rugby League (NSRL) competition marks a significant investment by Coca-Cola Papua New Guinea in the community of PNG.

General Manager for Coca-Cola PNG Ltd Joyonto Chaudhury said: “As in any country around the world, Coca-Cola has always strived to be a part of the fabric of and a positive contributor to communities where ever we operate across over 200 countries across the globe. This signing signifies an important partnership between Coca-Cola PNG Limited and PNGRFL to support National Schools Rugby League (NSRL) competitions in the country.

“Coca-Cola recognizes that Rugby League is not only a sport but more than that, it could be a force of positive inspiration to the young generation of PNG. As a good corporate citizen, Coca-Cola continues to look for ways to contribute positively to the community and for PNG, support for Rugby League via PNGRFL is just as natural fit as both organizations share similar vision and objectives of providing an exciting platform for the youth of PNG to bring out their best and excel”.