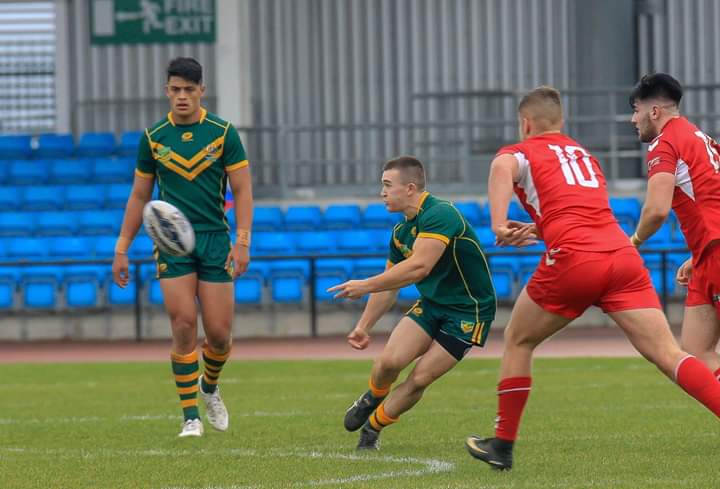 Schoolboys too strong for Lancashire

Lancashire Academy had the first and final word in this entertaining clash against the Australian Schoolboys, who in between crossed the whitewash for six tries to march onto their third-successive tour win in the build up to the First Test against England Academy next Saturday at the Leigh Sports Village.

Lancashire trailed 14-8 at the break were put to bed in the opening of the second half with a brace of tries including an intercept try within 28 seconds of resumption when winger Stephen Crichton completed his double.

Lancashire’s Tom Nisbett was impressive in both attack and defence at fullback and when switching to the wing, and both half backs Oliver Leyland and captain Ben Davies blended well together.

Josh Simm showed his potential in the centres and their pack match their counterparts tackle to tackle in which hooker Jake Wingfield was impressive in both his spells with ball in hand and leading his forwards around the field.

The Schoolboys were just that bit slicker with Tommy Talau, son of ex Saint Willie Talau, outstanding – involved in making four of his side’s tries and creating well always looking dangerous with halfback partner and skipper Jock Madden. The backs were slick in attack and the large pack didn’t budge against the hosts.

Lancashire sensationally took the lead after 72 seconds after Schoolboys fullback Tes Niu knocked on the high kick off by the hosts. From the scrum, three tackles later, Simm drove over from close range at the play the ball to give his side a 4-0 lead. Simm couldn’t add the extras to this or his other effort during the game.

The Schoolboys’ first effort with ball in hand saw them kick a crossfield ball dead but on their next meaningful attack on nine minutes they made Lancashire pay after second rower Matty Foster of St Helens couldn’t take a bullet pass on the crash with the line beckoning 20 metres in front of him.

The visitors went downfield and Talau created the change for Junan Compain who burst through on an angled run to score in the corner. Madden who went on to kick three from six attempts couldn’t add the extras.

It was end-to-end attacks but both sides couldn’t handle the ball at times and the visitors looking just that slicker; on 25 minutes they took the lead for the first time which they wouldn’t relinquish. Hooker Ryan Gray drove over from close range for a converted try after Lancashire had lost the ball on the halfway line.

Lancashire fought back five minutes later following back to back penalties putting pressure on the Schoolboys line. Nisbett put a brilliant cut out pass to his left winger Reece Hamlett to swoop over in the corner to cut the lead to two points.

The Schoolboys got their third four minutes later following a tryline saving tackle by Nisbett, but on the next play they went down the left and Talau’s super pass found Crichton to score in the corner.

Three minutes of the half saw the tackle of the game in a ‘David v Goliath’ moment as Lancashire sub hooker Aiden Roden hit and put down giant sub Franklin Pele one on one.

Resuming resumption Lancashire were attacking with momentum but Leyland’s offload was intercepted by Crichton to go in for their fourth try, then on 47 minutes Lancashire froze as Talau put a last tackle bomb up, he collected offloaded and quick hands later Bradman Best struck with an arching run and finished under the posts for a six pointer to make it 24-8.

The Schoolboys began to take control but of the game but, on the hour, following a bout of pressure, the hosts they had a lifeline as Wingfield’s cut out pass found Sam Halsall out wide to score.

Their hopes of a revival were short lived as five minutes later following a penalty maestro Talau put out a bullet cut out pass for Best to walk in completing his brace, Madden adding his third goal.

On their next set they should have increased their lead following a break from Max Altus, he unselfishly passed to Talau but a brilliant chase back and tackle by Nisbett stopped him.

Lancashire battled on and a four man tackle saw the Schoolboys Altus driven into touch when looking a certain scorer.

That gave Lancashire more momentum and two minutes from time following a penalty they got the try they deserved for all their efforts.