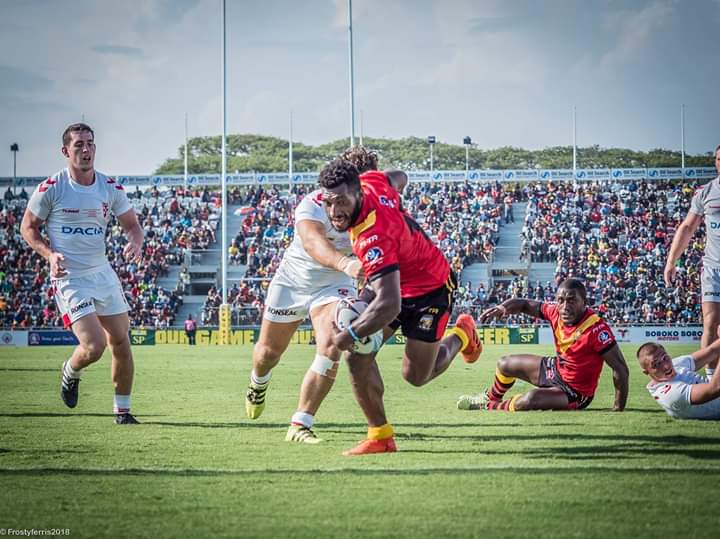 Papua New Guinea produced a stirring second-half fightback in Port Moresby this morning to square their two-match series against England Knights with a 32-22 win.

The Knights, who had won the opening game in Lae 16-12, looked on course for a repeat when slick first-half tries from Warrington’s Tom Lineham, Wigan’s Tom Davies and the Leeds full-back Jack Walker established an 18-6 lead.

But the Kumuls surged back with 24 unanswered points either side of half-time, and although Lineham gave the Knights fresh hope with his second of the match – and third of the series – the home team maintained their impressive record at the Oil Search Stadium, where they won three World Cup fixtures last year.

The Knights included seven Warrington players in their 17 after losing two members of last week’s squad, Dean Hadley and Liam Sutcliffe, because of illness.

And it was three of the Wolves who combined for the opening score in the 11th minute, as captain Jack Hughes offloaded to Harvey Livett who sent Lineham in at the left corner.

Yet another Warrington man, Dec Patton, added an excellent touchline conversion, and he then produced a superb cut-out pass to set up Davies’s try four minutes later – again goalling it himself for a 12-0 lead.

The Kumuls hit back with a Nixon Putt try between the posts which was converted by Watson Boas, but the Knights re-established their 12-point cushion when good work from the Hull KR half-back Chris Atkin instigated a move continued by Livett and Leeds’s Ash Handley for Walker to touch down on his international debut.

However PNG reduced their deficit in first-half stoppage time with a Justin Olam try, and then pulled level five minutes into the second half when Ase Boas touched down.

The momentum was with the Kumuls now and they took the lead for the first time through David Mead, the experienced full-back who was a Challenge Cup winner with Catalans Dragons at Wembley in August.

The game became increasingly tetchy, with Patton sent to the sin bin in the 68th minute, but while he was off a clever Atkin kick established some pressure from which Lineham touched down again.

However the Kumuls had the final word when Boas punished a high tackle from Joe Philbin by kicking a penalty.

The Knights will head home via Brisbane, and will attend next Sunday’s third Test between England and New Zealand at Elland Road.