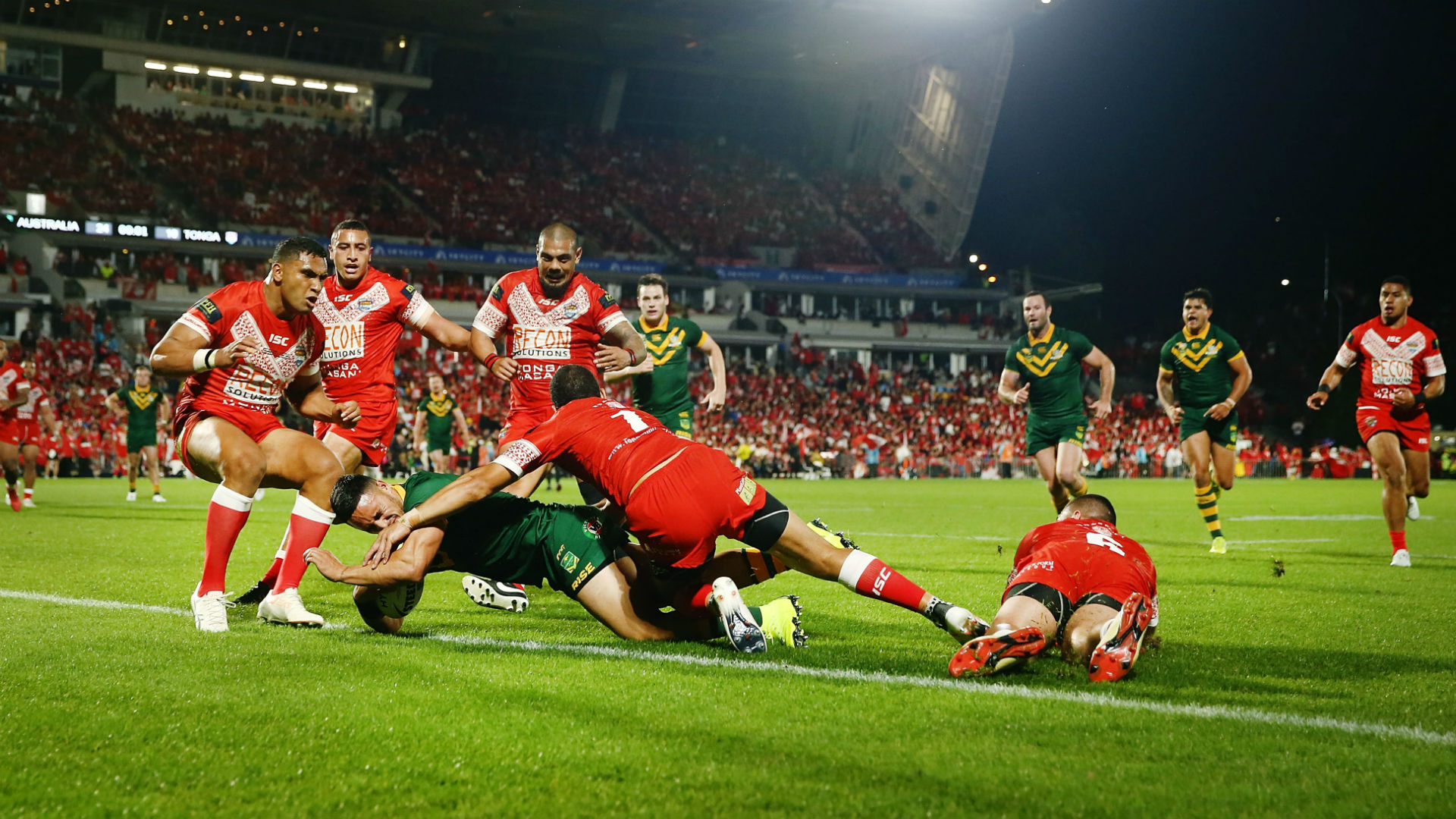 Plastered all over the walls in the Australian team room of their Auckland hotel this week were quotes from the Tongan players.

Things that have been said that question whether Australians share the same passion for the green and gold as the Tongans do for their jersey, and downplay the Kangaroos’ World Cup-winning feats last year.

Or this from Michael Jennings.

Quotes from two players who have donned the Kangaroos jersey in the past, among many that coach Mal Meninga put up in big bold font for all his players to see.

He wanted his players to know. So he stuck them around the team room.

While Australia has been somewhat of a sideshow this week such has been the hype and attention around Tonga in the historic occasion, Meninga wanted his men to understand that passion wasn’t just a Tongan right.

“The English meaning of the emblem of our jersey – Mate Ma’a Tonga – is ‘die for Tonga’. In other words, you love your country so much you would be prepared to give your life for it,” a quote from Daniel Tupou which was also put up in the team room.

Meninga rammed home the message all week, upping the intensity after a shock loss to New Zealand last Saturday.

And while there was far more passion for Tonga from the 26,214 fans at a sold-out Mt Smart Stadium on Saturday night, it was hard to argue there was much separating the two teams on the paddock.

Unfortunately, the contest didn’t quite live up to the hype or match the atmosphere in Auckland all week, with Australia cruising to a 34-16 victory.

But the result did little to silence a parochial crowd that had travelled from across the globe just to be part of one of the most anticipated Test matches in recent memory.

The opening try for the Kangaroos came through an error from Tonga, allowing Daly Cherry-Evans to pick up the spoils and sprint away untouched to the tryline for an early 6-0 lead.

James Tedesco then stepped inside an injured Ata Hingano to put Tom Trbojevic over in the corner and send the Australians out to a 12-point advantage in as many minutes.

But the Tongans hit straight back through Tevita Pangai jnr, who took advantage of some defensive indecisiveness from Cherry-Evans and Jordan McLean to stroll through a hole from a Hingano short ball.

Hingano soon left the field nursing an arm injury, with Australia compounding Tonga’s woes when Valentine Holmes stepped inside three defenders to grab his side’s third try of the night.

Cherry-Evans showed great vision to help capitalise an overlap down the blind side on the ensuing set, with the ball going through six pairs of hands before Tom Trbojevic notched up his second try.

Just when the match threatened to become a one-sided contest, the Tongans provided their fans with some hope when Daniel Tupou crossed in the corner following a brilliant flick pass from Pangai jnr.

But on the stroke of half-time a brain fade from Pangai jnr, who in the act of trying to stop a Holmes try made contact with the Australian winger’s head with his boot, gifted the Kangaroos a possible eight-point try.

Holmes missed his first sideline conversion but nailed the one from in front to send Australia into the break with a 30-10 lead.

Solomone Kata scored the first try of the second half for Tonga, but any hope of a come-from-behind victory faded when James Tedesco scored out wide for a 34-16 lead with 16 minutes remaining.