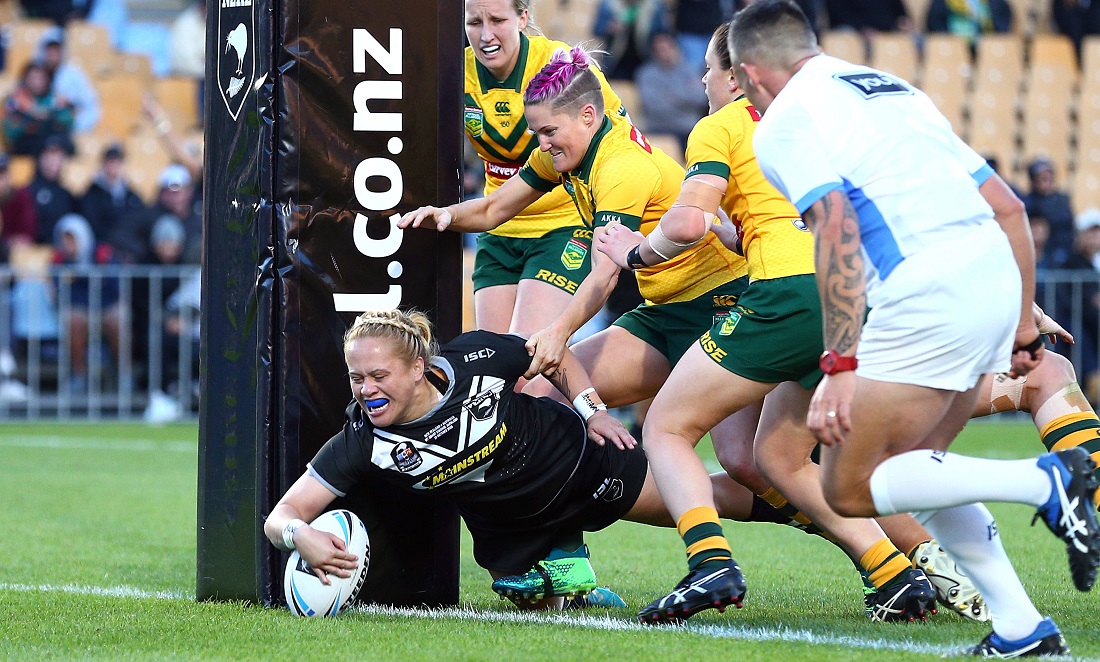 Kiwi Ferns go down in thriller to Jillaroos

The Jillaroos take home their first win in New Zealand for 19 years with a 26-24 defeat of the Kiwi Ferns in another epic clash between the two nations at Mt Smart Stadium on Saturday.

Ballinger, who was a member of the Brisbane team which won the inaugural Holden NRL Women’s Premiership, was named player of the match in her farewell Test for Australia as the Jillaroos overcome the loss of star St George Illawarra forward Kezie Apps.

With the teams scoring five tries apiece, the goal kicking of fullback Chelsea Baker proved the difference but she missed her last two attempts and appeared to be affected by a groin injury.

The Kiwi Ferns were also hit hard by injuries and lost halfback Kimiora Nati with a knee injury in the first half and co-captain Laura Mariu to a shoulder problem after the interval.

They also had to overcome a controversial refereeing decision but managed to fight back from a poor start to lead until five minutes from fulltime when Sydney Roosters centre Isabelle Kelly scored her second try to snatch victory.

Brigginshaw then scored herself eight minutes later after stepping her way over the try line to put the Jillaroos ahead 12-0.

The first sign of the fightback from the Kiwi Ferns came in the 22nd minute when veteran Honey Hireme raced down the sideline and hurled a pass inside but the touch judge ruled she had put a foot into touch.

With Hireme having raised the crowd to their feet with her run, there were howls of protest when the incident was replayed on the big screen but the decision could not be overturned and a chance went begging for the Kiwi Ferns.

However, the home team got on the scoreboard soon after when Dragons playmaker Raecene McGregor put winger Langi Veainu over for the first of her two tries with a cut-out pass in the 30th minute.

The celebrations for Kiwi Ferns were short lived when halfback Kimiora Nati suffered a knee injury in the following set of six and while she bravely tried to play on the player of the NRLW grand final had to leave the field in the 33rd minute.

Despite the loss of Nati, the Kiwi Ferns continued to build momentum after halftime and they scored their second try in the 44th minute when Annetta Nuuausala crashed over.

Fullback Apii Nicholls again missed the shot at goal but put her side ahead for the first time in the match when she regathered a kick from McGregor to put Veanu over for her second try and converted in the 47th minute.

The Jillaroos hit back almost immediately when Sydney Roosters second-rower Tazmin Gray, the sister of Kiwis and Canberra winger Jordan Rapana, managed to force the ball over the try line in the 51st minute.

The Kiwi Ferns lost Mariu in the 55th minute but managed to level the scores in the following set of tackles when Brisbane forward Teuila Fotu-Moala sent centre Maitua Feterika racing for the tryline.

The teams continued to trade tries, with Kelly running 70 metres to score for the Jillaroos in the 56th minute after skipping out of dummy half and fending off an attempted tackle by Nita Maynard.

With Baker missing the conversion, Warriors prop Amber Kani appeared to have snatched victory when she used late footwork near the tryline to score in the 70th minuite but Kelly ensured the Jillaroos maintained their recent domination over the Kiwi Ferns when she finished off a backline movement five minutes before full-time.