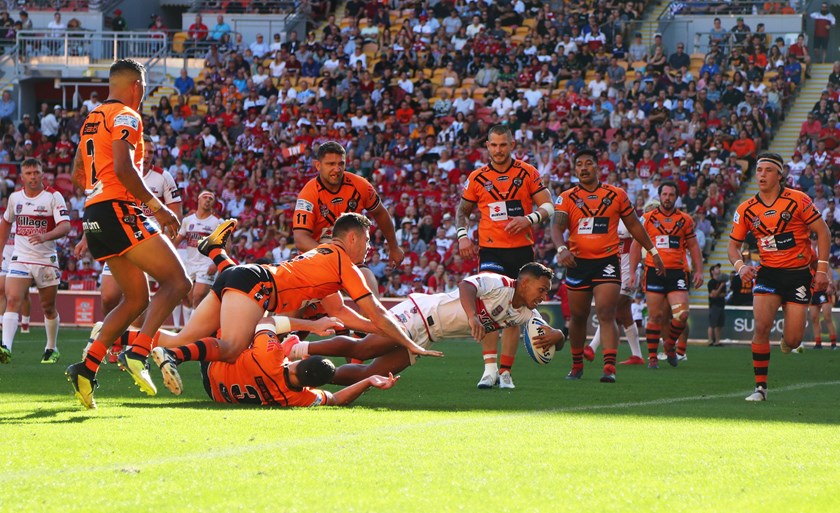 As the song goes, he got knocked down, but he got up again. You ain’t never gonna keep him down.

After being heavily targeted early in the game, pint-sized fullback Trai Fuller flipped the 2018 Intrust Super Cup grand final on its head with two sensational tries.

In the end Redcliffe ran out 36-22 winners to claim an unmatched sixth premiership in the competition, ending a run of three grand final defeats since their last title in 2006.

Diminutive custodian Fuller was welcomed to the game with three bone-crunching hits and it seemed clear Easts’ big men had a target painted on his chest.

Albert Vete took it a step too far in the 10th minute and earnt a penalty for hitting the dangerman off the ball, allowing Redcliffe to go ahead 2-0 via the boot of Kotoni Staggs.

Easts fans would have feared having their pants pulled down for the fifth grand final in the past 23 seasons, but winger Conor Carey found fortune when his shorts were lowered as he crossed the line in the 13th minute.

Carey latched on to a sublime looping pass from Scott Drinkwater to dot down in the corner, with a sideline conversion from Brayden Torpy making it 6-2 to the Tigers.

However, Fuller wrenched back a share of the lead when half Cameron Cullen wrong-footed the defence, eked out an offload and his fullback twisted through two defenders with the elasticity of a yogi.

Bodies were dropping everywhere for Easts at this point, losing five-eighth Billy Walters to a high ankle sprain and hooker Tommy Butterfield to a facial laceration.

That left the Tigers bereft of playmaking options at times and, although they scored another first half try to Marion Seve out wide, by then Redcliffe had surged ahead with a four-pointer to Jeremy Hawkins and a penalty to Staggs.

Leading 14-10 at the break, the Dolphins then blew out to a lead they wouldn’t surrender when Fuller stepped inside Drinkwater and Patrick Kaufusi to fabricate a try from thin air.

Staggs converted again and then added a spectacular try of his own four minutes later when teammate Aaron Whitchurch batted a ball in millimetres from the deadball line.

That made it 26-10 and though Easts tried valiantly to the end with further tries to the ever-dangerous Drinkwater and captain Jake Foster, Redcliffe always found a right of reply.

Former South Sydney junior Toby Rudolf was a standout in particular, tireless and destructive throughout the contest, winning the Duncal Hall Medal for being best on ground.

Rudolf will join the Cronulla Sharks from next season.

By virtue of the victory, Redcliffe will now play the Bulldogs in a curtain-raiser to the NRL Grand Final, vying for the Intrust Super National Championship.

For Fuller, a product of tiny Eidsvold in the South Burnett region, it will be the end to a remarkable season in which he started down the pecking order at the Dolphins, playing more games of local Brisbane Rugby League than in the state competition.

Dolphins forward James Taylor will have a nervous wait on his availability for the national final, having been placed on report in the second half.