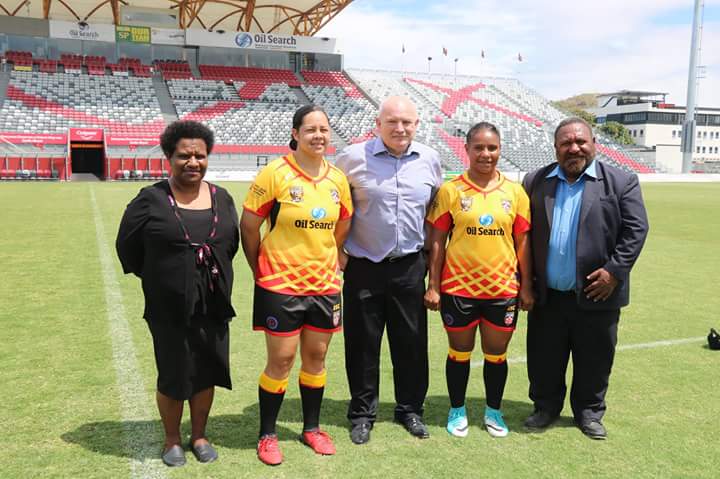 Jenni-Sue Hoepper has been named captain of the Oil Search PNG Orchids and Carol Humeu as the vice-captain.

Coach David Westley made the announcement today in Port Moresby. He said Hoepper brings with her a wealth of experience in the game and is a proven leader both on and off the field.

“She has been involved in the game for a long time and has played at the highest level for both Queensland and Australia. I have every confidence in her to lead this team into the future,” Westley said.

“Jenni-Sue leads by example and does exactly that both on and off the field,” the coach added.

Hoepper, 24 whose mum Mary Arava is from Aroma and Kairuku in Central Province and dad Tony from Australia was speechless when told of her appointment.

“I thank God for guiding me in this journey and am honoured to captain the Oil Search PNG Orchids,” Hoepper said.

“It is a blessing and I will give it my best for my family and my fellow Papua New Guineans.

“My priority and first choice between PNG and Australia will always be to represent Papua New Guinea,” she said.

Hoepper started playing rugby league as a 10 year old with clubs in the Townsville competition.

She was the first female winner of the Dally M medal in 2015. She has represented Queensland and Australia including winning the 2013 World Cup in England.

Carol Humeu said she was honoured to be named vice captain.

“I wish to congratulate Jennie-Sue as captain and am looking forward to learning and working with her in leading the Orchids and representing PNG,” Humeu said.

The 23 year old of Simbu, Wabag and Central parentage led Southern Confederates win the 2018 National Women’s Championships. She plays for the Butterflies in the Port Moresby competition.

Humeu represented PNG in last year’s inaugural match against Australian Jillaroos and was a member of the Oil Search PNG Orchids team at the 2017 Women’s Rugby League World Cup in Australia.

“All the best in Brisbane this weekend. We are all behind you,” Botten said.

The Oil Search PNG Orchids leave for Brisbane on Friday (August 31) morning to prepare for their clash against the Brisbane Broncos Women at 1.30pm on Sunday at Suncorp Stadium.

The game will be televised live by EMTV.