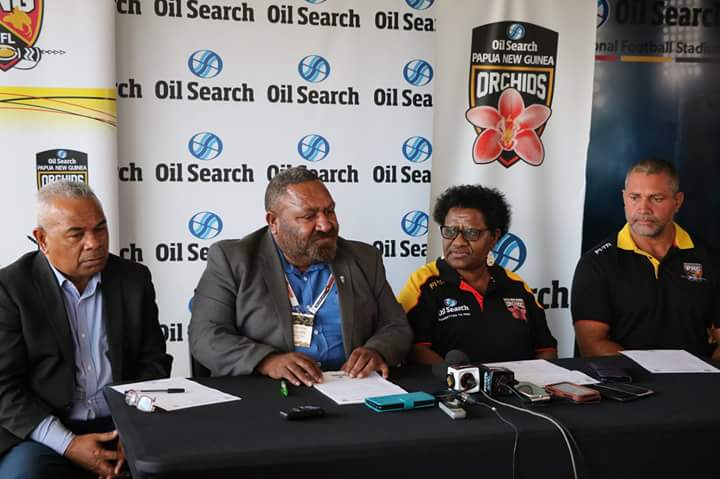 PNGRFL Chairman Sandis Tsaka said both appointments were endorsed by the PNG RFL Board at its meeting over the weekend.

Tsaka said the main objective of the PNG Orchids EMC is to assist the PNGRFL Board, management and the Oil Search PNG Orchids team plan, manage and deliver including preparations and participation at all International programs.

“The PNGRFL board is confident that Ruth Waram, a very experienced journalist and public relations executive will ably lead the Orchids EMC to continue the development of Women’s Rugby League in Papua New Guinea,” Chairman Tsaka said.

“And it is appropriate and fitting that Waram, who has been with Oil Search for 16 years as its Communications Manager is Chairperson of the PNG Orchids EMC,” Tsaka said.

“With her experience in the media, she will bring the image and profile of our national women’s team to another level. And rugby league being the National sport, Ruth Waram’s appointment not only recognises equal gender participation in the administration of the game but should motivate and inspire our women across the country to participate,” Tsaka added.

Waram thanked the PNGRFL for their confidence in her to lead the Committee.

“We thank Oil Search for being the inaugural naming rights sponsor and we invite other partners, who have the same belief in women’s development to support the Oil Search PNG Orchids on our journey,” she added.

“We are also very excited that the Oil Search PNG Orchids and Brisbane Broncos game will be televised live in PNG by Channel 9 via EMTV,” Waram said.

Other members of the Orchids EMC will be announced soon once they are confirmed.

“David (Westley) has got the right credentials to lead the Oil Search PNG Orchids to greater heights,” he said. “He is a qualified coach. David has played the game at the highest level and his experience in coaching since his retirement at junior level in the NRL programs in Australia is impressive,” Tsaka said.

The Chairman said his duties start this weekend when the Women’s National Championships are held in Port Moresby. “We have the best women players representing their Confederates for the National Championships title and the National selectors along with Westley will be selecting a team to represent PNG take on the Brisbane Broncos Women’s team in Brisbane next week,” Tsaka said.

He said the Women’s Championships is going to be a huge spectacle.

“Our women have proven they can perform at the international level and I expect the standards and performance this weekend in Port Moresby to be exceptional,” he added.

He said the finals of the National Women’s Championships will be played on Sunday August 26 as a curtain raiser to the Digicel Cup preliminary final between Giru Waghi Tumbes and Goroka Bintangor Lahanis.

Coach David Westley thanked the PNGRFL Board for their confidence in this important appointment. “I am proud not only as a coach but as a Papua New Guinean and will give it my very best,” Westley said.

Westley said the Oil Search PNG Orchids team will be announced on Monday and will go into camp. They travel to Brisbane next week for the 1.30pm match against the Brisbane Broncos Women’s Rugby League team at Suncorp Stadium.

He thanked the management and staff of Oil Search Limited for their continued support and partnership with the PNG Orchids.

Tsaka on behalf of the PNG Rugby League Board and the rugby league family, thanked Peter Botten and the Oil Search Ltd for their support towards women rugby league development in PNG.