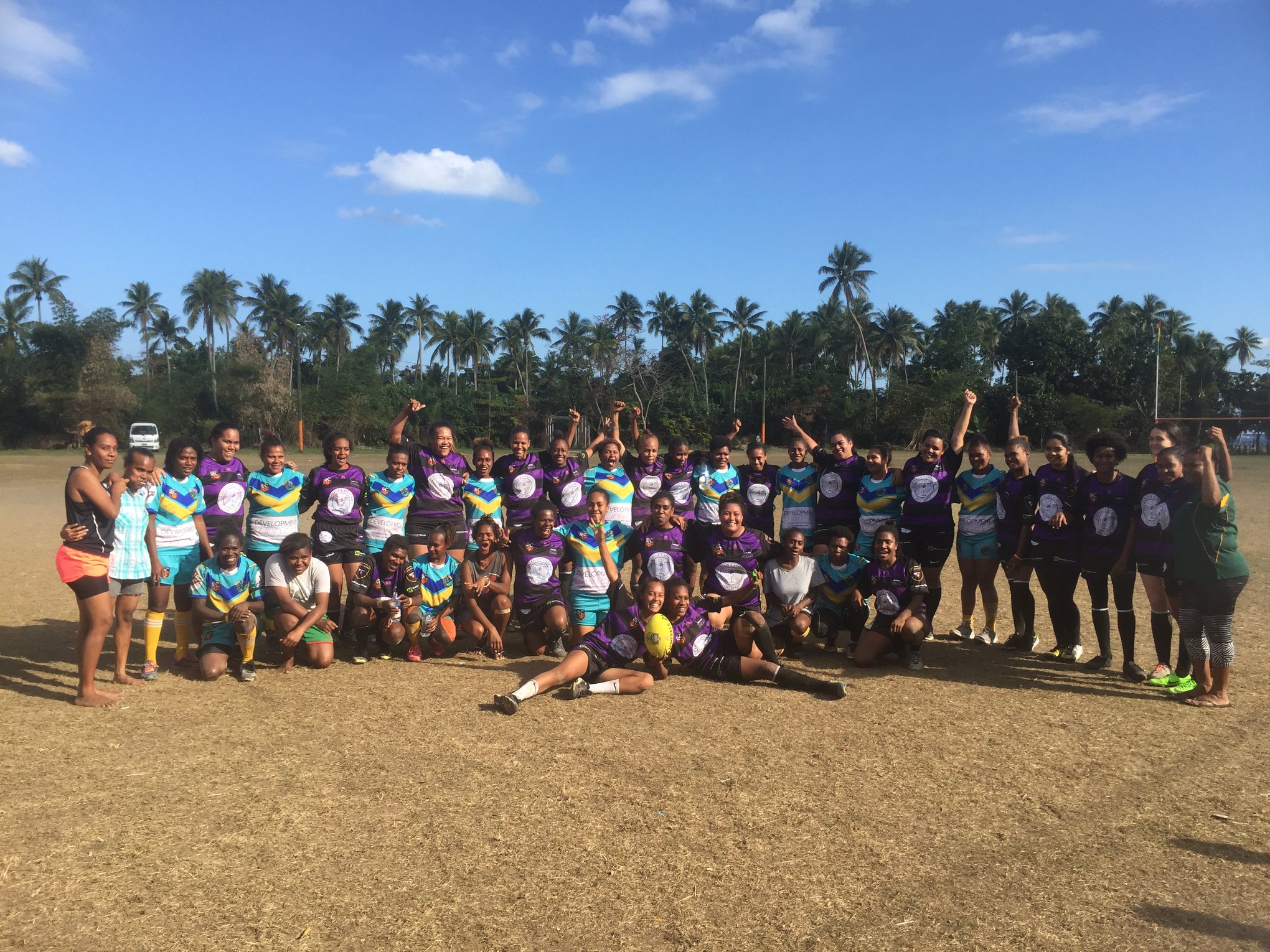 Great skill, athleticism and tough were the words used by Rugby League experts who witnessed the first ever game of Women’s Rugby League in Vanuatu on Saturday 11th August 2018. The standard of play, highlighted by spectacular big hits in front of a healthy and vocal crowd at Mele Field (Port Vila, Vanuatu), was much higher than anyone expected of the first ever game with only 6 weeks preparation and points to a healthy future for Women’s Rugby League in Vanuatu.

Pamela Malapa’s name with forever be remembered as the first women to score a try in an official match in Vanuatu, a great runaway try that was one of many electrifying runs that lit up the boisterous crowd at Mele, home to Vanuatu’s largest village. Pamela’s try just before half-time saw the Mele Eels Women’s Rugby League team lead 4-0 at the break.

Mele looked like they had the match in control when just after half-time when Belinda Chilia added a second try and Mele raced out to an 8-0 lead. Though the Port Vila Powerhouse Women’s Rugby League team had other ideas as they piled on three quick tries to Stephanie Laloyer, Lehina Faurua and the match winner from Elisha Lana William’s to run out 12-8 victors.

Though there were only winners on the day, as echoed by Mele Eels Coach Joshua Mackenzie “It was an amazing effort from all girls involved, highlighted by the quality and the passion both teams played with. Vanuatu now has the foundation to be a real power of the Pacific in regards to women’s sport and the village of Mele is proud to be leading the way and we encourage other villages all over Vanuatu to put together a team and join us in the future.”

Both teams have made a commitment that this is just the start of great things, with players from both sides already looking forward to the next game. The Port Vila Rugby League are using this game as the platform to build a domestic competition heading into 2019. The Vanuatu Rugby League are also looking at forming a National Women’s team as early as 2019, with a number of countries enquiring about matches with Vanuatu.

The day and future is best summed up by one of the drivers of Women’s Rugby League and Port Vila Powerhouse player So’o Motuliki “At the end of the day, it is not about who won the game, it is about groups of women who played the first ever women’s match to pave the way forward for the sport in Vanuatu. Yes, Powerhouse won but what’s a win if the sport does not go further than just one match? The game yesterday for me personally was Port Vila Powerhouse and Mele Eels creating the beginning of Rugby League for women in Vanuatu.”

The Vanuatu Rugby League would like to congratulate both clubs, Port Vila Powerhouse and Mele Eels and all the players for making this game happen. The Vanuatu Rugby League is committed to gender equality and promoting the game at all levels from juniors to seniors, for both females and males. The Vanuatu Rugby League would also like to extend thanks to a number of organisations who came down and supported on the day including the National Bank of Vanuatu, Azure Pure Water, Vanuatu Beverage Limited and the Holiday Inn Resort Vanuatu. Also special mention to coaches Brett Wright and Joshua Mackenzie, all the support staff, sponsors and supporters of both teams.