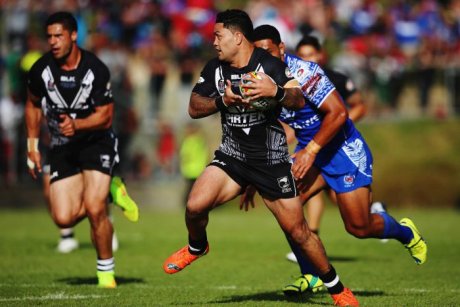 Seven players are in line to make their Test debuts for the New Zealand Kiwis after being named in the 19-man squad for the historic international against England at Mile High Stadium in Denver, Colorado, on Saturday, June 23.

“I’m excited for each of them and for everyone included for the first major rugby league international ever played in the United States,” said Maguire.

“We have a group of players here who have all been in great form so far this season and totally deserve this chance.

“What has really struck home is just how passionate the players have been when talking to them about playing for the Kiwis and about this Test. They’re busting to be involved.

“It’s also hugely exciting on a personal level to not only be involved in coaching again but to have the privilege of doing so with New Zealand.”

Maguire resumes his coaching career after winning grand finals with South Sydney and Wigan as well as guiding Wigan to Challenge Cup success.

“This is our first opportunity to create an expectation towards taking the Kiwi jersey back to the top of international rugby league,” said Maguire.

Of the newcomers, the most experienced is Ah Mau (27), who started his 168-game NRL career with the Vodafone Warriors in 2009. He has tasted international football with 16 Tests for Toa Samoa including last year’s Rugby League World Cup. Maumalo, Ese’ese and Faitala-Mariner have also played at Test level for Samoa while Marsters has represented Cook Islands.

The Kiwis have assembled in Sydney before flying out for Denver tomorrow morning.