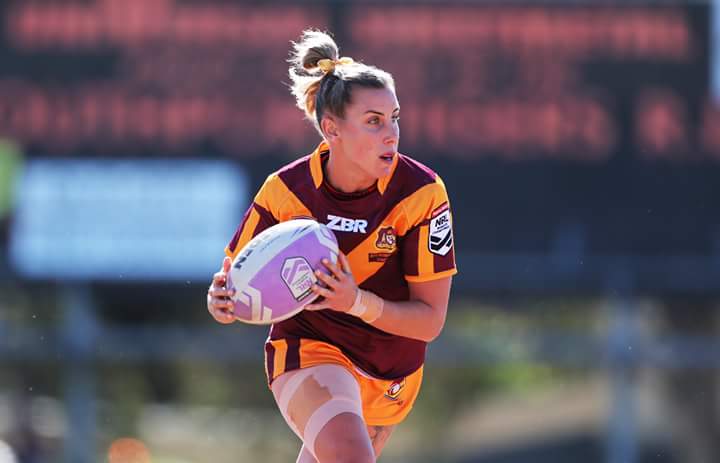 NSW Country have won the Harvey Norman National Championships, storming home with two late tries to snatch a 16-12 victory over arch-rivals NSW City in the final at Owen Park on the Gold Coast on Sunday.

A solo try to City halfback Maddie Studdon in the second half broke an 8-8 deadlock but the Country side rallied to level the scores before Ngalika Barker crashed her way over in the corner with a minute remaining.

Country were forced to field an understrength line-up, a result of having played three matches in as many days.

NSW Origin coach Ben Cross will have concerns over several players leading into the women’s Holden State of Origin on June 22 with Country fullback Nakia Davis Welsh (ankle) leaving the field in the first half.

Kezie Apps withdrew pre-game with an undisclosed injury, believed to be minor, following the star’s workload concerns over the previous two days.

Already without Ruan Sims (arm), the side were also missing Rikeya Horne through concussion.

NSW City drew first blood to cross in the seventh minute with a cut-out pass from Rebecca Riley finding Quincy Dodd out wide for the winger to go over in the corner – her fifth try in three games at the Championships.

Both sides were guilty of errors in the middle of the first half but Country clicked into gear in the 18th minute with skipper Sam Bremner delivering a 20-metre pass to the chest of Shakiah Tungai who strolled over in the corner.

Bremner capped off the victory – and a return from injury – by later being named player of the tournament.

City took seven minutes to respond with Lavina O’Mealey charging her way over from close range to take back the lead 8-4.

That advantage was quickly matched by Country as the see-sawing contest continued before the break with Kyara Nean carrying three defenders over the line to go into the half-time break even before a frantic second half saw Country come out on top.

In the other playoff matches on Sunday, Queensland Country come from behind to beat Queensland City 22-20 in a thriller.

It was a high-quality performance from both Queensland teams after a disappointing campaign.

Maroons coach Jason Hetherington would have been pleased with the response from the women in calculations for Origin after both sides missed the final.

A try to Ali Brigginshaw with eight minutes remaining levelled the scores at 16-16 before a late four-pointer to had City leading by an unconverted try with less than a minute remaining.

A short kick-off from Country turned successful and the ball was sent through several sets of hands out wide to Kodi House who dived over in the corner.

Chelsea Baker nailed the sideline conversion after the siren to steal a 22-20 win.

Meanwhile, the Australian Defence Force recorded their first win of the tournament with a 12-4 victory over the Combined Affiliated States side in the playoff for fifth position.