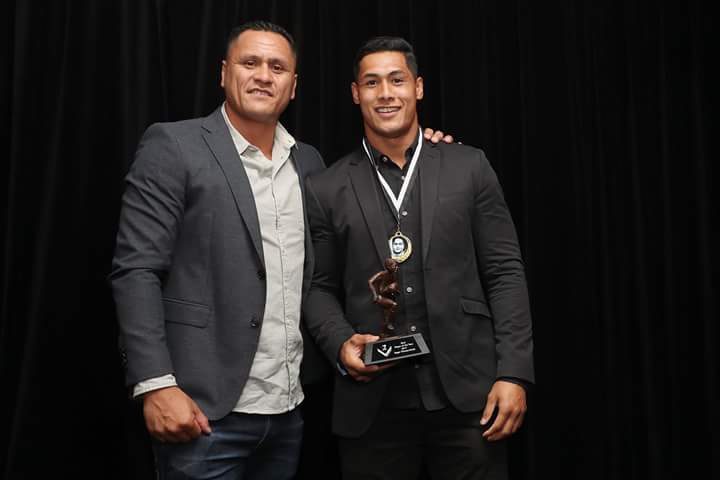 The dynamic full-back ended the 2017 World Cup with the equal most tries scored (3), the most carries (72) and the most metres carried (626) for the Kiwis. Head Coach David Kidwell says such achievements were no small feat considering Tuivasa-Sheck had recently returned from a serious knee injury.

“In some cases, it takes a fair amount of time for a player to get back to fine form following such a serious injury, but Roger did everything right and ultimately showed great leadership at the back.

“He’s a quality young-man who was a pleasure to coach and I congratulate him for his impressive performances throughout the NRL season and at the 2017 Rugby League World Cup,” Kidwell said.

While top honours in the men’s category went to Tuivasa-Sheck, Women’s Player of the Year was picked up by his female fullback counterpart, Apii Nicholls-Pualau.

After an outstanding season with the seven time National title winning Counties Manukau Stingrays, Nicholls-Pualau was selected to fill the void of previous Kiwi Ferns captain and fullback, Sarina Fiso, who won 2016 Women’s Player of the Year. Being named Back of the Tournament at the National Women’s Tournament was yet another feather in her cap.

Apii took ownership of the number one jersey stamping her mark as the starting Kiwi Ferns fullback for the entirety of the 2017 Rugby League World Cup. She also topped the leader board for kick return metres at the World Cup racking up a massive 279 metres, but Nicholls-Pualau was quick to downplay her accomplishments.

“I’m honoured to even be considered alongside players such as Teuila Fotu-Moala and Krystal Rota, let alone to win this award.

“There are a lot of people I have to thank for their on-going support including my incredible family – without them there is no way I could have dedicated as much time as I did to the sport I love,” she said.

Kiwis Rookie of the Year was won by Nelson Asofa-Solomona (Kiwi #804) who was also a finalist in the top category after bursting onto the international rugby league scene in 2017.

His physicality turned heads at the Rugby League World Cup causing defensive issues for his opposition and World Cup rankings showed he was only second to Roger Tuivasa-Sheck when it came to most carries (56) and metres carried (489).

Winners of all 12 NZRL Awards categories can be found below: