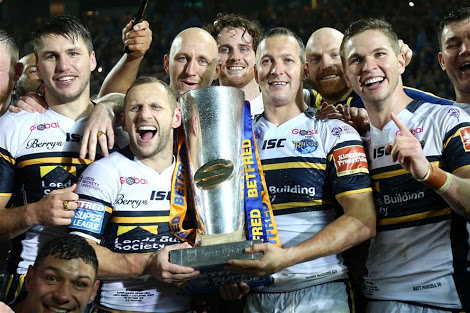 The World Club Challenge has received a major boost with Downer Group joining as the naming rights partner for the marquee event.

The landmark game will see rugby league’s two premier teams battle it out for the right to be crowned World Champion.

Today’s announcement sees Downer continue their proud connection to rugby league on the back of their two-year association with the Auckland Nines.

The Chief Executive Officer of Downer, Grant Fenn, said Downer was thrilled to be supporting a game that would determine which rugby league team was the best in the world.

“Melbourne Storm and Leeds Rhinos have both enjoyed great success over a number of years and this will be an outstanding game of footy.

With the game to be shown live on Channel Nine and around the world, the Downer World Club Challenge will once again see Melbourne front and centre on the global stage.

Storm CEO Dave Donaghy said the Club was delighted to have Downer on board as a major partner for the marquee event.

“It is fantastic to welcome Downer back to rugby league as the naming rights partner of the Downer World Club Challenge.

“Melbourne Storm is excited to not only play in a game of this significance but also host such a major event in our great city.

“With a trophy up for grabs on a Friday night in Melbourne, we have no doubt all Storm fans and sport lovers will come along to Downer World Club Challenge and showcase why we truly are the sporting capital of the world.”