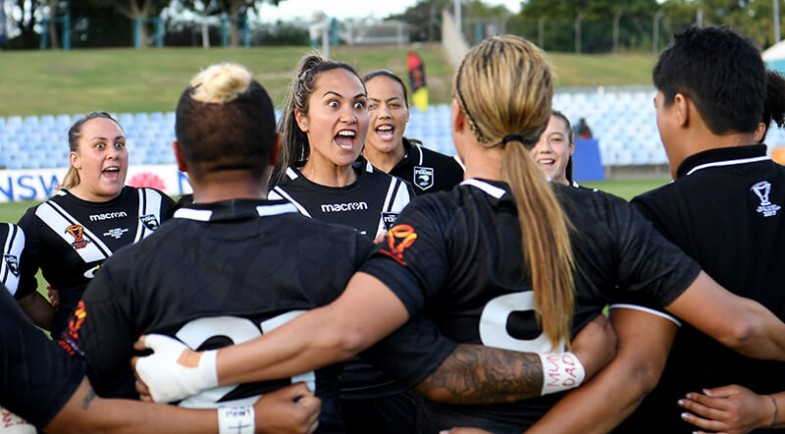 New Zealand has put together a seven-try blitz in the second-half to record a dominant 38-0 victory over Papua New Guinea while keeping their opposition scoreless for the second week in a row.

Despite the Ferns crossing for two tries in the opening ten minutes, the Orchids were able to hold out an array of attacking raids to keep the score to just 8-0 at half-time.

Their efforts were to no avail, however, as the Ferns put together a clinical second stanza with Annetta Nuuausala and Maitua Feterika inspiring the hard-fought win.

Luisa Gago gave New Zealand the early buffer as she zig-zagged her way through multiple Orchids defenders to sneak her way over the try-line.

It wasn’t long before they extended their lead after fullback Raecene McGregor crashed her way over for their second unanswered try.

Papua New Guinea showed their resilience with some committed goal-line defence holding out a third Ferns try, but their success didn’t resonate with the ball-in-hand with New Zealand holding them out at the opposing end.

Both teams were fighting valiantly in a third-hitting contest that saw some brutally absorbing tackles on either side of the ball, and New Zealand looked to have finally made a breakthrough with Maitua Feterika slicing through but eventually knocked the ball forward just metres out from the try line.

Just moments later, a scorching kick at the opposing end from PNG halfback Amelia Kuk ricocheted off the post and planted down by the scrambling Orchids attackers, but the video referee ruled there was a knock-on in the process of scoring.

As their only chance went begging, they were able to maintain the 8-point deficit at half-time despite conceding two tries in the opening ten minutes of play.

The Ferns began the first-half with some great lead-up play from McGregor and Georgia Hale as they broke the line to earn their side great field position, but the scrambling PNG defence was able to hold out the raid.

New Zealand thought they had grabbed their much-needed just a few tackles later after a classy backline movement saw Feterika crash over in the right-hand corner, but some desperate defence from Male Mar stripped the ball in the process of scoring.

Despite their gallant efforts, they couldn’t stop winger Hilda Peters scoring in the opposite corner after a swift right-to-left shift.

Ngatokotoru Arakua was unable to convert from the sideline as the Ferns held onto a handy 12-0 lead.

With a wave of momentum behind them, the Ferns were able to strike shortly after with centre Amber Kani crossing the line before Fetrika scored their fifth unanswered try in similar fashion just two minutes later.

Although conceding three tries within a relentless 15 minute period, PNG clawed their way back with Joan Kuman going close to scoring but was forced into touch by the gutsy Ferns defence.

Their defensive efforts were rewarded with a four-pointer at the opposite end after some barnstorming runs through the middle-third gave them valuable field position, before going through the hands to give Atawhai Tupaea open space and give them a 26-point lead with just over 20 minutes remaining.

Anderson was unable to convert her own try as the Ferns ran away with a comfortable 30-0 lead with 15 minutes remaining in the contest.

Annetta Nuuausala and Amber Kani put the icing on the cake in the closing stages with tries of their own to finish off a 38-0 win.