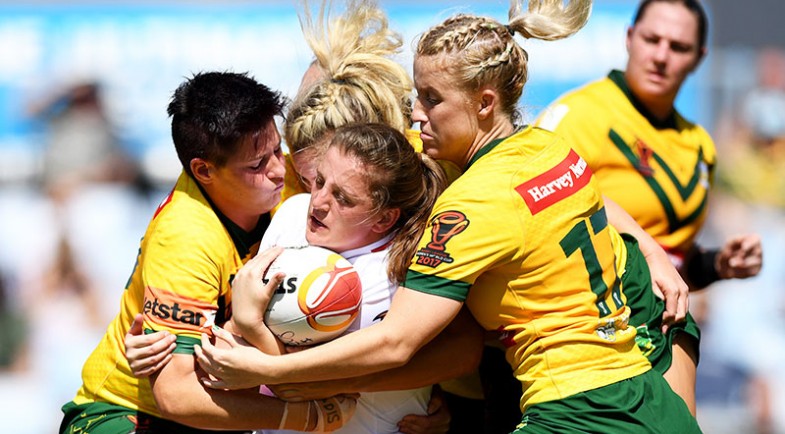 Jillaroos too strong for Lionesses

The Jillaroos secured their second victory of the World Cup with a commanding 38-0 thumping of England.
Ali Brigginshaw controlled the game beautifully for her side, having a hand in a majority of the points scored while also commanding field position with her wonderful kicking game.

England began the match on the front foot, but the Jillaroos brought the same attitude to their goal-line defence as they did three days ago and held out everything what was thrown at them.

A kick was put up on the fifth tackle but Isabelle Kelly positioned herself perfectly to take the catch and run 40 metres to get her side out of trouble. Kelly finished the job a few tackles later by barnstorming her way over the try-line in the left corner to open the Jillaroos’ account.

The next points also began in the Australian half, but no further tackles were required as Meg Ward found some open space and managed to throw a perfect offload to a supporting Brigginshaw, who then gave it off to the flying fullback Nakia-Davis Welsh who fended off a chaser to score under the posts.

Kelly and Ward were in the thick of the action once again as the former continued a nice right-to-left shift whilst onto the attack for her winger to score her first of the afternoon and increase their lead to 14-0.

When things are going your way, so does the bounce of the ball, and after Brigginshaw put in a deep kick, an obscure bounce allowed her to toe it through for Chelsea Baker to pick it up – after she and Davis-Welsh were ran onside – and score.

Kelly was brought down after a strong run while on the attack, but the defence was fractured as a result and Elianna Walton saw an opportunity to crash over for the Jillaroos fifth try of the afternoon.

The half finished with England on the attack after Kelly was put on report for a biting allegation, but they still could not crack the Jillaroos defence.

Australia began the second half in style after various players combined up the middle to make a 30-metre surge, and Brigginshaw took advantage of the backtracking defence as she passed to Kezie Apps who was never going to be beaten one on one.

England put pressure on the Australians for the next period of the match, but as they have for their entire campaign held strong defensively and let nobody through.

Moran stepped up to the plate on the hour mark with her trademark right foot step to burn through England, before another line-break by Kelly led to a simple try from dummy half by Ward on the ensuing play to bag her second.

Australia head into the third round of the group stages with an aggregate score-line of 96-4.