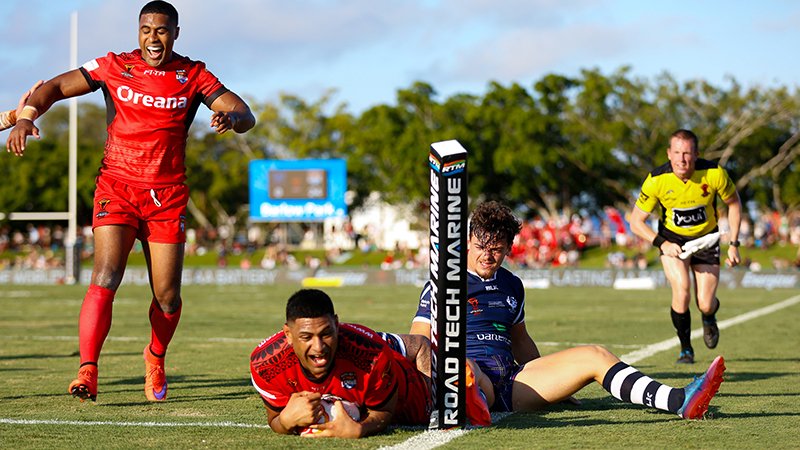 Kristian Woolf has long wondered how his Tongan team would fare on the world stage if all eligible players were present; in 40 minutes on a sweltering Sunday in Cairns he may have got his answer.

The team that was the talk of the World Cup prior to the tournament kicked off due to the high-profile inclusions of Jason Taumalolo and Andrew Fifita wasted no time to show that what is on paper will transfer to the field, Michael Jennings scoring the opening four-pointer of his first half hat-trick inside the first three minutes.

With Taumalolo running riot Tonga scored seven tries in the first 40 minutes and went within an Ata Hingano conversion of keeping pace with the clock, leading 38-0 at half-time.

No team has ever scored 38 points in the first half of an international and come out in the second term and played better but the fact that his side fumbled their way to a 12-4 second half and 50-4 win will give Woolf handy ammunition for the preparation of bigger games to come.

Next Saturday’s clash with Samoa in Hamilton will be critical in determining how the finals layout looks for each team that progresses but former New South Wales coach Laurie Daley saw enough in a team boasting 11 former Kiwi or Kangaroo reps to suggest Tonga could qualify for the final in Brisbane and trouble whichever team they happen to meet there.

“I really think Tonga are capable of getting there and on their day they can cause an upset,” Daley said.

Scotland’s resistance actually got stronger as the game went on and they objected strongly to a late hit by Ben Murdoch-Masila midway through the second half, sparking a mid-field melee that saw the majority of players from both sides rush to get involved.

Scotland’s best attacking opportunities came in the first five minutes of the second half but they twice made basic errors inside Tonga’s 20-metre zone and only some desperate defence from Scottish standout Lewis Tierney stopped Terepo scoring his second try in the 47th minute.

Danny Brough’s left boot finally earned his side their first repeat set of the game in the 62nd minute and they were rewarded for their courage with a burrowing try from dummy-half to halfback Danny Addy three tackles later.

It took Tonga until the 73rd minute to add to their first-half tally and it came in fortunate fashion against the run of play, Tupou stealing an intercept and racing 70 metres to score under the posts on the back of an awful two minutes by Fifita where he lost possession and gave away two penalties, all sparked by a great hit by Scottish lock James Bell.

Taumalolo returned to the contest with five minutes to go and seemed to inject instant energy into his teammates, Murdoch-Masila busting his way through the Scots to set up Ata Hingano for a try three minutes from full-time.

The addition of Taumalolo prior to the tournament gave Tonga instant credibility but it also gave them a platform up front that goes some way to negating any doubts around their young halves in Hingano and Tui Lolohea.

Tonga were forced to do without Hingano for a large part of the first half due to a nasty cut in his mouth but it never stalled their momentum as the likes of Taumalolo, Fifita, Sio Siua Taukeiaho, Sika Manu and Manu Ma’u rolled forward with wave after wave of unrelenting force.

With the likes of Joe Ofahengaue and Tevita Pangai Jnr watching on from the sidelines, Taumalolo was replaced after 50 minutes with the man who replaced him, Murdoch-Masila, held up under the posts a couple of minutes later.

Having scored three tries for Tonga in the 2008 World Cup, Jennings doubled his tally in the first half alone to take the mantle of Tonga’s greatest World Cup try-scorer with Taumalolo forcing his way over, Daniel Tupou crossing out on the left flank and Sika Manu and Peni Terepo exposing some flimsy Scottish defence on the right edge in a devastating opening 40 minutes.