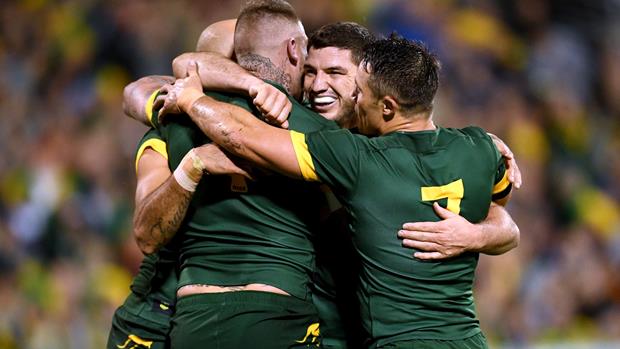 Australia have named three debutants for Friday night’s World Cup opener against England in Melbourne, while Michael Morgan has won the race for the No.6 jersey.

Kangaroos coach Mal Meninga has made six changes to the team that thrashed New Zealand 30-12 in their most recent outing in May at Canberra.

South Sydney-bound back Dane Gagai, Storm premiership winner Jordan McLean and Sharks enforcer Wade Graham will be handed their maiden Kangaroos jerseys for the clash against Wayne Bennett’s side at AAMI Park.

Gagai, who got the nod ahead of Manly’s Tom Trbojevic and Penrith’s Josh Mansour, was rewarded for a stellar State of Origin campaign in which he won the player of the series award.

McLean, who will join the Cowboys after this year’s World Cup, edged out Penrith’s Reagan Campbell-Gillard for one of the bench front-rower positions.

Graham earned a spot on the bench because of his versatility and Meninga also opted for the Sharks forward’s size over Dragons-bound playmaker Ben Hunt as the team’s utility.

The most contentious position heading into the opener was who would partner Cooper Cronk in the halves with Johnathan Thurston unavailable through injury.

Morgan’s sublime form at the Cowboys in the finals lifted him ahead of Melbourne’s Cameron Munster and Cronulla’s James Maloney.

“All of my games bar one for Australia have been off the bench in a different role,” Morgan said just before the official team announcement on Tuesday.

“So it’s where I prefer to play, so look I’d feel comfortable if given the opportunity. I’m under no illusions there’s plenty of competition. Just to be in the side, I’ll be happy with.

“I think more can come into it at times, whether it’s combinations of things like that, or who’s more suited to the team we’re playing against.”

Billy Slater will end a three-and-a-half-year Test drought when he returns to the Kangaroos team for the first time since the 2014 Anzac Test.

Valentine Holmes, Josh Dugan and Will Chambers have retained their positions in the back line from the team that caned the Kiwis.

Close friends Aaron Woods and David Klemmer will start up front for the Kangaroos, while Matt Gillett and Boyd Cordner will play on the edge as expected.

Jake Trbojevic beat Josh McGuire to the No.13 jersey, while Cameron Smith will lead the side at hooker in his 51st Test for the Kangaroos.

The Kangaroos had to name a 21-man squad on Tuesday but it will be reduced to 17 an hour before kick-off.