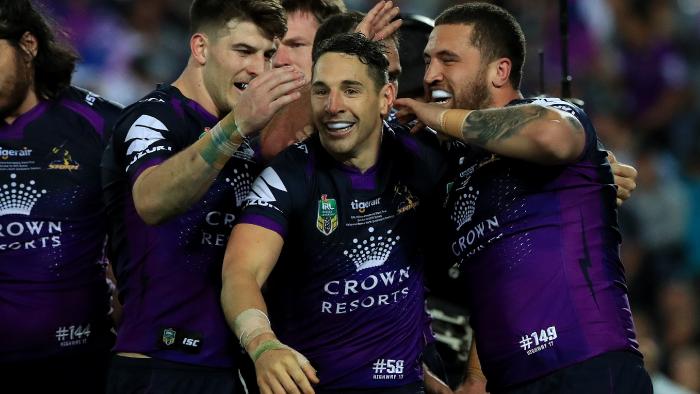 Storm too strong for Cowboys in decider

A formidable performance from one of the most dominant club sides of the NRL era has culminated in a deserved 34-6 Grand Final win for Melbourne on the back of starring roles from big-game players Cameron Smith, Billy Slater and Cooper Cronk.

The North Queensland Cowboys battled bravely right to the end were barely in the contest right from the outset against a Storm side that were clinical and relentless from the opening whistle in Cronk’s final game in purple.

It is fitting that the final club game from that trio saw all three bring their best to the game’s biggest stage, scoring or helping create four tries. They got plenty of assistance from their dominant forward pack and some moment of brilliance from exciting young stars like Josh Addo-Carr.

The score-line reflected the sheer dominance of Melbourne’s performances right from Round 1 this year but did not fairly reflect the effort the Cowboys put into a contest.

The match started in horrific fashion for the Cowboys with play held up for several minutes while prop Shaun Fensom received medical attention and was taken from the field after just four minutes.

Attempting to stop a charging Jesse Bromwich along with teammate Ethan Lowe, the latter landed awkwardly on Fensom’s ankle. He immediately signalled for the trainer and there was a delay of several minutes while Fensom was administered pain relief and loaded onto a medicab.

While North Queensland managed to weather the storm for the opening 20 minutes the favourites started to flex their muscle from midway through the half.

First Will Chambers received a Cowboys bat-back from an attacking bomb near Melbourne’s end and offloaded to a breakaway Josh Addo-Carr who streaked 70 metres to open the scoring.

After a few more sets of dominant and a Smith grubber for a repeat set, Melbourne extended their lead when Felise Kaufusi carved past Te Maire Martin off a nice Billy Slater pass in the 28th minute.

When Antonio Winterstein charged onto a Cooper Cronk attacking grubber and fumbled it at his own line it set the stage for yet another Storm assault and this time Slater went himself, slicing through an increasingly brittle-looking Cowboys left edge defence to make it 18-0 at the break.

The Cowboys desperately needed to be first to score in the second half against the competition’s best front-runners and they got some help from the Storm, who handed over five straight penalties through offside and ruck infringements to camp the Cowboys in attacking range and allow Te Maire Martin to slice through.

That was as good as it got for the Cowboys though as an unstoppable Storm outfit exploded late in similar fashion to that in which they put Brisbane to the sword a week earlier.

Bega-born lock Dale Finucane exploded onto a Smith flat ball at the line to burst over in the 64th minute; a simple error from Kane Linnett coughed the ball up to Josh Addo-Carr who offloaded to an unmarked Curtis Scott three minutes later. Addo-Carr bagged his double in the 73rd minute after some lovely lead-up work from Cronk and Slater before a beautiful long-cut-out from Tohu Harris to seal the dominant 34-6 result.