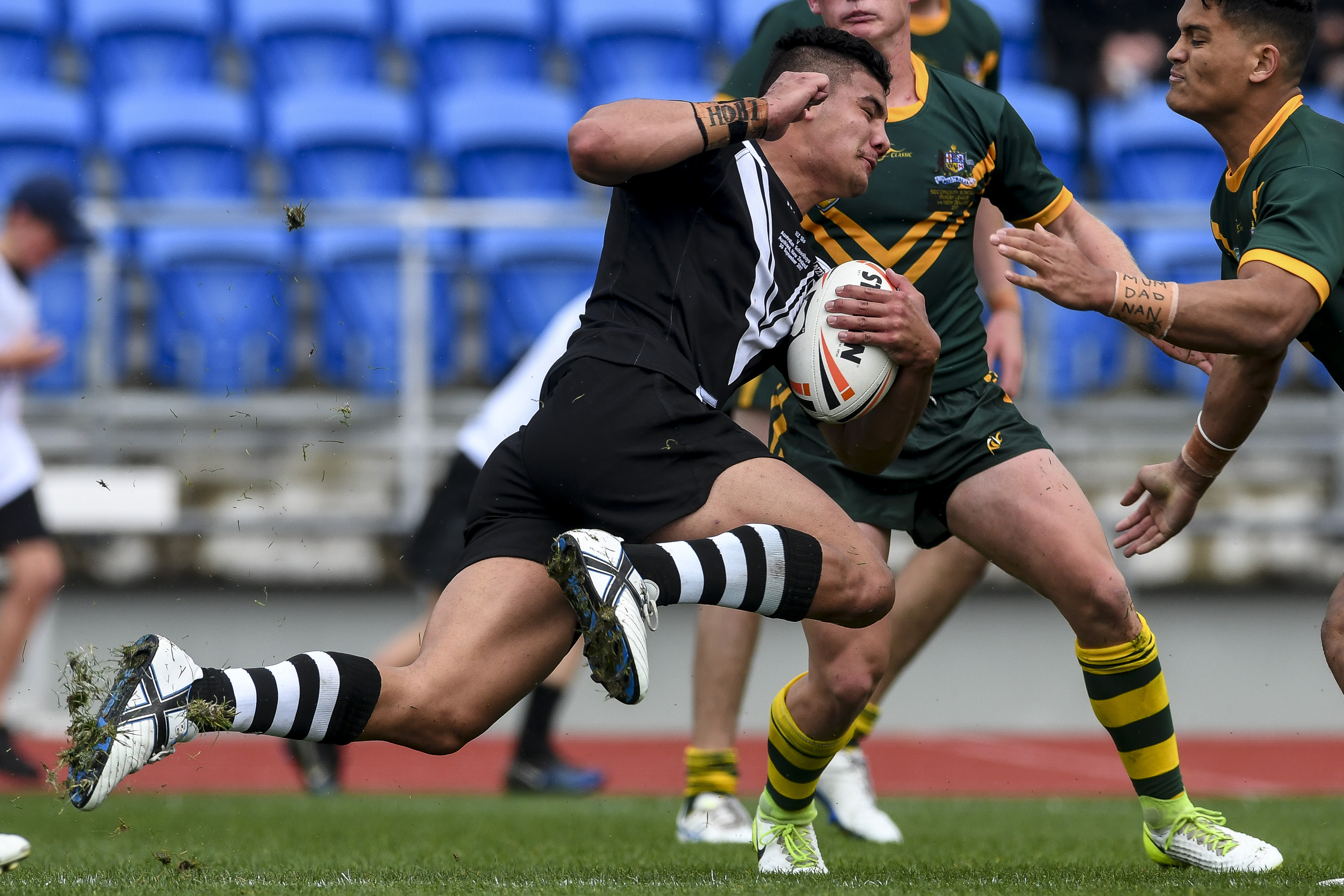 The New Zealand 18s were out-classed by a slick Australian Schoolboys side, 40-8, in their match-up at Trust Arena in Auckland this afternoon.

In a game that promised to be a physical one, the boys from across the ditch snatched their second victory of the week, but this time, blew the scoreboard wide open.

Auckland’s wet conditions came to the party bringing countless knock-ons to both sides and handling errors that made for a slow start.
It was looking like the New Zealand 18s would score 20 minutes into their encounter after a knock-on from an under pressure Australian team, but the over-eager New Zealanders came up short inches from the try-line.

The sheer speed of the visitors’ play the balls had them gaining 40 metres with a tackle count of only three, and it was that quick pace which brought in the Australian second-rower, David Fafita, for his first try of the match. The score would remain at 10-0 – Zac Lomax’ first and only missed conversion of their two-match campaign.

Just as halftime was looming, the NZ 18s scored their first try with winger, Mawene Hiroti, crossing the line on the right wing – the NZ 18s go into the changing rooms trailing by 10-4.

Refreshed and ready for another 40 minutes, the New Zealanders came out firing. Their second try came when they capitalised on their opposition’s dropped ball with captain, Dylan Tavita, scoring just right of the post.
However, the captain didn’t manage to convert his own try falling short of levelling the scoreboard – 10-8.

The New Zealand 18s may have closed the gap, but give the Australians an inch and they’ll take a mile. That’s exactly what they did as Tanah Boyd went in for his second try of the game which was then converted by Zac Lomax extending their lead to 16-8. Boyd would go on to earn himself MVP of the Australian Schoolboys side.

Then came David Fafita’s second try. NZ found themselves struggling to read the play as Fafita received a fantastic cut from Boyd slipping through an absent defense taking the score to 22-8 after another successful Lomax conversion.
Australia’s next try went much the same way set up by an outstanding grubber from the classy, Tanah Boyd which was taken across the line by Jesse Cronin. Lomax converting the try to make it 28-8.

As the New Zealand missed tackle count increased, the Australians took full advantage with a further three more tries on the board, all successfully converted by Zac Lomax.

Rewarded for their never-ending forward momentum, the Australian Schoolboys took home an impressive win with seven tries to two and a score of 40-8. Australian co-captains, Zac Lomax and Campbell Graham, credited their successful camp for their victory.

“We’ve had a really good camp with incredible coaching staff which put us in an ideal place,”
“It was a tough game, their line speed was fast and aggressive but all credit to our boys – we got the job done,” they said.

New Zealand 18s captain, Dylan Tavita, said “it was a great arm wrestle in the first 40 minutes but in the second half, fatigue really got to us and we lacked discipline.”