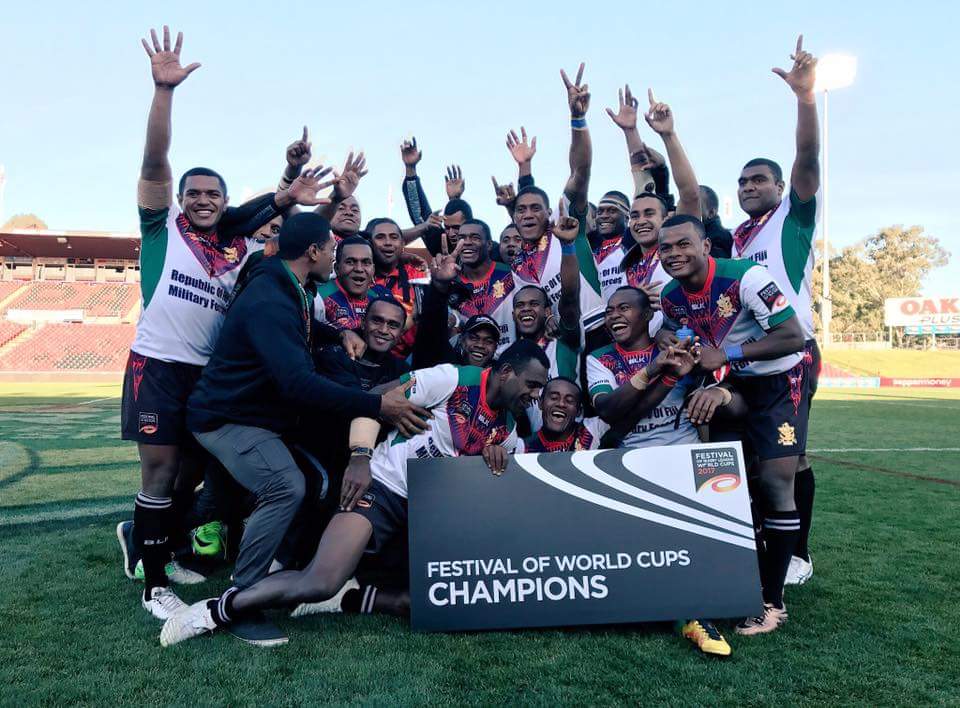 Fiji have claimed their first ever Defence Forces World Cup title after a commanding 44-12 victory at Pepper Stadium on Sunday afternoon.
Continuous handling errors from Australia saw them behind at the break with a 22-6 scoreline at half-time thanks to four unanswered try in the opening 40 minutes, and their attacking prowess couldn’t be halted in the final term as they recorded a comfortable win over a disappointing Australian outfit.

Halfback Ilikena Niumataiwalu and fullback Aaron Joshua Vadiga were instrumental in Fiji’s win, while Barry Ruttley and Mitch Knowles proved valiant in a losing side.

A knock-on from Australia in their very first set invited Fiji straight onto the attack to claim first points of the afternoon, with Jone Saukuru bursting through some flimsy defence but the referee to ruling final pass forward.

Australia were struggling to force their way out of their own-end with the committed Fijian defence causing an array of drop ball, but a brilliant 40/20 from Mitch Knowles proved to be the momentum swinger with winger Sam Lutzke eventually reaping the rewards as he crossed for his team’s first try of the afternoon.

Luke Cuant continued their strong start with a powerful run up the middle-third seeing him burst through the Fijian defensive line, but his team were unable to capitalise on his hard work with a forward pass just a few tackles later.

Fiji were looking for a quick response with some charging runs of their own giving them valuable field position, but another forward pass ruined their chances of a maiden try despite looking incredibly threatening early in the contest.

With all their missed opportunities, Fiji’s perseverance soon paid off as they took advantage of another handling error from Australia with fullback Aaron Joshua Vadiga showing great speed to slice through the defence and score his first try of the contest.

With both teams looking dangerous throughout the opening 20 minutes, continuous handling errors would ruin their chances of a breakthrough try with front-row Jack Watson almost crossing for a well-deserved four-pointer, only to knock the ball on in the process of scoring.

Just moments later, a scorching bomb from Fiji couldn’t be defused from Australia’s back three and eventually landed in the arms of Vadiga, with the dynamic fullback soon offloading to Ainisito Komai to score back-to-back tries.

Ilikena Niumataiwalu converted to take a 12-6 lead with 15 minutes remaining in the first half.

Constant errors from Australia applied a heap of pressure on their goal-line defence, and Fiji soon extended their lead as Lepani Tacikalou barged his way over in the left-hand corner.

Brimming with confidence, Fiji made sure they would finished the first half the same way they started with Niumataiwalu re-gathering a crafty grubber before finding Vadiga to score his second try of the game.

Niumataiwalu converted once again to set a surprising 22-6 lead at half-time.

With a mountain of work to do in the hopes of claiming back-to-back tournament victories, an early error from Fiji saw Australia straight onto the attack, but were unable to take advantage with the pressure from Fiji’s defence forcing another error.

On the back of some brutal defensive efforts, Fiji found themselves on the scoresheet once again with Tacikalou streaking down the left-hand touchline before ignoring his inside support with a sneaky grubber behind Rattley and re-gathering to score his second try of the game.

There seemed be no stopping Fiji as they continued their dominance throughout the early exchanges of the second-half, with Marika Tagicakibau showing blinding speed to pounce on a loose ball from a crafty kick into the in-goal for their sixth unanswered try.

Australia were looking to salvage some pride despite trailing by 26 points after 55 minutes, and an early shift saw Lutzke find some open space before drawing the fullback for Dylan McGregor who found his way over for their second try.

Mcgregor’s try seemed to spark some life into Australia with some new-found direction and go-forward steering them into enemy territory, but Fiji wreathed the storm soon enough with their brick-wall defence unable to be broken.

Jay Brookfield continued to fight hard for his struggling side as he shrugged off a host of defenders to sprint down the sideline, but the scrambling Fijian defence proved too strong as they soon forced the ball free.

The game was all but over with just under 10 minutes remaining, but Fiji ensured they would finish their commanding performance in perfect style as Saukuru capped off a brilliant individual display as he crashed over for well-deserved try.

Despite Australia pressing for another consolation try, Fiji’s strong defensive efforts continued right until the final whistle and was rewarded with a final try to Rotate Tobe sealing an incredible 44-12 victory to win the Defence Forces World Cup for 2017.