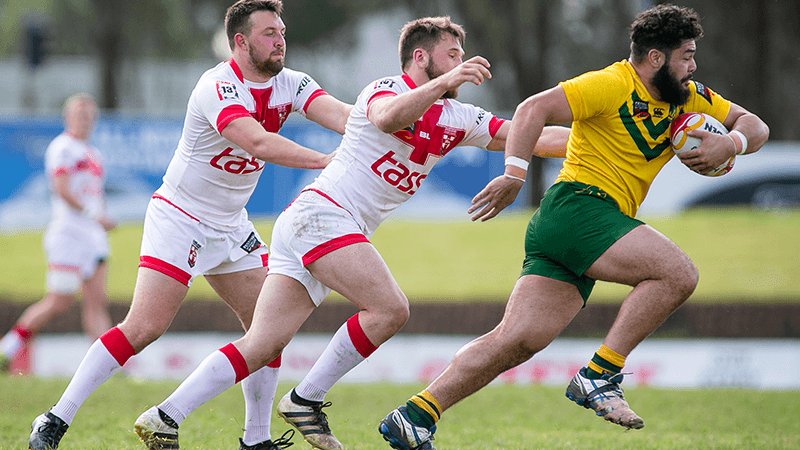 With star winger Jamie Anderson scoring a hat trick of tries, the Australians took their chances in key moments to qualify for Sunday’s decider in a match that was a lot closer than the final scores indicated.

After the English held the early advantage on the back of some early penalties without a result, Australia constructed a neat attack down the right side in the 10th minute for Jamie Anderson to score the opening try.

After being hit in a high tackle by English fullback Jacob Morgan when scoring the try, referee Ethan Mitcham ruled a penalty after awarding Anderson the four-pointer to give the Australians a possible eight point try.

Mick O’Keefe missed the conversion, but landed the penalty from in front of the posts to give the Australians a 6-nil lead.

After Australian centre Mick Pearsall was penalised for being in front of the kicker when crossing to score a try in the 18th minute, England worked play upfield from the penalty to send play down the right side for five-eighth James Woodburn-Hall to score in the corner.

Ben Stead converted from touch to level scores at 6-all.

In a tight and tough first half, England earned a penalty in the 28th minute for a flop tackle against Australian forward Harry Pondekas. However, Stead hooked the 30 metre penalty attempt out to the right.

After regaining possession, Australia worked play into position for fullback Jarrod Lee to send Jack Peoples away to score under the posts for a 12-6 lead with O’Keefe’s conversion.

Then just three minutes from half time on the back of a repeat set from a goal line drop out, the Australians worked play down the short right side for Mick Pearsall to score wide out for a 16-6 Australian lead.

Then almost on the stroke of half time, a Giovanni Rapana break up the middle was finished off by Anderson to streak away for his second try under the posts. O’Keefe converted to give Australia a handy 22-6 lead at the break.

England came out with more purpose to start the second half and established great field position for interchange hooker Lewis Lord to burrow over out of acting half from close range and bring scores back to 22-12 after Stead added the extras.

However, an English turnover in possession allowed Australia to set up for Pondekas to burst over wied out on the right to score. O’Keefe converted to extend the lead to 28-12.

England’s main opportunity to launch a comeback was lost when bench forward James Mason lost the ball over the goal line with a try on in the 59th minute.

The Australians made the English pay when on their next set, a loose pass was swooped upon by speedy winger David Sheridan who bolted 55 metres to score the back breaking try. O’Keefe converted to put the Australians out of sight at 34-12.

The English never gave up trying and after a cross field kick was dropped by winger Brad Kislingbury with 12 minutes left, they were rewarded for their endeavour when Lord got out of acting half on their nex attacking set to send centre Jason Bass on a determined 60 metre burst to score.

Stead converted to bring the score back to 34-18.

However, the Australians were not finished yet.

First, Lee finished off a sweeping attack under the posts with seven minutes to play, before Anderson fielded a right sided cross field kick to complete his hat trick. O’Keefe converted both tries to complete the 46-18 triumph.