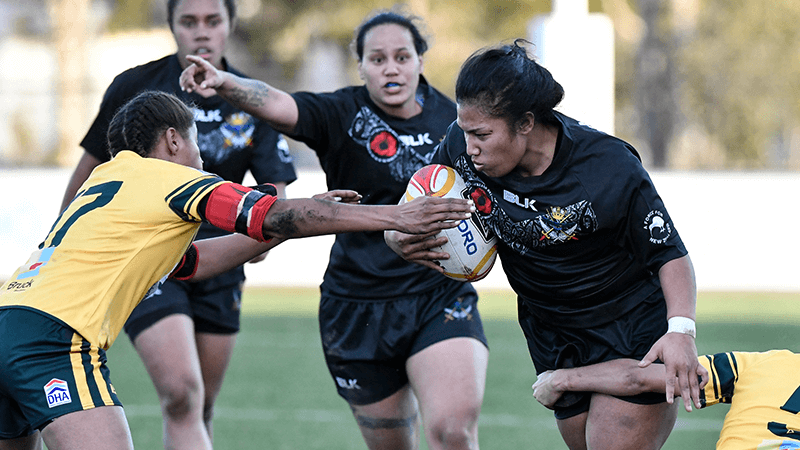 The Australians overcame an improved New Zealand performance that saw the Kiwis lead 22-20 at half time before being too strong in the second half.

Classy half Nicole Hall got the Australians off to the best possible start in the second minute when she burst over to score from the scrum base. Hall converted her own try for a 6-nil lead.

New Zealand got their reply immediately after an Australian dropped ball from the restart. Kiwi five eighth Ruci Malanicagi darted over from close range to lock up the scores at 6-all after she converted her own try.

From a Kiwi dropped ball following the restart, Hall completed a double when she picked up a loose ball through the hands from behind the ruck to score for a 14-6 Australian lead.

The try for try nature of the match then was established when New Zealand backrower Rikki-Lee Rawleigh charged through three defenders from close range to score on the back of an Australian turnover in the 18th minute. Samantha McIntosh converted to cut the Australian lead to 14-12.

After Hall made a long 50 metre break down the right flank in the 25th minute, five eighth Shannon Evans stepped through the backpedalling defence to score her first try. Hall converted for a 20-12 Australian lead.

New Zealand then worked play forward with seven minutes left in the first half for Anita Berry to send Katie Steele over to score in the corner, before a well placed cross kick by Malanilagi on the stroke of half time was fielded by Ruth Tietie before the Australian cover defence arrived to score. McIntosh converted to give New Zealand a 22-20 half time lead.

The Kiwis then set themselves for the upset when they executed a three player overlap on the right five minutes into the second half for backrower Moana Hira to score and extend their lead to 26-20.

With interchange prop Bree-Anne Cheatham then matching the powerful New Zealand pack up front, the Australians then worked their way on top as the second half wore on.

Julie Murchie got her first try running off a Vika Pinomi pass to level scores in the 55th minute after Hall converted – although the try came with a bitter postscript when Australian second rower was sin binned by New Zealand referee Nathan Barker-Pringle for dissent.

Being reduced to 12 players did not stop the Australians when Evans picked up the ball from a New Zealand turnover and dashed 50 metres to score her second try.

Cheatham then capped a fine game when she crashed over from close range in the 65th minute to score. Hall’s conversion extended the Australian lead to 36-26.

Evans then burst through three defenders from close range to complete her hat trick with 12 minutes left.

Murchie then duly completed her hat trick against a tiring Kiwi defence with her second and third tries in the 74th and 78th minutes to close out the 48-26 result – and a second straight Australian win over New Zealand for the week.