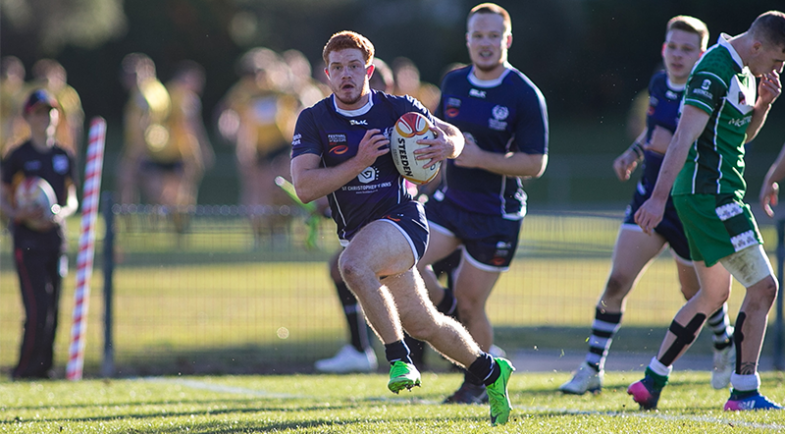 The Scotland Universities Rugby League Team are the first team to qualify for the Semi-Finals of the Universities World Cup with an entertaining 38-24 win over an improved Ireland Universites outfit at Sydney’s New Era Stadium on Sunday afternoon.

The Scots made the most of their chances throughout the match to remain unbeaten after two games in the tournament.

After Scottish centre Scott Plumridge and Irish winger Matt Connolly could not make the most of dropped early scoring opportunites, the Irish were rewarded for starting brightly in attack when fullback Eathon Maloney broke free down the left in the eighth minute to score the opening try. Peter O’Neill converted to give Ireland a 6-nil lead.

The Scots were then able to work field position when they got some football to execute a right side switch for Plumridge to score their first try wide out in the 15th minute and reduce the deficit to 6-4.

On the back of a penalty five minutes later, a switch to the left side flank saw opposite centre Mike Dowding dash away unmarked for Scotland’s second try and an 8-6 lead.

Another Irish turnover 10 minutes from half time gave Scotland further field position for giant forward Dan Turland to lay on a nice pass for Luke Westman to burst over near the posts. Callum Smithson’s conversion gave Scotland a 14-6 lead.

Five minutes from half time, a Scottish turnover followed by penalty from New Zealand referee Nathan Barker-Pringle for being offside at a goal line drop out allowed Ireland an opportunity – which skipper Connor Phillips duly accepted when he strolled over untouched from dummy half near the posts from the penalty. O’Neill’s conversion gave Scotland a 14-12 lead at the interval.

A Scottish error in the second tackle of the second half invited another Irish attack, which culminated in bench forward Peter Ryan crashing through three defenders from close range to score. O’Neill converted as Ireland regained an 18-14 lead.

After an Irish error inside their own half in the 56th minute, Faughlin burnt off the cover defence from the turnover set on the right to score his first try. Smithson added the extras to extend the Scottish lead to 26-18.

After Ireland were able to send the restart to play dead, the resultant field position from the goal line dropout saw interchange hooker Ryan Guilfoyle burrow over from dummy half late in the tackle count to keep Ireland in the game at only 26-24 down after 62 minutes when O’Neill converted.

Scotland in turn found touch from their restart to set up their own field position. From the scrum win, Faughlin timed his run into the backline nicely to reach out through two defenders to score his second try. Smithson’s conversion gave Scotland a 32-24 buffer with 16 minutes to play.

As both sides strived for the breakthrough try in the closing stages, more Irish errors gave the Scots critical field position with six minutes to play. Hogg capitalised by sending send a pin point cross field kick for winger Damien Genocchio to score and seal the Scots’ place in the final four. Smithson converted to round out the 38-24 win.

Scotland face traditional rivals England in their final qualifying game before the Semi-Finals back at Cabramatta on Wednesday at 4pm AEST, while the Irish face defending champions Australia in their final group game at the same venue at 2pm AEST Wednesday.