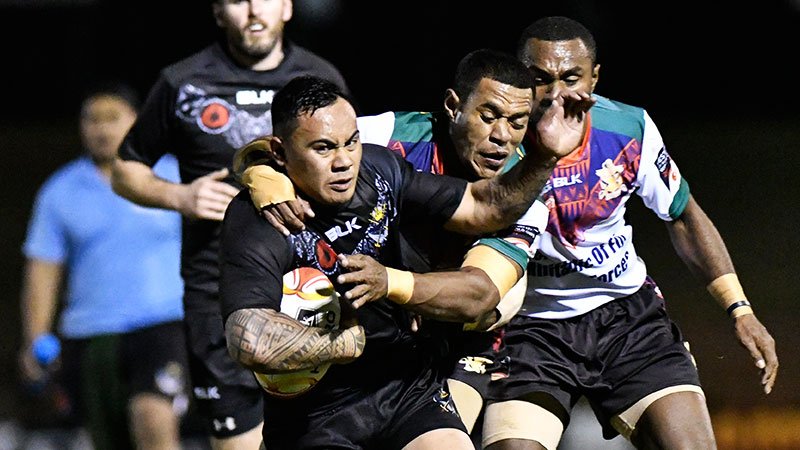 Fiji Army too strong for NZDF

Fiji Defence Forces have put in a commanding performance to well and truly stamp their authority on the competition, running away with a thumping 40-6 victory over New Zealand at Windsor Sporting Complex on Sunday evening.

Despite the first half being a tug of war battle with both teams defending their line with sheer determination, Fiji came out firing in the second 40 minutes with five unanswered tries to claim their second consecutive victory.

The opening exchanges of the contest were entertained by some brutal defensive efforts from both sides as they both looked to lay a strong platform for their skillful outside backs – and it was Fiji who looked the most threatening, causing constant havoc for New Zealand’s defence.

Not shy to throw the ball around, Fiji were showcasing their incredible natural talent with a well-executed backline movement almost paying dividends, only for New Zealand’s defence to hold strong and force an error.

Despite both teams playing an attacking brand of football, consistent handling errors would ruin their respective chances of claiming first points – matched with some physical collisions holding out any chance of a breakthrough try throughout the first 20 minutes.

Enjoying a vast majority of possession, it was inevitable that Fiji would claim the first try of the afternoon, as fullback Aaron Joshua Vadika burst through some flimsy defence before offloading to Marika Takilakibau who crossed to the left-hand side of the posts.

New Zealand were amounting a heap of pressure on Fiji and were desperately looking for an immediate response, and a quick break through the middle-third saw Robert Brockhurst reap the rewards with a maiden try right under the posts.

More razzle dazzle football saw a wave of momentum behind Fiji as they were looking to regain the lead, and it wasn’t long before Ekemasi Vesivalau was on the receiving end to score their second try in the right-hand corner.

Just when New Zealand were looking to close out the first half with an attacking raid on the opposition goal line, Fiji fullback Joshua Vadika showed pure speed to pounce on a loose ball and evade a host of defenders, with winger Lefani Takikalou supporting on the inside and evading a number of scrambling defenders to cross for their third try of the contest.

After an erratic opening 40 minutes with both teams offering their dynamic attacking prowess, it was Fiji who was holding onto a slight 12-6 advantage.

Fiji were pressing to extend their lead with a number of attacking raids on New Zealand’s goal line, but they were unable to take full advantage with further handling errors coming at a costly price.

New Zealand weren’t doing themselves any favours with simple errors seeing them cemented in their own-half, and a penalty right in front of the posts was too good to refuse for halfback Illikena Niuvusa Niumataiwalu who slotted the two points to take an early eight point advantage after 45 minutes.

Moments after extending their lead, some quick thinking from Niumataiwalu saw him stab a short grubber past the defensive line, before offloading to Takikalau who crossed for his second try of the game.

Niumataiwalu was unable to convert from the sideline with the score quickly racing out 18-6 with 25 minutes remaining.

Fiji were brimming with confidence after their fourth try had them at a comfortable lead, and fullback Aaron Josh Vadika bursted through the line off the kick-off, before quickly evading his counterpart and headed towards the right-hand corner, with the cover defence able to cut him down but only for Vadika to offload to Takikalau who worked his way over to complete his hat-trick of tries.

Illikena Niuvusa Niumataiwalu capped off a brilliant performance with a try of his own in the last 10 minutes, but that wouldn’t be the last of their tries with Samalila Vala and Rotate Rakauro Tobe joining in on the action with two brilliant long-range tries, with Fiji running away with a commanding 40-6 victory over a valiant New Zealand outfit.