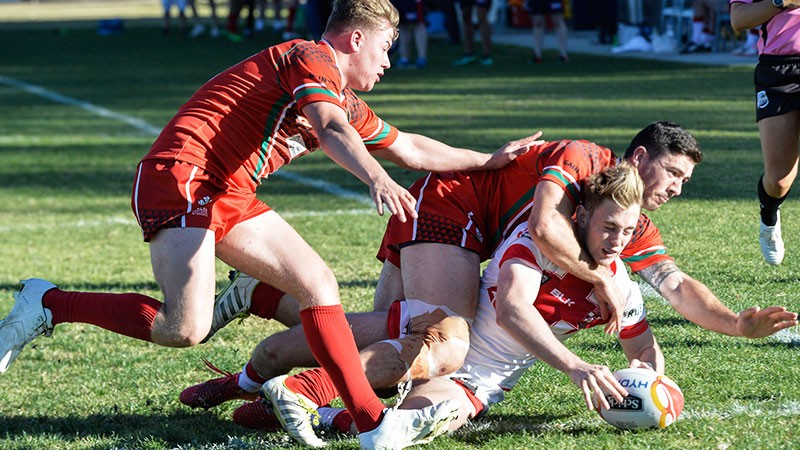 England bounce back with win over Wales Universities

England have avenged their tough defeat to Australia with a promising 22-4 victory over arch-rivals Wales at Windsor Sporting Complex on Sunday afternoon.

Three unanswered tries in the opening 15 minutes saw England take an early 16-0 lead as Wales struggled to match their dominance, but despite having a man sent-off in the second half – Wales made sure the scoreline would finish more respectable as their strong defence were able to hold out England just to one try throughout the remaining course of the game.

Jason Bass put in a starring performance for England with two tries in the first half, while Marcus Webb was a shining light in a losing side with a late try of his own.

England dominated the opening exchanges with their brick-wall defence earning themselves valuable field position, and they took full advantage when Matt Ross scurried over from dummy-half for the first try of the game.

Brimming with confidence, it wasn’t long before they extended their lead with Jason Bass showing great speed to evade his counterpart to score in the left-hand corner.

Starved of possession throughout the opening 20 minutes, Wales soon found themselves building pressure with repeat sets on England’s goal-line but were unable to capitalise with an unforced error ruining their chances.

The Wales-England rivalry was clearly evident with some brutal defence from both sides fuelling some heated exchanges – immediately sparking both sides with England constantly threatening the opposition goal-line but Wales responding with some committed defence of their own.

Wales valiant defensive efforts continued to withstand the constant pressure mounting from England, and despite a shaky start they were able to keep the scoreline to 16-0 at half-time.

It was a polar opposite start from Wales as they were still searching for their first try straight after half-time, but their hard-work was soon relieved when Dad Hellard was controversially sent off for striking.

Just two tackles later, England winger Elliot Hall looked to have scored his team’s fifth try of the afternoon when he finished athletically in the left-hand corner, only for the referee to deem the last past forward.

Wales were playing a gutsy style of football despite being a man short with some strong attacking raids, but were still unable to find a breakthrough after being held-up twice over the try-line.

England’s one man advantage had little impact early in the second-half but it was inevitable they would extend their lead with a pinpoint kick from Ben Stead landing in the arms of Aaron Hall to score the match-sealing try.

Ben Stead converted from in-front of the uprights to extend the lead to 22 points with just 15 minutes remaining.

Wales wouldn’t go down without a fight despite the scoreline and were desperately fighting for a maiden four-pointer in the closing stages, and a fumble from England saw Marcus Webb pounce on the loose ball to eliminate the chance of a complete shut-out.