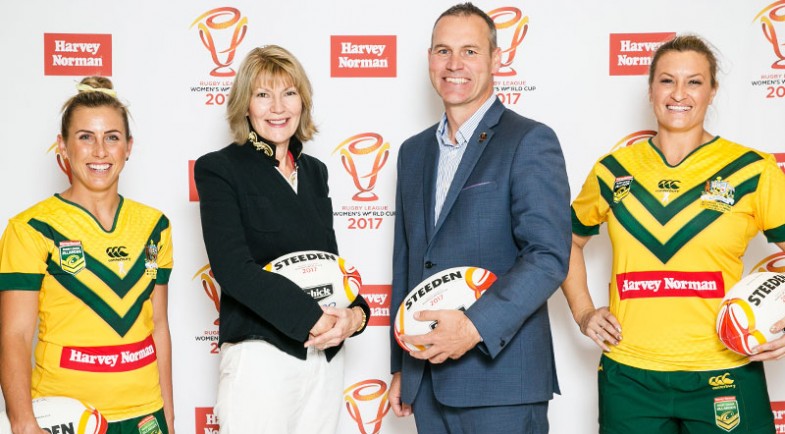 Harvey Norman is Australia’s strongest corporate supporter of women’s Rugby League with a long-standing investment in the women’s game from the grassroots through to the elite level.

The partnership with Harvey Norman will further elevate this year’s tournament. For the first time in the history of the game, the Women’s Rugby League World Cup will be played as a standalone event, not part of a user pays Festival.

The Women’s Rugby League World Cup 2017 will see both the men’s and women’s finals played as a double-header in Brisbane on 2 December 2017 – the first time two World Cup winners will be crowned on the same day, on the same stage.

“Harvey Norman, under the stewardship of Katie Page, have been great advocates for women in sport and leadership, both at a grassroots and domestic level, and it’s fantastic to see them extend this support to the international stage.

“Not only do we want this to be a memorable event for all involved, but we want this tournament to set a successful framework for future Rugby League World Cups to build upon as the women’s international game evolves.”

“It is less than a week since the Harvey Norman Jillaroos won the ANZAC Test against the Kiwi Ferns in such a sensational game and it gives us all a sense of what we have to look forward to with the Women’s Rugby League World Cup.

“Harvey Norman recently announced our support of both the NSW Rugby League and Queensland Rugby League female pathways programs and we have been the naming rights partner of the Jillaroos since 2015.

“Now, as the Official Major Partner of this year’s Women’s Rugby League World Cup, Harvey Norman can support our female athletes, and those that make their training and development possible, up through the ranks to the highest level of competition.

“Every young girl and woman with a passion for playing Rugby League will be inspired to excel when they see first-hand how far they can go if they have the talent and the determination.”

Harvey Norman will receive brand integration through on field grass logos and in-stadia signage at Southern Cross Group Stadium in Cronulla, where the pool stage and semi-finals will be contested from 16 November to 26 November 2017.

The RLWC2017 Organising Committee would also like to acknowledge the NSW Government, Queensland Government and Federal Government for their support of the Women’s Rugby League World Cup 2017.