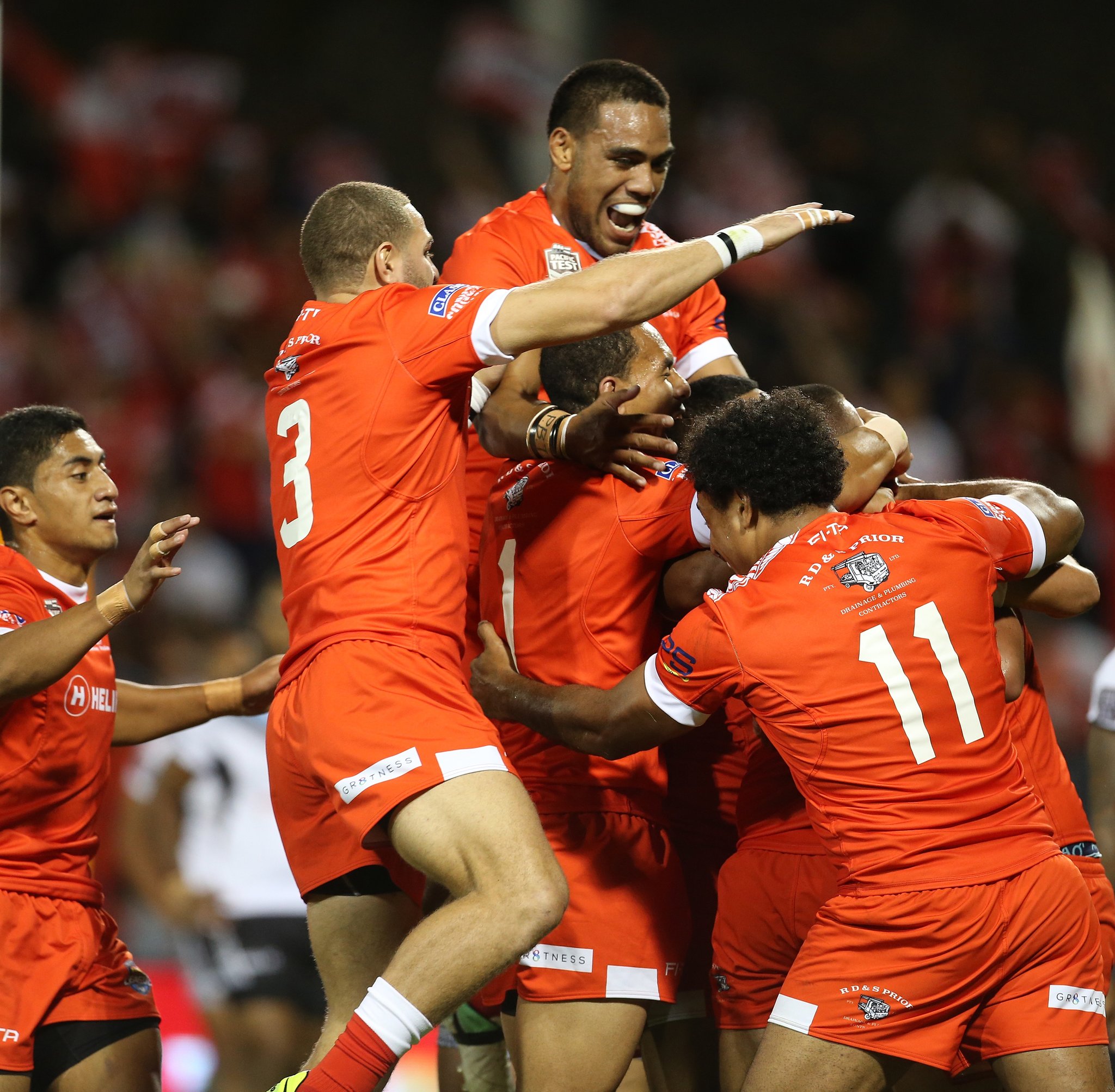 A double to front-rower Leilani Latu has seen Tonga come from behind to defeat Fiji 26-24 in a brutal encounter at Campbelltown Stadium.

A monster hit from Manu Vatuvei on Kane Evans with three minutes remaining allowed Tonga the chance to win the game with Siliva Havili finding Latu in-close for the Panthers forward to go over for the match winner.

It was the veteran and rookie show on the Tongan left-edge throughout the night with Vatuvei and Moses Suli running for a combined 334 metres.

Completion rates and missed tackle counts went out the window for the Pacific Test as both sides threw caution to the wind on a number of plays with only a week’s preparation heading into the match.

Both starting props Saifiti and Evans provided Fiji with plenty of go-forward against the more-fancied Tongan forward pack, before Evans left the field after the collision with Vatuvei.

Early tries to Vatuvei and Latu had the Tongan side leading 10-0 early in the contest, before Fiji struck back with a pair of four-pointers of their own.

Tonga received some early luck in the contest when Latu was ruled to have stripped the ball off Evans backwards close to the line to regain possession.

Fiji were caught short as a result of the turnover and Wests Tigers rookie Suli found the veteran in Vatuvei to open the scoring in the sixth minute of the game.

Rabbitohs rookie Sitiveni Moceidreke put a strong shot on Latu to force the ball loose after points, but the Panthers forward extended the lead for the Tongan outfit when he steamrolled his way over after a strong charge from teammate Tony Williams.

Fiji bounced back in style with back-to-back tries to take the lead courtesy of two moments of magic from back-rower Viliame Kikau.

Fijian halfback Henry Raiwalui placed a pin-point kick between Bulldogs duo Will Hopoate and Brenko Lee for Kikau to pluck the ball out of the air and go over untouched.

Kikau then broke through past Tui Lolohea on the left-edge to find James Storer in support and bring the parochial crowd to their feet as the 35-year-old got over the line – his second try in consecutive Pacific Tests.

A Korbin Sims error after points would undo Fiji’s momentum with Roosters flyer Daniel Tupou planting the ball down in the corner to retake the lead.

Kevin Naiqama ensured Tonga’s advantage on the scoreboard wouldn’t last long at the break when the newly appointed skipper batted the ball back in the in-goal area to keep the ball alive for Titans recruit Ben Nakubuwai to have an open passage and get the ball down on the half-time siren.

Both sides were guilty of errors in the opening of the second half before Wests Tigers rookie Suli levelled up the game at 18-18 after Will Hopoate showed quick hands to get past a flying Suliasi Vunivalu who raced in to stop the raid.

Both sides went blow for blow in the final seven minutes until Latu ensured Tonga had the last say to defeat Fiji for the first time in their history.