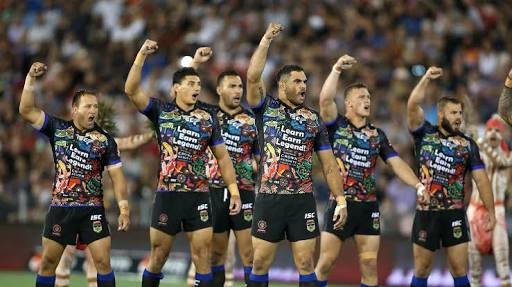 A first-quarter points-scoring blitz has propelled the Indigenous All Stars to a thoroughly-deserved 34-8 win over their World All Stars counterparts.

Johnathan Thurston was once again in majestic form as his side claimed their fourth win from seven matches to take the overall lead in the annual fixture.

An awe-inspiring pre-game Indigenous war cry led by Greg Inglis set the tone for what was a special night in Newcastle, with both teams hugging it out afterwards in an endearing show of mutual respect.

The smoke had barely settled when Joel Thompson made a huge break down the right edge before he dished a ball back on the inside to All Stars debutant Jack Bird who touched down next to the posts after just three minutes.

An Akuila Uate error gifted the Indigenous side a chance to double their advantage, and they wasted little time in accepting the gift with Blake Ferguson finishing off a slick backline move to score from the ensuing scrum.

Nothing seemed to be going right for the World All Stars who found themselves down by 16 points at the first break when Nene Macdonald’s midfield error sparked a breathtaking counter-attack that ended up with Thurston popping a pass to Ash Taylor for their third try of the evening.

An error-riddled second quarter threatened to finish scoreless until David Mead managed to wriggle his way to the chalk to peg one back for the World All Stars minutes before the main break.

Then, with less than 60 seconds to go in the half, the World All Stars gave their hopes of a comeback a huge shot in the arm when Macdonald finished off a slick right to left movement to cut the gap to eight points.

That’s as close as they got however, as the Indigenous All Stars woke from their slumber to extend the lead with another scintillating movement as Bevan French got into the clear with his first touch before he banana kicked back inside for crowd-favourite Thurston to score to make it 22-8.

As good as that try was, it paled in comparison to the noise generated when Greg Inglis burst into the clear courtesy of two monster fends before the Rabbitohs fullback was eventually dragged down 20 metres short of the line.

While that play didn’t lead to points, the crowd of 20,241 didn’t have to wait too long for another reason to get out of their seats as Thurston produced a freakishly accurate kick to hit Dane Gagai on the chest for another four-pointer.

Penrith fans would have rejoiced when Leilani Latu collected a short line dropout in the fourth quarter and bulldozed through the defence to score a try reminiscent of Royce Simmons’s famous 1991 grand final match-sealing play.

The only sour note to the night was a potentially serious injury to Raiders skipper Jarrod Croker whose left leg was caught in an awkward tackle midway through the third quarter.