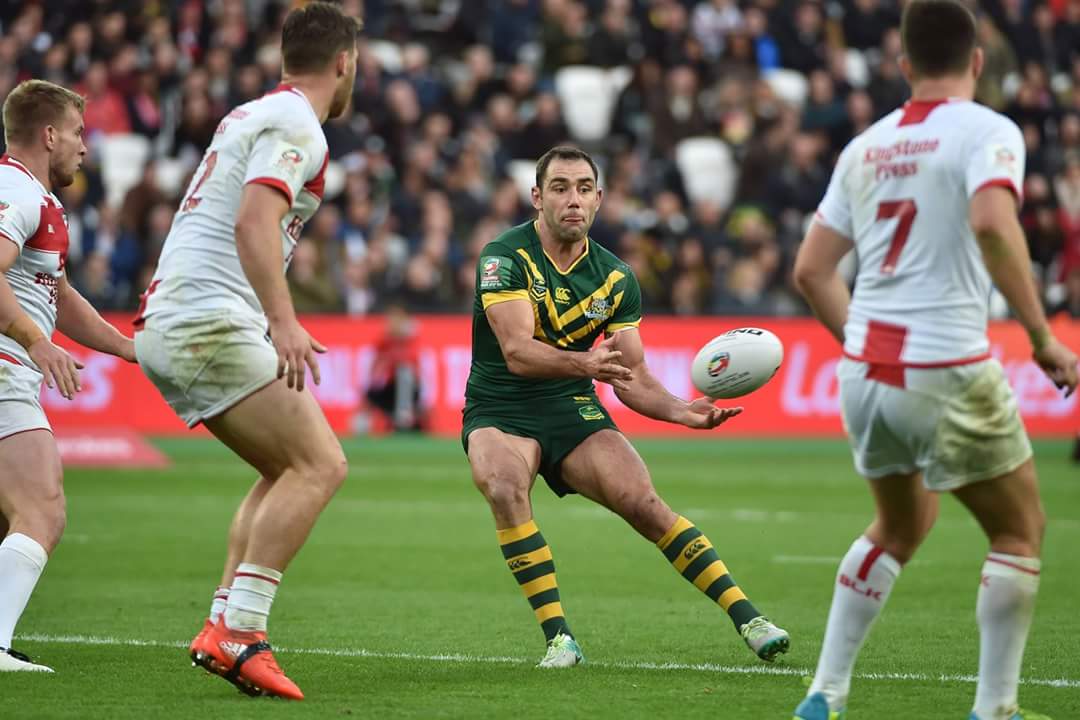 Kangaroos too strong for English in London

The Australian Kangaroos have eliminated England from the Four Nations tournament with a 36-18 win at London’s Olympic Park.

The equation was simple for Wayne Bennett’s Wall of White – they needed to win to ensure their place in the final at Anfield next weekend – but it proved to be too big a task against a slick Australian side.

As a result, New Zealand qualify for the final to play the Kangaroos despite their shock last start 18-all draw with Scotland.

Of concern for the Kangaroos however were concussions to veteran duo Greg Inglis and Sam Thaiday, who both failed to finish the game.

Crucial second-half tries to Inglis, Matt Scott, Josh Dugan proved England’s undoing with almost all of it orchestrated by man of the match Cooper Cronk.

With Australia up 10-6 at half-time, Inglis’s try came just two minutes into the second half when he caught England’s short side napping on a simple scrum play.

Scott helped expand that lead when he crossed the white stripe in the 56th minute despite the presence of four English defenders.

Three minutes later it was Dugan’s turn when he capitalised on a weaving run from Cronk by producing a long-range effort to score.

Widdop offered England a glimmer of hope in the 66th minute when he sliced through Thurston and Cordner to score.

The Kangaroos back-rower’s effort would lead to punches between England Sam Burgess and Australian firebrand David Klemmer however – with the latter left bloodied in the aftermath.

England winger Ryan Hall scored his customary try for the match in the final five minutes but his counterpart Valentine Holmes would have the last laugh with a spectacular effort in the corner at the death.

England had been the better of the two sides in the opening half hour and posted an early 2-0 lead thanks to a Gareth Widdop penalty goal in the 11th minute.

Australia equalised six minutes later through the boot of Johnathan Thurston after halves partner Cronk was on the receiving end of an ugly shot from England winger Jermaine McGillvary while kicking.

McGillvary soon repaid his team in the 26th minute when he crossed for the game’s first try following handy lead-up work from Widdop and fullback Jonny Lomax.

Australia hit back with an almost identical try to England’s when winger Blake Ferguson crossed over in the corner in the 35th minute.

Schoolboy errors throughout the first half from Widdop and hooker Josh Hodgson – who both failed to kick for touch following penalties – came back to bite them when another Thurston penalty goal helped them to a four-point lead by the break.