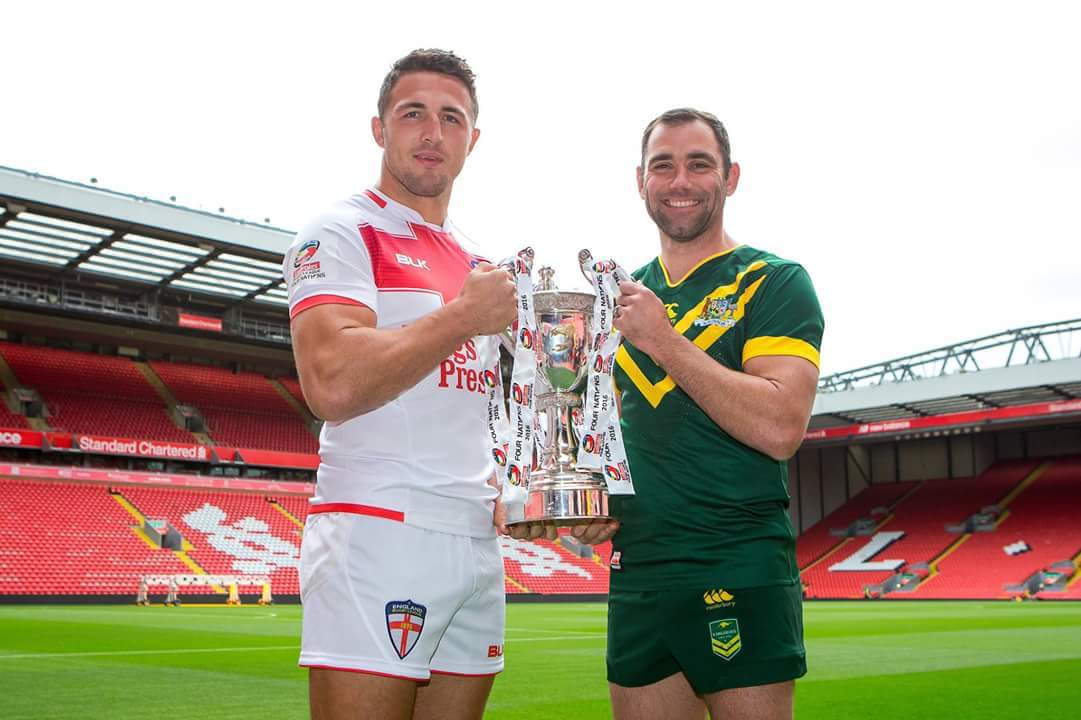 A spot in the Four Nations final is on the line when England take on Australia at London’s Olympic Stadium.

While the Kangaroos are virtually assured a spot in the Anfield decider, England simply must win and hope results go their way if they want to progress.

England currently sits in second place on the ladder with one win and a points differential of +25, while New Zealand also have one win, but are burdened by a negative differential of -5.

Should New Zealand beat Scotland by, let’s say, 36 points, England would then need to beat the Kangaroos by seven points to advance.

If the Kiwis win by 50, and England claim a 12-point victory, then Australia would miss out. But judging by last week’s results, that scenario seems highly unlikely.

The hosts kept their tournament alive with an unconvincing 38-12 win over Scotland last weekend that saw the Bravehearts score two unanswered tries in the first 30 minutes before a quick double to Elliott Whitehead turned the game on its head.

It was a performance that disappointed their coach Wayne Bennett, who was unhappy with their efforts, especially in the first half.

His reshuffle of the squad asked more questioned than it answered with back-up five-eighth George Williams earning man-of-the-match honours on the back of three try assists. It remains unclear whether Gareth Widdop will return to the side.

Australia, meanwhile, raced out of the blocks against New Zealand to lead 10-0 inside 15 minutes, but had to hold on grimly as Kiwis halfback Shaun Johnson was denied a last-minute try that would have seen the game end in a draw had it been awarded and he kicked the subsequent conversion.

Halfback Cooper Cronk was rested but will return this weekend. Sam Thaiday (knee) is in doubt for the match, while Johnathan Thurston should be fine after picking up a knock late in the New Zealand game.

Watch out England: It would be easy to say that Australia’s biggest threat is their spine. No one can dispute that. But the playmakers can’t weave their magic unless their forwards lay a platform, and that’s exactly what they’ve done so far in the Four Nations. The Kangaroos entered the tournament with pundits questioning whether there was enough size in their pack, and the big men have responded in style, averaging more than 2000 metres per game in the wins over Scotland and New Zealand. It hasn’t just been the starters who have gotten the Kangaroos on the front foot, with Trent Merrin (157 metres against Scotland) and David Klemmer (159 metres against New Zealand) running riot off the bench. Even the back five have been hard to stop, with the quintet combining for nearly 750 metres against the Kiwis. If England can’t win the ruck then the likes of Cooper Cronk, Johnathan Thurston and Cameron Smith will exploit the open expanses.

Watch out Australia: Wayne Bennett has been preparing for this moment ever since he accepted the role of England coach. His alleged rivalry with Australia mentor Mal Meninga has dominated headlines in recent weeks and while it won’t be his primary motivation, a win over his counterpart would likely draw a smile from the master coach. Bennett famously helped Stephen Kearney take down the Kangaroos at the 2008 World Cup final, and his knowledge of the Australian players will be a huge advantage for the English as they look to keep their tournament hopes alive.

Key match-up: Josh Hodgson v Cameron Smith. The two best hookers on the planet go head-to-head for the third time in 2016, with a spot in the Four Nations final on the line. The ledger is locked at one win apiece after Hodgson’s Raiders downed the Storm in Round 23, before Smith guided the minor premiers to a thrilling two-point win in the preliminary final to end Canberra’s season. The Storm skipper edged his counterpart as the Dally M Hooker of the Year on a night where Hodgson was widely tipped to take out the top gong at rugby league’s night of nights.

The history: Played 13; England 2, Australia 10, Drawn 1. It’s been 21 years since England defeated the Aussies in a Test match, with their last win way back in 1995 when they snuck home 20-16 in London. Since then, the Kangaroos have won 10 straight against the ‘Mother Country’, and have averaged over 30 points per game. England can take solace from the last meeting when they shot out to a 12-4 half-time lead, only to be overrun by second-half tries to Ben Hunt and Greg Inglis.

The way we see it: Wayne Bennett will have his troops fired up no matter what happens between Scotland and New Zealand. His inside knowledge of Australia’s key personnel will be important, but it won’t be enough to overcome the Kangaroos. Expect Darius Boyd to play a starring role in what will be his first showdown with Bennett as an opposition coach. Australia by 8.