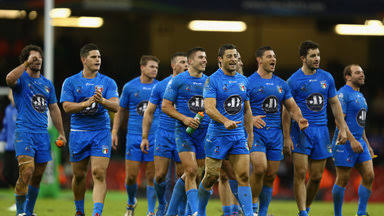 RLWC2017 CEO, Andrew Hill, said the confirmation of Italy as the final team completes what is an exciting RLWC2017 line-up.

“I would like to congratulate Italy on their qualification for next year’s Rugby League World Cup.

“The European play-off concludes what was a fantastic 18 months of qualifying matches and the number of teams who competed reflects the growth of the international game.

“The 2017 tournament will feature the greatest rugby league players from across the world all aiming to win what will be the most competitive World Cup ever.

“Fans are in for a real treat and should not delay in securing their tickets for this exciting international event.”

The RLWC2017 will be co-hosted by Australia and New Zealand, with three pool games in Papua New Guinea, from 27 October until 2 December 2017.

As the play-off winners, Italy will take position “EQ3” in Pool D of the RLWC2017 draw and will play matches in Cairns, Townsville and Canberra.

The 22-man Azzurri squad for the recent European qualifiers featured seven players who are currently attached to North Queensland-based teams, along with former Raiders’ great, Terry Campese – so should receive strong support during next year’s tournament.

Fans will be able to watch the greatest rugby league players from across the world for as little as $10 kids/concessions, $20 adults and $45 for a family of four.

Tickets for all 28 games of the five week tournament are now on sale from RLWC2017.com.