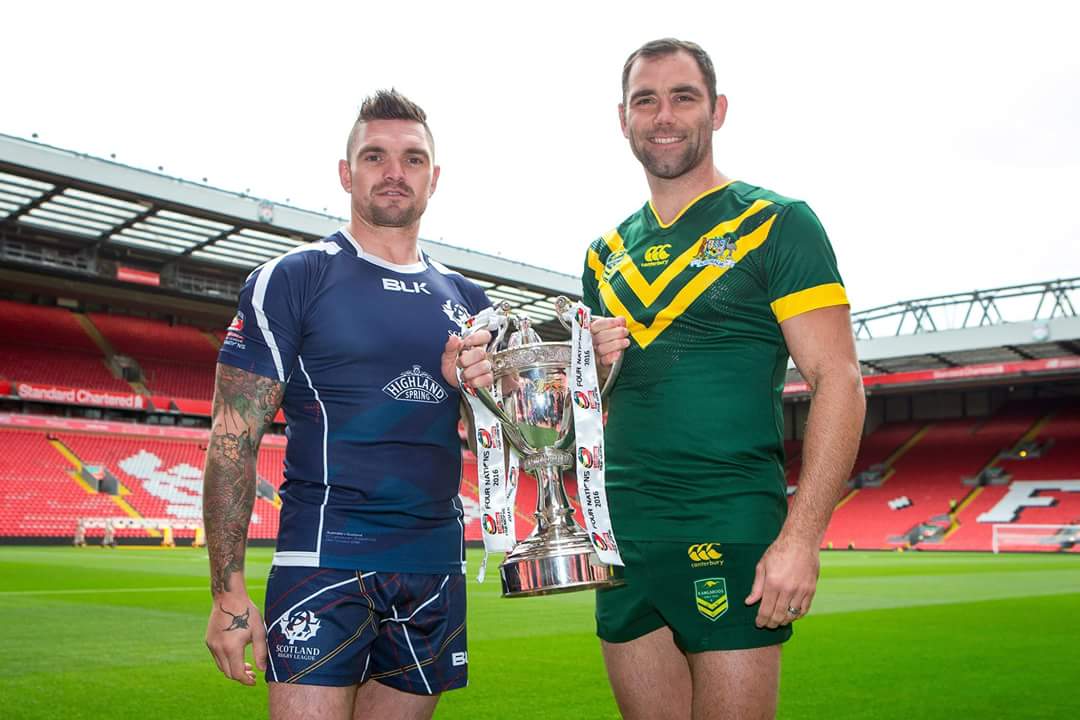 Scotland get their first ever taste of Four Nations footy when the tournament gets underway this Friday night local time (Saturday morning down under) at Hull’s Lightstream Stadium.

There is no question the Bravehearts will start heavy underdogs in this one, despite being boosted by a few NRL stars and the likelihood Australia coach Mal Meninga will tinker with his line-up to get some of the back-up players some game time ahead of the business end of the tournament.

The green and golds had a successful warm-up outing in Perth a fortnight ago, comfortably accounting for New Zealand 26-6, while Scotland also blew the cobwebs out with a runaway 48-16 win over a Cumbria Select XIII at Craven Park in Barrow last Friday.

In a short tournament with no semi-finals (the two best-placed teams after the round robin matches contest the November 20 final) each result is important so Meninga needs to balance the need to get his reserves some game time with ensuring the Kangaroos don’t drop a game they’d have looked at as a certain win.

The outcome of that is that every player who didn’t feature in Perth gets a run with five debutants named. Matt Moylan at fullback, Justin O’Neill at centre, James Maloney at five-eighth, Jake Trbojevic at lock and Jake Friend on the bench. Winger Josh Mansour and prop Aaron Woods return to the line-up after missing out in Perth due to their respective weddings.

Scotland coach Steve McCormack has plenty of NRL experience to call on in Cowboys pair, fullback Lachlan Coote and centre Kane Linnett, plus ex-Titans prop Luke Douglas and Dragons centre Euan Aitken. Five-eighth and 2013 Man of Steel Danny Brough plus fullback Matty Russell are two of the senior men who will need to guide Scotland around although Russell could shift to the wing to accommodate Coote who would otherwise slot into five-eighth next to Brough. Super League premiership-winner, Wigan’s Lewis Tierney, is set to make his Test debut on the wing after scoring a try in his first Scotland outing last Friday.

Watch out Kangaroos: There’s no sugar-coating it: Scotland will need a lot to go right to threaten the green and golds. Given Meninga’s drastically different line-up compared to a fortnight ago, Scotland will hope some tentativeness in the new structures could give them an opening. Their best hope will be to stay with the Kangaroos early and find a way to get in front by around the 60-minute mark then try and hold on. Coote at either fullback or five-eighth and Brough in the halves will need to find a way to create some points against the Aussies if the forwards can go close to parity in the middle.

Watch out Bravehearts: Scotland face serious threats across the park. Despite the new-look playmaking roster the Braveheats will still have to deal with a seriously power-packed forward unit. Wests Tigers big man Aaron Woods plays his first game of the post-season after missing the Perth warm-up while Manly star Jake Trbojevic had a brilliant year. Tyson Frizell and Shannon Boyd made bright starts to their Test careers and Bulldogs tyro David Klemmer didn’t miss a beat and will now get the chance to unleash from the opening whistle.

Key match-up: Matt Moylan v Lachlan Coote/Matty Russell. The two fullbacks on show will each play a key role; with the Kangaroos’ completely overhauled line-up, how Moylan helps Maloney and Cronk gel (and Jake Friend when he is presumably injected to give skipper Cam Smith a rest) will be crucial not just to how this match plays out but how Meninga plans the rest of his tournament. On the other hand if Scotland are to spring the mother of all upsets they’ll need Coote (or Russell) to do a stellar job in helping the likes of Brough create and seal a whatever opportunities they can.

The history: Australia and Scotland have yet to meet in an international game.

The way we see it: It will take a monumental upset for the Kangaroos to go down here. We’ll tip Meninga’s men to get the job done by at least three tries and if they click, a bigger score could be in order.