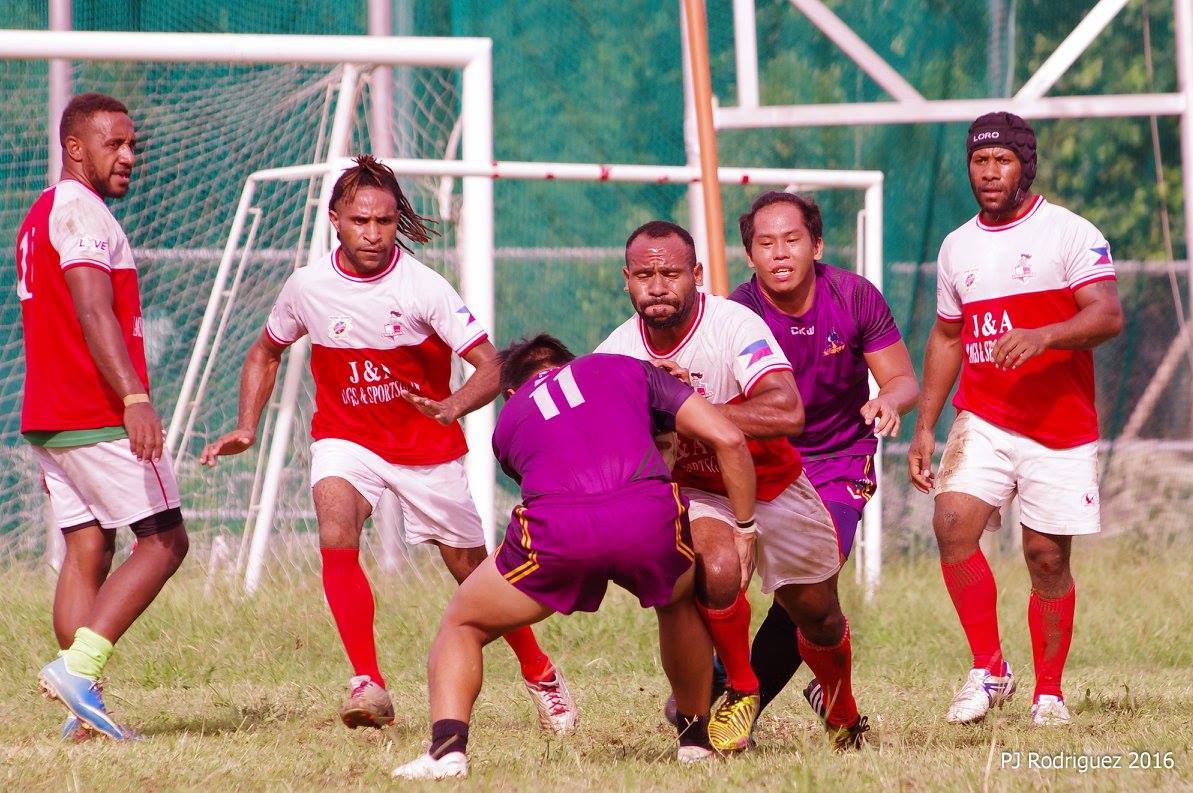 On the eve of the first Rugby League competition in the Philippines. Typhoon Karen hit landfall with Legazpi City so therefore Bicol University and the Albay Sports Complex directly in its path!

But with 51 Rugby League pioneers riding on a bus for 13hours to get from Manila to Legazpi City, not even Typhoon Karen could stop them from playing. With Isaac Kepu the UB Toro Team Manager saying on Saturday afternoon the 15th of October “Is better if we can still have one game today because we dont know it might be the same tomorrow.”

With a lull in the typhoon later on that afternoon and permission to play being granted from local Government officials. “The Greatest Game of All” got under way at the Bicol University, Albay Sports Complex.

A short Facebook report from Paul Sheedy the Philippines National Rugby League (PNRL) Vice President and Manila Storm guest player noted “We got 1 and a half games completed today with the Manila Storm beating the UB Toros 6-0 and the Central Luzon Crusaders up 6-0 over Albay when inclement weather stopped play. The second half will be played tomorrow along with the remaining 2 matches.”

By scoring the first try in the tournament Michael Tome Jnr of the Manila Storm will go down in PNRL/PTRL Rugby League history as the inaugural Erick Paul Estepa Elefante Cup tournament’s first try scorer and Benny Noki as the first player to convert a try!

On the evening of the second day of the tournament Vice President Paul Sheedy posted on the PNRL Facebook message board “Awesome day today the typhoon cleared and it was a typical humid Philippines day. The second match from yesterday was concluded with the Central Luzon overpowering the Albay Vulcans with a great power running game and offloading that was too much for a predominately Filipino team. Try scorers were #10,7,13 conversions #3 and #4.

Our first match today was a ripper between the local Albay Vulcans up against the favourites UB Toros in what was an exciting match with the Vulcans coming from behind to upset the much fancied Toros 10-4. Aggressive defence and outstanding ball movement was a highlight of this often at times brutal clash. It was an extremely courageous effort by the Vulcans who had to back up from the mornings conclusion of their first game and had the local crowd in raptures.

The last match of the first round of the Erick Paul Estepa Elefante Cup was played out between the Central Luzon Crusaders and the Manila Storm. Kick off was at 2pm. Played on a dry pitch both teams played with a great level of skill and the result was in the balance until the final play. Both teams could count themselves unlucky with some dubious refereeing decisions resulting in a tense hard fought 4-0 victory to the Crusaders who remained the only undefeated team.

On a footy note there is a lot of PINOY talent that we saw on display and we put some names down that really impressed us and some with natural ability and size that with more experience would be able to play local A Grade back in Australia.

Special mention must go to PNRL development officer Ric Bellen a resident of Albay who put this all together and was optimistic about the show going on even with a category 3 Typhoon bearing down on us.
Yeah we’re just over the moon with what we’ve all managed to create Erick. When I came out of retirement in 2013 for the tour here, this is what I wanted to achieve and grow. This is my biggest accomplishment in my entire footy career.”

The first round of the season was not just historic for being the first Rugby League competition of the PNRL/PTRL in the Philippines. But was also historic because the Head Coach of the first round’s unbeaten side was a Papua New Guinean (PNG) Woman by the name of Angela Tangam Kual, a second year accounting undergraduate studying at the Adventist University of the Philippines in Cavite. Angela hails from the Highlands region in the Enga province of PNG, and must be one of the first female coaches around the Rugby League world coaching a country’s number one club side!

For the record the results for the inaugural Erick Paul Estepa Elefante Cup are as follows: