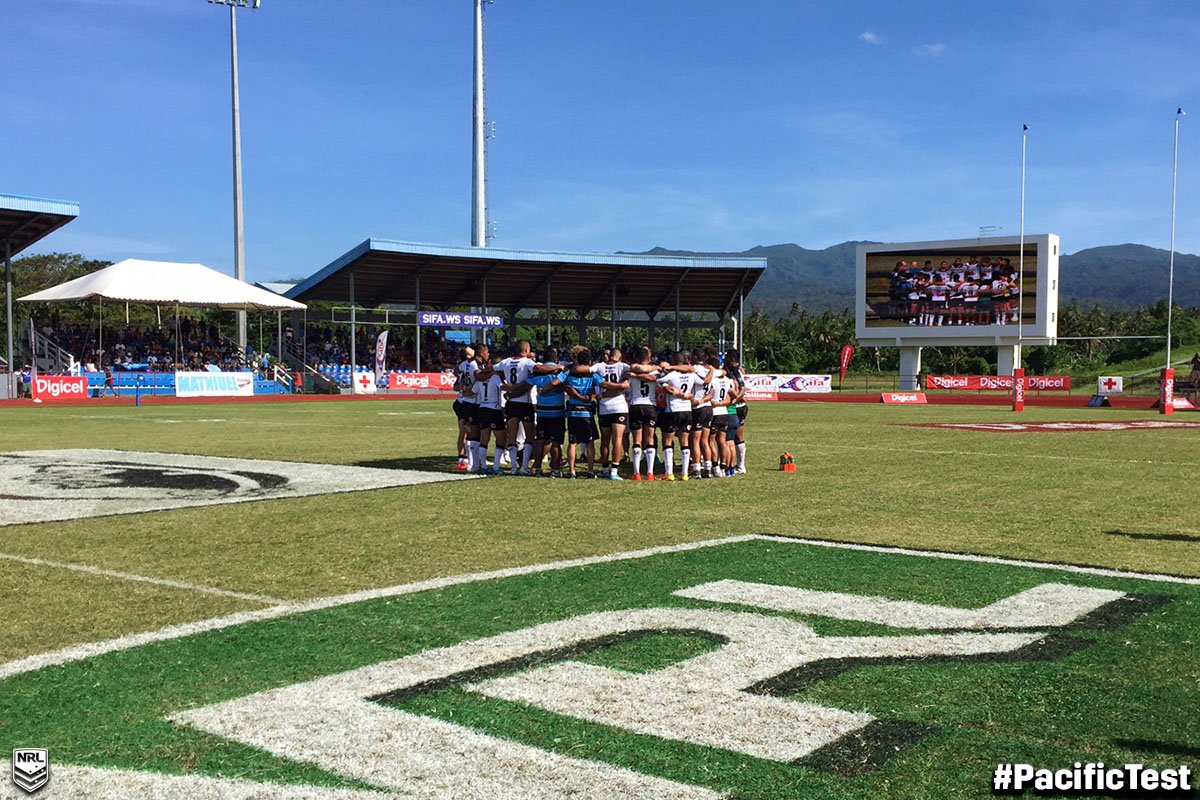 Fiji have come back from 18-0 down after 20 minutes to steal a wonderful 20-18 win over Samoa at Apia Park on Saturday afternoon.

A 90-metre intercept try to Bulldogs and Bati winger Tyrone Phillips – the only scoring play of the second half – handed Fiji an unlikely lead they desperately clung onto until the final siren when the celebrations erupted.

In what was the first ever official Test match in Samoa, it looked like the home fans would be enjoying a runaway win as big Sam Kasiano inspired his country to an 18-0 lead after almost as many minutes.

Poor handling from Fiji was also a factor early but once Kasiano went off and the passes started to stick for the Bati their ball movement and second phase play caused countless headaches for Toa Samoa as they ran in three tries of their own to trail by just two at the break.

Lanky Bati fullback Sitiveni Moceidreke had a whale of a game, providing sting with some huge kick returns and kicking brilliantly, grubbering for one try and launching one of the biggest 40/20 kicks in recent memory.

Veteran hooker James Storer’s defence was critical as the desperate Bati absorbed a ton of second-half pressure and he also wrestled over for a valuable try of his own.

Forwards Korbin Sims, Eloni Vunakece and Kane Evans played big knocks while for Samoa, Kasiano was the best of the forwards in a game where Junior Paulo, Ken Maumalo and Sam Lisone made big contributions.

The first half itself was a classic tale of two halves, neatly separated by a two-minute drinks break on 20 minutes.

Prior to that, the Sam Kasiano-inspired Samoans barged their way to an 18-0 lead. Post the drinks break, Fiji fixed up their errors without compromising on their creative ball movement to storm back with three tries of their own and trail by just two at half-time.

Kasiano barged over for first points in just the fourth minute, backing into the line and shaping to pass on a wraparound play before spinning out of the movement to stretch out one giant arm to plant the ball down.

A dropped ball coming out of territory from winger Marcelo Montoya and later a penalty kick that failed to find touch heaped pressure on the Bati and shortly after giant Warriors winger Ken Maumalo pushed through Montoya on Fiji’s left flank to extend the lead. A wonderful sideline conversion into a stiff breeze from Matt Wright ensured Samoa climbed in sixes.

When Samoa reclaimed a bomb with a fresh set of six at the end of their next set Maumalo had a four-minute double when he brushed through some more flimsy defence and the drinks break couldn’t come soon enough for Fiji.

It did the trick though; Fiji got in range just four minutes after the break through some great ball movement and second phase play and Montoya was on hand to make up for his earlier blunders to cash in on an overlap to get his side on the board.

Montoya set the Bati back on the attack when he screamed into a gap on the back of a quality Kane Evans offload.

Errors started to creep into the Samoan game while their sets lacked the same sting as earlier on when Kasiano was causing no end of headaches. Drops from Mason Lino and Paulo hemmed them in their own end and when a lovely grubber from Moceidreke was pounced on by Manly centre Brayden Wiliame, the Bati had clawed themselves back to within two points at half-time.

The first 20 minutes of the second half saw no tries scored but plenty of opportunities created – included a monstrous 40/20 kick from Moceidreke that was more like a 30/5 – but neither team was quite able to land the killer blow.

Samoa looked like scoring their first try since the 20th minute when they camped on the Bati line in the 60th minute until an opportunistic intercept and 90-metre run from Phillips handed Fiji the lead for the first time in the game, going up 20-18.

Handed three straight penalties to get back in range, Fiji missed a golden opportunity to go further ahead when Roosters forward Eloni Vunakece brushed off Pritchard and Kasiano and only had to plant the ball over the line, but a wonderful try-saver from fullback David Nofoaluma kept things close.

With the clock starting to wind down every change of momentum became critical and a cold drop inside his own 10 from Phillips helped Samoa to three straight sets on the Bati line but some great scrambling defence repeatedly repelled the Samoans until a pushed offload from Nofoaluma cost them possession and the Bati hung on to a historic victory.