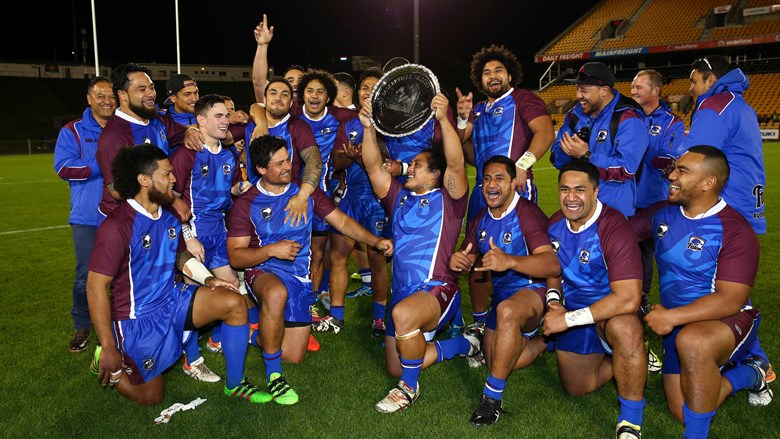 For the second time this season, Akarana Falcons have unleashed a dominant second-half performance to stun rivals Counties Manukau, taking out the 2016 NZRL National Premiership final 32-12 at Mt Smart Stadium.

Two weeks ago, the Aucklanders turned on an 18-point half-time deficit into a six-point win on the same ground, inflicting the champion Stingrays with their only loss of round play.

This time, Counties were ahead only 8-6 after a closely contested opening stanza, but lost their grip on the title, when they conceded the next 16 points after the restart.

Winger Polima Siaki was on the end of a break from captain Dylan Moses, accepting the final pass from Taylor Daniels to cross in the corner and snatch the lead.

Moments later, Daniel Palavi was over by the posts, followed by Eddie Purcell, both touchdowns converted by diminutive Zae Wallace.

Now trailling 22-6, the Stingrays gave themselves a sniff of hope, with Gibson Popoalii grabbing his second try of the night.

But there was no way back for the South Aucklanders, with prop Siliga Kepaoa and winger Arden McCarthy running in two more tries to extend Akarana’s winning margin.

The Falcons last won the title in 2013, but have not returned to the final since. They very nearly slipped out of this final, with a loss to Canterbury Bulls in Christchurch last week, but were not to be denied with the trophy within their grasp

“It’s been a bit of a long season, but good to finish it with a win,” said Moses, who moved from his regular position in the second row to stand-off for the occasion.

“Counties are a quality side and they were never going to give up, so we had to keep playing our game.

“This probably hasn’t been the be the best defensive competition, but when it mattered most, we came up pretty well.”

Palavi was named player of the day, but powerful prop Tevita Satae was not far behind, proving a damaging runner whenever he had the ball in hand.

For coach Keith Hanley, it was his second national title in two days, having guided the Falcons 17s side home at the NZRL National Youth Tournament in Rotorua on Friday.